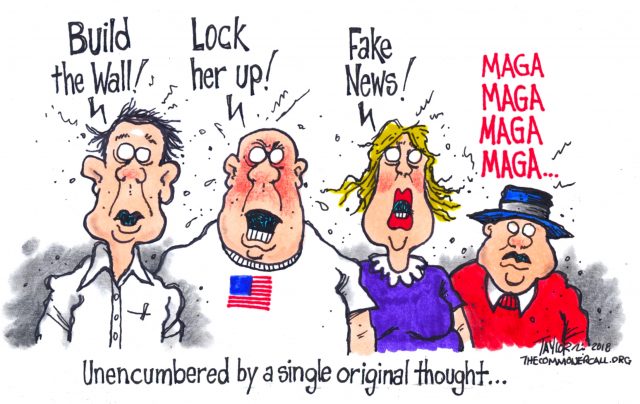 “All propaganda should be popular and should adapt it intellectual level to the receptive ability of the least intellectual of those whom it is desired to address. Thus it must sink its mental elevation deeper in proportion to the numbers of the mass who i has to grip. …The receptivity ability of the masses is very limited, and their understanding small; on the other hand, they have a great power of forgetting. This being so, all effective propaganda must be confined to very few points which must be brought out in the form of slogans.”

“We got elected on Drain the Swamp, Lock Her Up, Build a Wall. … This was pure anger. Anger and fear is what gets people to the polls.”

…A 2014 fMRI study, also published in Current Biology, found that it is actually possible to reliably predict whether a person is a liberal or conservative just by observing their brain activity while being showed threatening or disgusting images, such as mutilated bodies. Specifically, the brains of self-identified conservatives were more active overall in response to the frightening scenes. It is important to emphasize that it doesn’t necessarily matter whether the fearful message holds up to scrutiny. The amygdala response is a highly automatic one. Trump need not make a cohesive argument—he only needs to press the brain’s buttons with anxiety-provoking emotional content. … Read the Rest