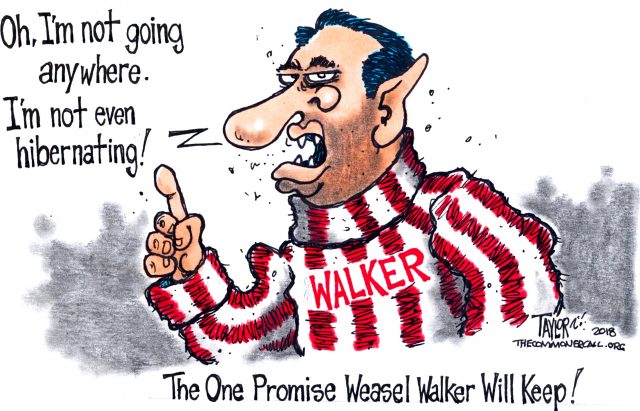 What has happened in Madison this week with the hard right Republican legislature preemptively kneecapping the administration of Democrat Governor-elect Tony Evers and Attorney General-elect Josh Kraul before they even have a chance to take the oath of office is a brass knuckle legislative coup. While it is shocking the republicans would take such action it is not surprising; after all, that is what fascists do; abandon legal niceties, tradition and the normal transition of power. All those vestiges of democracy are as dead to the GOP as the Pleistocene Age of woolly mammoths and saber tooth tigers.

Unfortunately, the response of legislative democrats and the Democratic Party of Wisconsin is neither shocking nor surprising, they have mustered a barely meek rebuke in the face of a fascist coup. True to form, the democrats flutter their hankies and rattle their tea cups in opposition and then offer … nothing to rollback the lawlessness.

Contrary to dreams and prayers that Weasel Walker would slink off to some trash yard burrow, get use to it: He ain’t going anywhere far from running state government. I’m betting the Republican legislators will even get him an office in the Capitol.

As with far too many democrats and progressives there is a numb denial of what is happening in the nation; in an act of bitterly ironic karmic payback, we have rapidly transformed into a fascist state on the road to outlawish cruelty as any of the banana republics installed by U.S. corporations across Central America in the 1950’s and 60’s.

In the midst of all the hub-bub I have been struck by the languid, limp language of the state democratic response; as usual we find the thinnest gruel when it comes to DNC and DPW use of language. Being skilled fascists, republicans lob nuclear word grenades to attack their enemies, stir up paranoia and trigger their followers to carry out violent attacks on their opponents, democrats reach into a silk purse for scented cotton balls of rhetoric. As an example:

Check out the Monday MSN story on Evers addressing the brewing coup. You can link to the brief report here, but check out the language Evers uses to rally the troops to the building threat of disenfranchisement:

“It goes to the heart of what democracy is all about,” Evers said at a Sunday news conference held at a Milwaukee law firm. “I think it’s the wrong message, I think it is an embarrassment for the state and I think we can stop it.”

Notice the use of the passive voice: “I think”.

Three times in one sentence?

Well is the coup wrong or not? I guess Tony will think about it and get back to us about that.

And then there is that passive-voiced “message”. The Rethuglicans are not passing along a “message” — they are taking an action to undo our government; they have staged a coup. Just like other fascist revolts.

In response, Tony flutters a hankie accusing the GOP of “embarrassment”.

Tony, really, a coup is no “embarassment” — it is a baseball bat up against the rib cage of Wisconsin representative government. And besides, have we ever seen the Walker rethuglicans blush with embarrassment even once? No.

Tony went on, the story noted: “He also held out hope Walker might stop the bills, but Walker has not voiced any opposition to date. “His legacy will be tied to this,” Evers said of Walker.”

Of course it will be, Tony. That is the point; “Hope Walker might stop the bills.” Really Tony? Where have you been for the past eight years? Expecting Walker to do the right, honorable, honest thing is like expecting Donald Trump to get through the day without piddling on the Constitution. WTH, Tony, it will be the Koch brothers’ final slap at the people of Wisconsin. Say it in simple, straight forward, forceful language, for godsake:

The rethuglicans are staging a fascist coup against the citizens of Wisconsin.

On Wednesday, the Governor-elect issued a letter to Weasel Walker which carried on the tradition of DPW vacuous political language written on puffs of lavender-scented mist in which he described the Republican actions to end his administration before it begins as “extremely disappointing”.

Laying down the law, Tony declared “I must request” that the governor not sign the Rethuglican legislation. Explaining the reasoning for his request of the Emperor of Underground Rodent Nests, Tony said appointments “should” not be jammed through. (Can you believe it, after that full frontal Tony assault, the rethuglicans actually ignored Tony’s polite request and slammed through 82 Walker appointees yesterday.)

He ended his offering to the Czar signing off “Respectfully”.

WTF, Tony, why not get down on bended knee!

I imagine this is how Trump ‘respectfully’ signs off every time he requests an advance of his allowance from Vladimir Putin.

I can imagine the GOP legislative leaders sent the steam room towel boys at the Maple Bluff County Club scurrying off for a fresh bucket of icy Heinkins after reading Tony’s letter.

A presser by legislative dems Tuesday night was no better. In tones suitable for Christmas Eve midnight mass one dem legislator speaker after another rolled out one focus group-massaged and diluted buzzword after another, giggling about about possible legal action.

Breakfast through a straw

I imagine Tony, the legislative dems and those geniuses at the DPW get their morning nourishment lukewarm, through a straw. Or perhaps an IV drip.

As has been the case since coming to rule the quaint Province of Wisconsin, the Princeling of Kochlandia has once again been handily aided by the political malpractice of Wisconsin democrats and the fascists have racked up a BIG win in Wisconsin. Contrary to dreams and prayers that Weasel Walker would slink off to some trash yard burrow, get use to it: He ain’t going anywhere far from running state government. I’m betting the Republican legislators will even get him an office in the Capitol.

How a real progressive raises hell

Now if you want to see how a real progressive democrat handles malfeasance and deceit by the powerful, check out a short video of dem presidential candidate Richard Ojeda’s visit to General Motors, here.

With republicans staging similar coups two years ago in North Carolina and now in Michigan. And North Dakota and back again in North Carolina.All of this is dress rehearsal for Donald Trump, should he bumble and lose in 2020. In the meantime — wake up DPW — this is fascism and we need to RESIST.

The Republicans’ plan is fairly obvious—to keep Wisconsin’s government in an unchanging zombie state until 2022, when the Republicans hope to regain control of the governor’s mansion and attorney general’s office.

magine if a governor lost in November but then got his cronies in the legislature to pursue a bill he could sign in his final days in office stripping away his successor’s powers and essentially keeping him in charge.

The current Republican-controlled Wisconsin legislature introduced a slew of legislation on Friday in a rare lame-duck session aimed at curbing the powers of incoming Democratic governor Tony Evers as well as the newly elected attorney general, Josh Kaul. Many of these proposals would shift decision-making from gubernatorial control to Wisconsin’s legislature, now firmly in Republican hands.

For example, currently the governor appoints six of the eleven members of the Group Insurance Board, which oversees state health benefits. One of the proposed power-grabbing laws would add four members to the board, all selected by the legislature, and require all six of the governor’s appointees to be subject to Senate confirmation.

Another board, Walker’s Wisconsin Economic Development Corporation (WEDC), is the focus of an even more egregious theft of the new governor’s powers. …