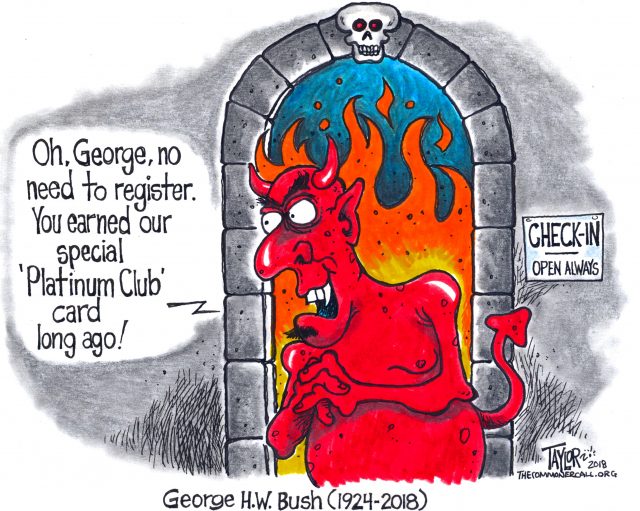 [Editor’s Note: This past weekend was awash in high praise for former president George H.W. Bush. The lofty ad infinitum praise of supposed statesmanship, wisdom, decency and ‘public service’ had little tethering to the truth of the man or his administration and earlier gigs as vice-president, head of the CIA and his personal life. The coverage was a cringe worthy display of the mainstream media’s servile deference to the ruling ‘elite’. Fortunately, the Intercept boldly injected a dose of reality about what H.W — and similar grifters of the corrupt corporate ruling class — was really about. — Mark L. Taylor]

THE TRIBUTES to former President George H.W. Bush, who died on Friday aged 94, have been pouring in from all sides of the political spectrum. He was a man “of the highest character,” said his eldest son and fellow former president, George W. Bush. “He loved America and served with character, class, and integrity,” tweeted former U.S. Attorney and #resistance icon Preet Bharara. According to another former president, Barack Obama, Bush’s life was “a testament to the notion that public service is a noble, joyous calling. And he did tremendous good along the journey.” Apple boss Tim Cook said: “We have lost a great American.”

In an age of Donald Trump, it isn’t difficult for his hagiographers to paint a picture of the late Bush Sr. as a great patriot and pragmatist; a president who governed with “class” and “integrity.” It is true that the former president refused to vote for Trump in 2016, calling him a “blowhard,”and that he eschewed the white-nationalist, alt-right, conspiratorial politics that has come to define the modern Republican Party. He helped end the Cold War without, as Obama said, “firing a shot.” He spent his life serving his country — from the military to Congress to the United Nations to the CIA to the White House. And, by all accounts, he was also a beloved grandfather and great-grandfather to his 17 grandkids and 8 great-grandkids.

Facts matter. The 41st president of the United States was not the last Republican moderate or a throwback to an imagined age of conservative decency and civility.

Nevertheless, he was a public not a private figure; one of only 44 men to have ever served as president of the United States. We cannot, therefore, allow his actual record in office to be beautified in such a brazen way. “When a political leader dies, it is irresponsible in the extreme to demand that only praise be permitted but not criticisms,” as my colleague Glenn Greenwald has argued, because it leads to “false history and a propagandistic whitewashing of bad acts.” The inconvenient truth is that the presidency of George Herbert Walker Bush had far more in common with the recognizably belligerent, corrupt and right-wing Republican figures who came after him — his son George W. and the current orange-faced incumbent — than much of the political and media classes might have you believe.

He ran a racist election campaign. The name of Willie Horton should forever be associated with Bush’s 1988 presidential bid. Horton, who was serving a life sentence for murder in Massachusetts — where Bush’s Democratic opponent, Michael Dukakis, was governor —  had fled a weekend furlough program and raped a Maryland woman. A notorious television ad called “Weekend Passes,“released by a political action committee with ties to the Bush campaign, made clear to viewers that Horton was black and his victim was white.

As Bush campaign director Lee Atwater bragged, “By the time we’re finished, they’re going to wonder whether Willie Horton is Dukakis’ running mate.” Bush himself was quick to dismiss accusations of racism as “absolutely ridiculous” yet it was clear at the time, even to right-wing Republicans operatives such as Roger Stone, now a close ally of Trump, that the ad had crossed a line. “You and George Bush will wear that to your grave,” Stone complained to Atwater. “It’s a racist ad… You’re going to regret it.”

Stone was right about Atwater, who on his deathbed apologized for using Horton against Dukakis. But Bush never did.

He made a dishonest case for war. Thirteen years before George W. Bush liedabout weapons of mass destruction to justify his invasion and occupation of Iraq, his father made his own set of false claims to justify the aerial bombardment of that same country. The first Gulf War, as an investigation by journalist Joshua Keating concluded, “was sold on a mountain of war propaganda.”

Fabrication of intel for war

For a start, Bush told the American public that Iraq had invaded Kuwait “without provocation or warning.” What he omitted to mention was that the U.S. ambassador to Iraq, April Glaspie, had given an effective green light to Saddam Hussein, telling him in July 1990, a week before his invasion, “[W]e have no opinion on the Arab-Arab conflicts, like your border disagreement with Kuwait.”

Then there is the fabrication of intelligence. Bush deployed U.S. troops to the Gulf in August 1990 and claimed he was doing so in order “to assist the Saudi Arabian Government in the defense of its homeland.” As Scott Peterson wrote  in the Christian Science Monitor in 2002, “Citing top-secret satellite images, Pentagon officials estimated… that up to 250,000 Iraqi troops and 1,500 tanks stood on the border, threatening the key US oil supplier.”

Yet when reporter Jean Heller of the St. Petersburg Times acquired her own commercial satellite images of the Saudi border, she found no signs of Iraqi forces; only an empty desert. …

(Commoner Call cartoon by Mark L. Taylor, 2018. Open source and free for non-derivative use with link to www.thecommonercll.org )

The Friday night death of former President George H.W. Bush has opened a wellspring of tributes from famous friends and foreign dignitaries commending the generous friend, accomplished politician and skilled diplomat they saw in the 41st president.

Contrasting with so much praise is one particularly appalling anecdote that has also bubbled to the surface from the depths of the Bush White House’s so-called “War on Drugs.”

Bush, as you may not know, once used the Drug Enforcement Agency to lure a black high school student to Lafayette Park near the White House to make a drug buy that the president would use to illustrate a public health crisis on national TV.

It’s no surprise that after the death of former president George H.W. Bush we’re seeing media pundits, advocates and popular historians promote a rosy view of his tenure as president. In the era of Donald Trump, there’s a tendency to portray every Republican leader of the past in a nostalgic, sugar-coated way.

The first thing that caught my eye was a report on CNN’s website that included a tweet from the president of Covenant House, a charity that runs shelters across the U.S. for homeless youth and which has a historical connection to the Catholic Church. The tweet included photos of the former president and the late first lady Barbara Bush hugging children, implying that Bush was an important advocate for people with AIDS.

Bush had said in a television interview that if he had a grandchild who was gay he would “love” the child but would tell the child he wasn’t normal. And like Reagan, he stocked his Cabinet with anti-gay zealots.

Then I saw a tweet from Yahoo News with a quote from the well-known historian Jon Meacham, describing Bush as a man who “believed that he was not a Republican president — he was a president,” noting that “there’s something very old-fashioned about that.”

Perhaps that was what Bush “believed,” but it was far from the truth. Bush was as captive to the evangelical right on social issues — and thus a decidedly Republican president — as was his predecessor, Ronald Reagan, who cultivated religious conservatives as a potent political force and bowed to their anti-LGBTQ agenda as the AIDS epidemic mushroomed in the 1980s. …

George H.W. Bush, the one-term president who died on Friday at age 94, is often overlooked by history, despite having presided over the last truly bipartisan “grand bargain” and the end of the Cold War. But if there’s one context in which his name, along with that of another man, is regularly invoked, it’s when political campaigns make coded racist appeals to white voters.