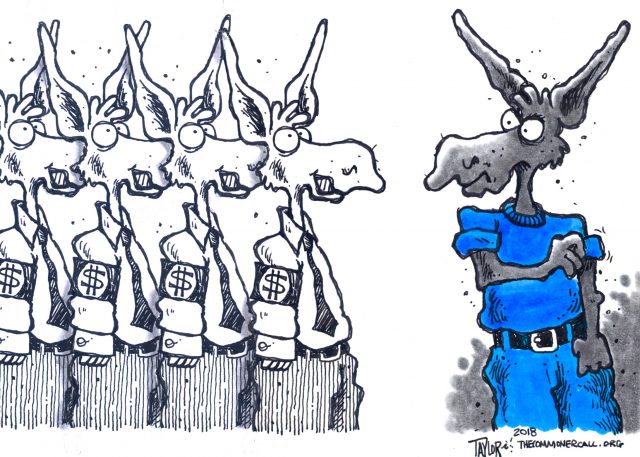 Will it be the corporate dems or the dems representing the rights & future of the people?

When Democrats take control of the House in early January, they’ll have two kinds of leadership – one from the top of the party’s power pyramid, the other from its base. With formal control, Nancy Pelosi and Steny Hoyer can brandish huge carrots and sticks to keep Democratic lawmakers in line. With grassroots support, a growing number of those lawmakers can – and should – strategically step out of line to fight for progressive agendas.

Pelosi and Hoyer have been running the Democratic machinery in the House of Representatives since 2003, and they’re experts at combining liberal rhetoric with corporate flackery. Pelosi is frequently an obstacle to advancing progressive proposals. Hoyer is significantly worse as he avidly serves such “constituents” as giant banks, Pentagon contractors and other Wall Street titans. Together, the two have often functioned as top-drawer power tools in the hands of powerful corporate-military interests.

Pelosi is a longtime wizard at generating and funneling hundreds of millions of election-cycle dollars, and as speaker she’ll wield enormous power over committee assignments. But she must keep Democratic House members minimally satisfied – and along the way that should mean yielding more power to the Congressional Progressive Caucus. Buoyed by wins in the midterm elections, the caucus includes two-fifths of all Democrats in the House.

That’s where the other kind of leadership comes in – if a hefty number of self-identified progressives in Congress go to the mat to vigorously represent progressive constituencies. For that to happen, a dubious aspect of the Progressive Caucus past must not repeat itself.

“When historic votes come to the House floor, party functionaries are able to whip the Progressive Caucus into compliance,” I wrote six years ago. A grim pattern set in during the Obama presidency, “with many Progressive Caucus members making fine statements of vigorous resolve – only to succumb on the House floor under intense pressure from the Obama administration.”

Ultimately, the most profound progressive leadership for Congress isn’t in Congress at all. It’s in communities and movements across the country… No matter how intense the top-down pressure gets from Speaker Pelosi, we should insist from the bottom up that members of Congress stand their ground for progressive principles.

Backing down had tragic consequences for the nation’s healthcare system. In September 2009, Progressive Caucus leaders sent a letter to President Obama pledging not to vote for any healthcare bill “without a robust public option.” They wrote: “Any bill that does not provide, at a minimum, a public option built on the Medicare provider system and with reimbursement based on Medicare rates – not negotiated rates – is unacceptable.” Six months later, every member of the Progressive Caucus abandoned the demand and voted for a healthcare bill with no public option at all.

There are encouraging signs that Congressional Progressive Caucus leaders are using new leverage to gain more power for progressives. After meeting with Pelosi on November 15, Co-Chair Pocan and First Vice-Chair Jayapal released a statement saying “we are pleased that Leader Pelosi shares our commitment to ensuring that CPC members are represented proportionally on the key exclusive committees – including Ways and Means, Energy and Commerce, Appropriations, Financial Services and Intelligence.”

Progressive leaders can gain persuasive influence largely because they’re advocating for proposals that – as polling verifies – have wide support from the U.S. public, such as a $15-an-hour minimum wage (59 percent), Medicare for All (70 percent), progressive criminal justice reform (65 percent) and higher taxes on the wealthy (76 percent). Behind such political agenda items is an activist base eager to achieve many programs that have been obstructed by most top-ranking Democrats in Congress.

Clearly, much of the Democratic Party’s momentum is now coming from the left. And many of the positions that the timeworn Democratic leadership has staked out are now being overrun – outmatched by the cumulative power of dynamic social movements that have generated electoral clout. Medicare for All is a case in point, with numerous likely Democratic presidential candidates climbing on board.

We are the progressive leaders

Ultimately, the most profound progressive leadership for Congress isn’t in Congress at all. It’s in communities and movements across the country – nurturing diverse progressive strengths in many aspects of social change, including at election time.

No matter how intense the top-down pressure gets from Speaker Pelosi, we should insist from the bottom up that members of Congress stand their ground for progressive principles. And – no matter how fervently they embrace the “progressive” label – if congressmembers aren’t willing to fight for those principles, then the grassroots should mobilize: to create an outcry, to lobby, and to consider launching primary challenges. No elected officials should be immune from scrutiny and accountability.

In a bid to move the party’s leadership in a more bold direction, progressive groups and activists mobilized urgently in recent weeks to pressure House Democrats to elect Rep. Barbara Lee (D-Calif.) as the party’s next Caucus Chair.

But, ultimately, their campaign was not enough to overcome the party establishment’s support for the more “moderate” Rep. Hakeem Jeffries (D-N.Y.), who was elected on Wednesday by a vote of 123-113. Because the election was conducted by secret ballot, there is no roll call.

Jeffries’ victory over Lee was met with dismay by progressives, who viewed the anti-war congresswoman’s defeat at the hands of her House Democratic colleagues as yet another sign that the party badly needs a new direction.

“What is there to say anymore? The Democratic Party establishment needs to be primaried into oblivion,” Margaret McLaughlin, a member of the Metro D.C. branch of the Democratic Socialists of America (DSA), wrote on Twitter.

While Jeffries is a member of the Congressional Progressive Caucus (CPC), critics and reporters argued that his overwhelming reliance on big money donors and his positions on major issues raise serious questions about his commitment to the kinds of bold policies that swept “the most progressive freshman class” in U.S. history into office in the November midterms and gave Democrats control of the House.

“Jeffries is a big money Democrat and a member in good standing of [Gov.] Andrew Cuomo’s New York machine,” noted Huffington Post reporter Zach Carter. “There is no way to spin his victory over Barbara Lee as a sign the party is moving in a progressive direction.”

As The Economist noted in a profile of the New York congressman published last month, “Jeffries is not a member of the moderate New Democrats faction, but he often sounds as if he should be.”

“He is a fan of charter schools and fiscal rectitude,” The Economist reported. “Though he supports the principle of universal healthcare coverage, he speaks of ‘the importance of market forces and getting things done in a responsible fashion.’ Quoting Ronald Reagan approvingly, he suggests this means promoting a flourishing private sector outside the ‘legitimate functions’ of government.”

Additionally, critics recalled after he won Wednesday’s election that Jeffries issued a fawning statement in support of Israel as the nation carried out Operation Protective Edge, the vicious 2014 attack on the occupied Gaza Strip that left thousands of Palestinians dead.

Aida Chavez, a reporter for The Intercept, also called attention to Jeffries’ derisive 2016 comments about Sen. Bernie Sanders (I-Vt.), who he smeared as a “gun-loving socialist with zero foreign policy experience.”

With his victory over Lee, Jeffries will take the number five House Democratic leadership spot in the next Congress, replacing Rep. Joe Crowley (D-N.Y.)—who was ousted in June by democratic socialist Alexandria Ocasio-Cortez.

Responding to the New York Times‘ narrative that Jeffries’ win represents a victory for a “new” and younger generation of House Democrats, Waleed Shahid—communications director for Justice Democrats—argued that focusing on the age gap between Lee and Jeffries obscures their very real ideological contrasts.

“‘New generation’ can’t simply mean diversifying the ruling class. We need diverse representation and progressive politics,” Shahid concluded. “There were clear differences between Lee and Jeffries: message, policy priorities, and records of taking on the one percent and establishment in their own party.”