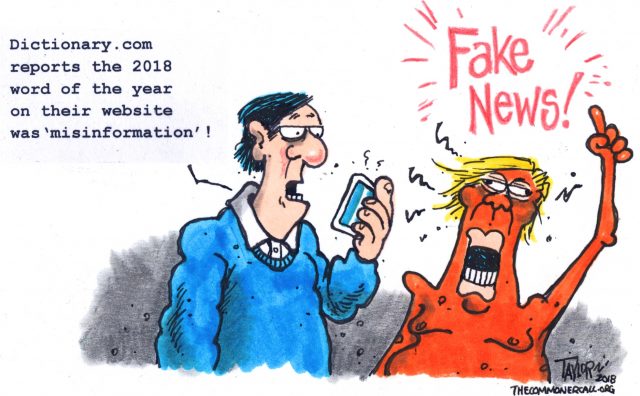 The rampant spread of misinformation poses new challenges for navigating life in 2018. As a dictionary, we believe understanding the concept is vital to identifying misinformation in the wild, and ultimately curbing its impact.

But what does misinformation mean? Dictionary.com defines it as “false information that is spread, regardless of whether there is intent to mislead.” The recent explosion of misinformation and the growing vocabulary we use to understand it have come up again and again in the work of our lexicographers.

However, the two are not interchangeable. Disinformation means “deliberately misleading or biased information; manipulated narrative or facts; propaganda.”

When people spread misinformation, they often believe the information they are sharing. In contrast, disinformation is crafted and disseminated with the intent to mislead others. Further confusing the issue is the fact that a piece of disinformation can ultimately become misinformation. It all depends on who’s sharing it and why. For example, if a politician strategically spreads information

While the word misinformation has been around since the late 1500s, the nature of how information spreads has gone through drastic transformations over the last decade with the rise of social media. For most individuals on social media, fact-checking is an afterthought, if it is a thought at all, and misinformation thrives.

This year, we saw technology platforms grapple with the role they play in the spread of misinformation. Critics blamed Facebook, in particular, pointing to the following:

Other tech platforms have made some very high-profile decisions on how to deal with individuals and communities who spread misinformation. This year, Twitter cracked down on millions of accounts that did not represent real human users for spreading misinformation. Several tech platforms, including Apple, Twitter, YouTube, and Facebook, banned the conspiracy theorist Alex Jones, who is especially known for spreading disinformation about school shootings. Another noteworthy banning happened in September when Reddit shut down the main subreddit dedicated to discussing the QAnon conspiracy theory; it had over 70,000 subscribers at that point.

Memes might seem trite to those unfamiliar with them, but they can be an efficient way to spread disinformation and conspiracy theories in a viral, insidious way. The subsequent spread of misinformation contained in memes can have serious, even violent consequences. Cesar A. Sayoc Jr., who was charged with sending 13 bombs in the mail to outspoken opponents of President Trump this October, drove a white van with memes plastered on the windows. His actions were stoked by the messaging common in political memes which often spread misinformation.

Regardless of how it spreads, misinformation is particularly rife when it comes to some specific areas.

This year’s presidential election in Brazil is a case study in the role misinformation plays in elections. WhatsApp is a popular forum for discussion of politics in Brazil; but the end-to-end encryption on this platform makes it extremely difficult to control the spread of false news stories and misinformation in general. The New York Times paired with Federal University of Minas Gerais, the University of São Paulo, and the fact-checking platform Agência Lupa on a project in which they looked at a sample of 50 viral political images that circulated on WhatsApp leading up to the Brazilian presidential election. They found that 56 percent of these images were misleading either because they were completely false, they contained images or data used out of context, they had unsubstantiated claims, or they weren’t from a trustworthy source. This case shows how disinformation strategically spread by political campaigns can become misinformation when it is picked up and spread by individual supporters.

Not all misinformation is tied so directly to politics. …