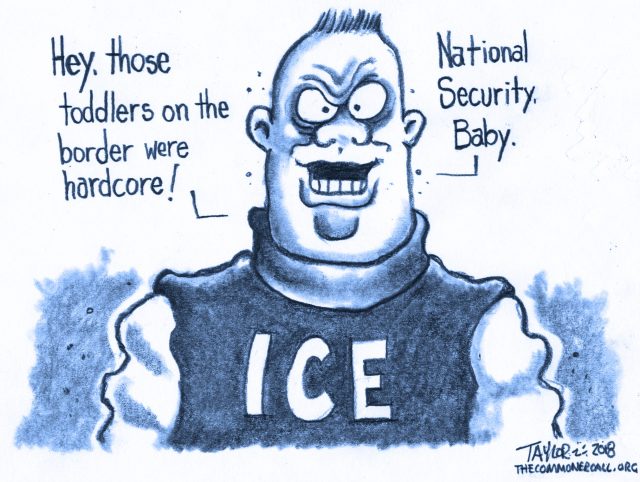 A callous and cruel system.

Thanksgiving weekend, but the barbarism of the Trump regime goes on apace. On Friday, plainclothes ICE officers in North Carolina ambushed and arrested Samuel Oliver-Bruno, a 47-year-old undocumented construction worker from Mexico in the U.S. for over 20 years who’s been living in the basement of a sanctuary church for 11 months while he petitions to stay here with his sick wife and teenage son. Oliver-Bruno left Durham’s CityWell United Methodist Church, part of the state’s growing faith-based sanctuary movement, for an alleged meeting with immigration officials, who told him he had to come in person to provide fingerprints for his petition.

Oliver-Bruno had come to the U.S. in 1994; he met his wife Julia here, and his son Daniel was born here. After long working construction jobs and helping raise Daniel – and with no criminal record – he and his family briefly visited Mexico a few years ago to see his ill father. When Julia’s lupus condition worsened, she had to abruptly return to the U.S. for open heart surgery; when, shortly after, Oliver-Bruno tried to return as well, he was arrested at the border, and the threat of deportation has followed him.

Arriving at the USCIS office Friday, Oliver-Brunohe was accompanied by faith leaders, family and members of Alerta Migratoria, an immigrants rights advocacy group. Once inside, the scene quickly plunged into chaos: Burly ICE thugs wrestled him to the ground as other clients shouted “No! No! No!” When his son tried to intervene, ICE guys handcuffed and arrested him, too. After they hastily strong-armed father and son into a waiting van, supporters surged around it, shouting “Shame!” and blocking it from leaving. Police eventually arrived, and 27 people were arrested.

During his sojourn at the church, Oliver-Bruno tried to explain his ongoing resistance. “I want to fight for my family – I don’t want to stay with my arms crossed,” he said. “I want the authorities to hear me and see the damage they’re causing.” To ICE, “Mr. Oliver-Bruno is a convicted criminal.” But to state legislators and others, he is fightinga “callous and cruel” system. “What is legal and what is just is often not the same thing,” said CityWell’s pastor Cleve May, one of those arrested. “For those who would take offense at us, (we) can only say to you, ‘We care more about justice than we do for laws.’” If you still take offense, watch video of the scene, and see a police state in action.

“Children were screaming and coughing in the mayhem,” the Associated Press reported. “On the U.S. side of the fence, shoppers streamed in and out of an outlet mall.”

Earlier on Sunday, U.S. authorities closed off both directions of the San Ysidro port of entry, which is one of the largest border crossings between the U.S. and Mexico.

“Imagine having tear gas launched at you after escaping gang violence/poverty while carrying your child,” Juan Escalante, a columnist at the Huffington Post, wrote on Twitter.

The demonstrations by Central American asylum seekers came amid reports that the Trump administration is looking to cut a deal with the newly-elected Mexican government to keep migrants out of the U.S. until their asylum claims are fully processed.

While U.S. President Donald Trump took to Twitter late Saturday to claim that asylum seekers will now be forced to stay in Mexico until their cases are processed, the incoming Mexican government officials said publicly that no such agreement has been reached.