The Republican Party lost ground in the Congressional and state elections earlier this month, but they continue to triumph in the all-important contests over words.

Republicans have been winning the “war over words” for years. First, the hard core political right wingers symbolically claimed the Bible and the American flag, turning them upside down. To them the Bible meant anything but the Golden Rule and compassion for the “poor,” so frequently noted in the Scriptures. They brandished the flag as a patriotic symbol to gag dissent, as a bandanna for waging war crimes, and as a fig leaf to hide the shame of their cruel domestic policies in the U.S.

During the late Forties, few Americans chose to call themselves “conservatives.” “Liberals” were ascendant, coming out of the FDR years. Under incessant associational attack on the word “liberal,” few politicians now brandish their beliefs as “liberals,” while many tout some of their views as “conservative.” 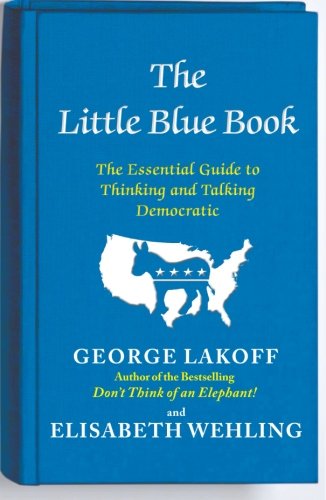 A great — short — resource for Democrats and progressives on how to frame the language for political debate and advocacy.

Given American history, this is quite a twisted linguistic victory. Tories (the conservatives of the Revolutionary era) sided with King George III against the American Revolution. Conservatives supported slavery, women’s disenfranchisement, and stood against the great progressive reforms by farmers and industrial workers in the late 19th and early 20th century. Conservatives opposed progressive taxation, social security, Medicare, labor union rights, and more recently, the civil rights, consumer rights, and environmental protections. Liberals led in support of these expansions of justice in our country.

Yet liberals are timid about using the liberal label. Instead they either often cite their “conservative” credentials, for example on spending, or use the word “progressive,” as their chosen new label. Liberals are not progressives on issues of war and peace, Wall Street and corporate welfare entitlements—to just name two differences.

When Hillary Clinton accepted her Party’s nomination for President of the U.S. in 2016, she explicitly called herself a “progressive.” Not even close for such a war-monger, who embraced the war outlaw Henry Kissinger, who was also a Wall Streeter, coddling the corporate supremacists with huge crony capitalism (corporate welfare). Clinton accepted huge speaking fees from Goldman Sachs and other mega-corporatists amounting to $200,000 or more for each closed door speech she gave.

Conservatives put “liberals” on the defensive by stigmatizing them as “big spenders” and for “expanding public deficits.” Never mind the conservative mega-deficits. “Liberals,” compromised by their campaign cash paymasters, were reluctant to accurately accuse the conservatives of building the burgeoning “corporate welfare” bonanzas or supporting runaway unaudited military budget waste arising from their 2017 tax cuts for the corporations.

When it came to voting, the Democrats played the same game as the Republicans. In 2017, 60 percent of the Democrats voted for a larger military budget than even Donald Trump requested from Congress.

Over the years, enhanced by Ronald Reagan’s rhetorical repetition, Republicans took away the words “liberty” and “freedom” from the liberals, who were left only with the crucial, bedrock word “justice” that they didn’t often want to hurl against the Republicans. Too bad, because the hardest word for the Republicans to hijack is “justice.” Note its rarity in that Party’s speeches and writings. Without “justice,” of course there is little “freedom” or “liberty.”

More recently, Republican extremists and the media have usurped the word “populist” to misuse it as a pretext to “divide and rule,” while the corporatists laugh all the way to the megabanks that are “too big to fail.” Populism was a political movement against gigantic concentrated corporate power of the banks and railroads over 100 years ago, on behalf of all the people. That is what the farmers and workers were driving their populist revolts to achieve.

The latest verbal usurpation is making “globalism” into a dirty word, as former Wall Streeter, Steve Bannon has done. Notice the absence of any qualifying adjective. There are different types of globalization. The word is used to  identify financial/corporate transnational creators of a global world order opposed to nationalism.  In reality, the other globalism brings together people who believe in global unity. This includes beneficial global treaties, normal commercial laws, and disaster rescue efforts.

Above all, there is civic globalization where the forces of just democratic societies unite with environmental (eg. climate disruption), worker, consumer, cooperative and charitable missions. Given the interdependencies of the natural environment and the mutual reinforcements of justice initiatives, we should talk much more about civic globalization as a counterweight to globalized corporations strategically planning and advancing their commercial priorities.

Turning “globalists” and “globalization,” without any adjectives, into pejorative stereotypes fosters other forms of prejudicial propaganda.

Free lesson from a republican

The Republican wordsmith, Frank Luntz has scoffed at the Democrats’ verbal ineptitude or indifference. Luntz coined the phrase “death tax” to replace “estate tax”, and with the media’s repetition almost got the Congress to repeal this tax that is overwhelmingly on the wealthy. Fortunately, in 2002 the Democrats blocked this all out Republican effort in the House and the Senate. Once when asked, what would he have called the “estate tax” were he a Democrat, Luntz smiled and immediately said “the billionaires’ tax.” His gift to the Democrats was not adopted as a moniker in this continuing plutocratically-driven struggle over mind-shaping words and phrases that so often serve to obscure contrary deeds.