Trump believes he is above the law. Despite his shady conduct during the campaign and his often illegal behavior in the White House, so far he’s right. Will that last, will history have him as above the law?

What does a single day in the Trump White House look like? In order of breaking news:

1) Trump dismisses the findings of his CIA to side with Saudi Arabia over their murder of journalist and US resident Jamal Khashoggi;

We’ll start with Trump’s attempt to prosecute his enemies, Hillary Clinton and former FBI Director James Comey. Not only is this the more damning of the multiple crises of a single day, but this also sheds light on why shady Matthew Whitaker is acting attorney general? Trump Wanted To Order Justice Dept. To Prosecute Comey & Clinton.

White House counsel McGahn warned Trump that he had no such authority to prosecute Clinton and Comey and to do so was an abuse of power. Ordering prosecution, not just an investigation, would trigger Congress to “investigate the president’s role in a prosecution and begin impeachment proceedings”.

“The encounter was one of the most blatant examples yet of how Mr. Trump views the typically independent Justice Department as a tool to be wielded against his political enemies. It took on additional significance in recent weeks when Mr. McGahn left the White House and Mr. Trump appointed a relatively inexperienced political loyalist, Matthew G. Whitaker, as the acting attorney general.”

Sub-head: Whitaker advised the president on launching a new special counsel while working as chief of staff for Attorney General Jeff Sessions.

Former attorney general Jeffrey Beauregard Sessions III and deputy attorney general Rod Rosenstein refrained from acting on Trump’s direction because “doing so would constitute an improper politicization of the department”. At the same time Trump was railing against special counsel Mueller’s investigation of Trump-Russia corruption. If only Trump had an attorney general and DoJ that would have his back:

“…Whitaker was simultaneously counseling the White House on how the president and his aides might successfully pressure Sessions and Rosenstein to give in to Trump’s demands. …presented himself as a vigorous supporter of Trump’s position and “committed to extract as much as he could from the Justice Department on the president’s behalf.””

With one appointment, Trump may get both birds with one stone. Will two of his wishes come true?

Now, however, with Whitaker as acting attorney general, and the future of the Mueller investigation in jeopardy, it will be up to him to make the final decision on whether a special prosecutor will investigate Hillary Clinton.

THAT is why Whitaker is there. But how did he get there? The Washington Post traces the Whitaker’s path to the DOJ: Conservative Nonprofit With Obscure Roots & Undisclosed Funders Paid Matthew Whitaker $1.2 Million.

Whitaker went from “a modest legal practice in Iowa that paid him $79,000 that year (2012)” to a position where over the next three years he “received more than $1.2 million as the leader of a charity that reported having no other employees, some of the best pay of his career”.

Whitaker used his position to “target Clinton” and “became a paid legal analyst on CNN”. After catching Trump’s attention – the rest is history – leading us to a moment in time where he can benefit Trump by impeding Mueller and prosecuting political opponents. To which former acting head of the DOJ’s Civil Rights Division Vanita Gupta comments:

“I don’t think anyone is under any illusions as to why Trump chose Whitaker for this position,” Gupta said. “If people don’t think we are at a constitutional red line at this point, then that, in and of itself, is troubling. The erosion of our democratic norms is profoundly disturbing.”

To remove any doubt, where better to look than Trump’s own words: Trump Says He Wouldn’t Stop Acting Attorney General From Curtailing Mueller Probe.

As The Guardian reported, for once, it looks like the Democrats are coming out swinging:  Senate Democrats File Lawsuit Against Matthew Whitaker’s Appointment.

“Three leading Democratic US senators filed a lawsuit on Monday accusing Donald Trump of illegally appointing Matthew Whitaker as acting attorney general, saying the president violated the US constitution and denied the Senate its right to approve the nomination.”

In a second tragedy of justice in a single day, Trump once again ignores his own intelligence community to side with another despot, this time it is Crown Prince Mohammed bin Salman (MBS) of Saudi Arabia: Trump Defends Saudi Arabia’s Denial About The Planning Of Khashoggi’s Death.

The United States “may never know all of the facts surrounding the murder,” Trump said, noting that both King Salman and his son, Mohammed, “vigorously deny any knowledge of the planning or execution of the murder of Mr. Khashoggi,” which Trump called a “crime.”

We’ll add two tweets that summarize the cravenness of Trump. 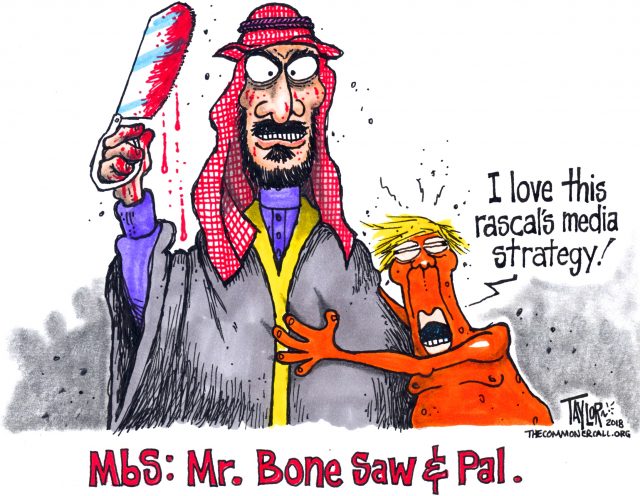 In a second insult to justice in a single day, Trump once again ignores his own intelligence community to side with another despot, this time it is Crown Prince Mohammed bin Salman (MBS) of Saudi Arabia: Trump Defends Saudi Arabia’s Denial About The Planning Of Khashoggi’s Death.

As with his mentor Vladamir Putin, Trump’s game planis to deny, deny, deny:

“The United States “may never know all of the facts surrounding the murder,” Trump said, noting that both King Salman and his son, Mohammed, “vigorously deny any knowledge of the planning or execution of the murder of Mr. Khashoggi,” which Trump called a “crime.””

FollowingFollowing @MaxBoot — All you need to know about @realDonaldTrump is that he’s tougher on Adm. Bill McRaven than he is on Crown Prince Mohammad bin Salman. Or Vladimir Putin. Or Kim Jong-un. 12:40 PM – 20 Nov 2018

Trump justifies his ‘America First’ defense by lying about a mythical $14 billion Saudi pledge to buy U.S. military equipment by mushrooming this into an imaginary $450 billion agreement. (No Trump penis as toadstool pun intended)

But it isn’t just that Trump lies in defense of Saudi Arabia and MBS, he gave them the plan for how to lie and weasel:

If Trump’s DoJ is there to do his bidding, why not — apparently — “his” State Department?

“(U.S. Secretary of State) Mike Pompeo delivered the plan in person during a meeting with Saudi King Salman and his son, Crown Prince Mohammed bin Salman, last month in Riyadh, said the source, who is familiar with Pompeo’s talks with the Saudi leaders.

“The plan includes an option to pin the Saudi journalist’s murder on an innocent member of the ruling al-Saud family in order to insulate those at the very top, the source told MEE.”

As an aside, let’s take note of how Trump IS destroying the economy. In addition to crashing the stock market he so often claimed as his bellwether of economic success, we see this: Harvesting In A Trade War: U.S. Crops Rot As Storage Costs Soar.

Here’s just one cost of Trump’s own-goal trade wars, there are no Chinese buyers for U.S. soybeans:

“…Beijing slapped a 25 percent tariff on U.S. soybeans in retaliation for duties imposed by Washington on Chinese exports. That effectively shut down U.S. soybean exports to China, worth around $12 billion last year. China typically takes around 60 percent of U.S. supplies.”

The third leg of Trump’s cynical trifecta of attacks on democracy includes: Ivanka Trump’s Email Usage Should Be Investigated.

Ivanka is apparently “the worst offender in the White House” which means her misuse of government email puts her ahead of Trump senior adviser and husband Jared Kushner and others. Since we’ll be hearing much more, we’ll leave it with this for now:

“The irony is richer than Ivanka Trump herself. The president’s daughter routinely conducted government business from her personal email in violation of federal rules, according to The Washington Post. All the while chants of “lock her up” still reverberate at President Donald Trump’s rallies, even after he made Hillary Clinton’s email use a central issue of his 2016 campaign.”

As if all of that is not enough, Trump is ending his mid-term election political stunt by slowly bringing U.S. troops back from the border with Mexico. The stunt took military personnel away from their families for Thanksgiving and cost taxpayers $210 million.