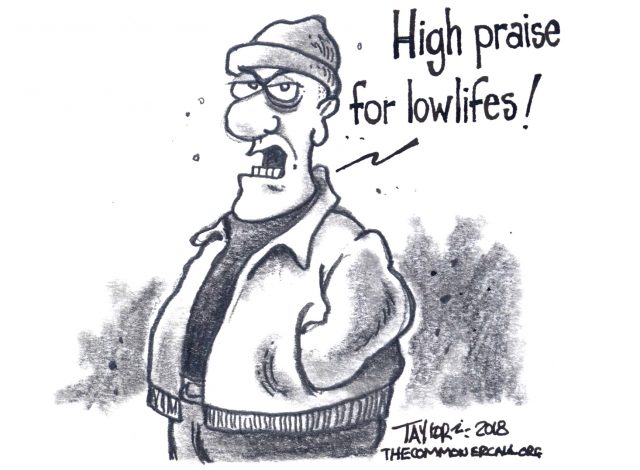 At least the timing is exquisite. Former President George W. Bush and his wife, Laura, are coming to Philadelphia on Sunday night to receive the National Constitution Center’s much-ballyhooed Liberty Medal, which is supposed to be earmarked for leaders “who have strived to secure the blessings of liberty to people around the globe.”

This Veterans Day also marks the 100th anniversary of the end of World War I — the massive and utterly pointless global conflagration that killed tens of millions and alienated an entire generation for reasons that historians are still struggling to explain a century later. The immoral similarities between “The War to End All Wars” and George W. Bush’s 2003 lie-and-propaganda-laden push to bring the “blessings of liberty” to Iraq at the tip of a Tomahawk missile are almost beyond parody.

In announcing in July that the Bushes would be receiving the same Liberty Medal that’s been draped around actual freedom fighters like Nelson Mandela, Malala Yousafzai, and Rep. John Lewis, the Constitution Center cited the couple’s work with returning soldiers through George W. Bush’s Military Service Initiative, which helps them cope with “the invisible wounds” of a disastrous war of choice that was launched by the 43rd president; his No. 2, Dick Cheney; and their posse.

Helping our veterans is a very good thing, and, yeah, it’s a better way for the ex-president to spend his retirement years than devoting every waking moment to lucrative speeches on the hedge-fund-billionaire rubber-chicken circuit. But let’s be honest: W.’s post-presidential good deeds are a kind of a mandatory community-service sentence after an administration that was essentially a criminal enterprise that caused America’s standing in the world to plummet (not for the last time, unfortunately). …

Donald Trump is bestowing the Medal of Freedom on Miriam Adelson, the wife of casino magnate and GOP mega-donor Sheldon Adelson.  We don’t really care – Elvis and Babe Ruth are getting the award posthumously too – but it raises eyebrows coming so soon after the couple invested close to $100 million in the Republicans’ midterm campaign.

That figure amounts to about 14 percent of what they reaped from the GOP’s #TaxScam in the first quarter of 2018 alone. We always tip at least 20 percent, and nobody ever gave us a medal for it.