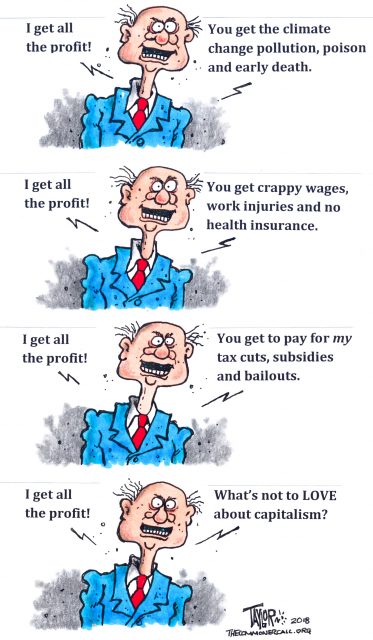 “One of the first things we must get rid of is the idea that democracy is tantamount to capitalism.”

Never underestimate the disingenuousness of top U.S.-American politicos.   They truly have no shame.

Notice how little the fascistic president Donald Trump has to say any more about the big bad Central American Caravan that was supposedly menacing the United States with a great criminal “invasion”?

The U.S. military “heroes” sent down at great taxpayer expense to “defend our border” will be missing Thanksgiving with their families thanks to this fake threat to “national security.”

Gee, what happened? It was all a dog-wagging, white-nationalist ruse!

The bogus peril was transparently concocted by the neo-Know Nothing president to rally his “blood and soil” electoral base for the midterm elections.

That’s standard, crudely duplicitous procedure for the pathological liar Trump, who has spent years casting doubt on the reality of global warming (a “Chinese hoax”) even as he has built walls to protect his golf courses from rising seas resulting from the climate crisis he has acted as president to exacerbate.

“My administration is the only thing between you and the pitchforks,” Obama said. “You guys have an acute public relations problem that’s turning into a political problem. And I want to help…I’m not here to go after you. I’m protecting you…I’m going to shield you from congressional and public anger.”

The malicious racist family-separator and Arpaio-pardoner Trump is so used to falsifying fact and canceling reality that he may not even have known he was doing it when he called his and fellow Republicans’ arch-plutocratic, deficit-boosting tax reduction for the wealthy few a “middle-class tax cut” that was going to “cost me a fortune.”

How did he come up the other day with the bit about the people who don disguises to vote multiple times.

“To Tend to This Garden of Democracy”

How did Obama keep a straight face when he invoked the retrospective specter of Weimar Germany and Nazism while saying this to the Chicago Economic Club last December?

“You have to tend to this garden of democracy, otherwise things can fall apart fairly quickly…we’ve seen societies where that happens…Now, presume there was a ballroom here in Vienna in the late 1920s or ’30s that looked and seemed as if it, filled with the music and art and literature that was emerging, would continue into perpetuity. And then 60 million people died. An entire world was plunged into chaos…So you got to pay attention — and vote.”

Set to profit from Trump’s tax windfall, the corporate burghers atop the Chicago Economic Club always pay attention and poison “this garden of democracy” with big plutocratic campaign contributions and numerous other methods for translating wealth into political and policy influence (election funding is just the tip of the iceberg in that regard).

“Tend to this garden of democracy”?  As if that was what Obama did during his eight years in the White House?  Seriously?

Beneath expertly crafted fake-progressive imagery and branding, Obama rose to power in Washington with remarkable, record-setting financial backing from Wall Street and K Street election investors. Cultivating the gardens of popular self-rule was not the mission behind their investment, as Obama knew. “It’s not always clear what Obama’s financial backers want,” the progressive journalist Ken Silverstein noted in a Harpers’ magazine report titled “Obama, Inc.” in the fall of 2006, “but it seems safe to conclude that his campaign contributors are not interested merely in clean government and political reform…On condition of anonymity,” Silverstein added, “one Washington lobbyist I spoke with was willing to point out the obvious: that big donors would not be helping out Obama if they didn’t see him as a ‘player.’ The lobbyist added: ‘What’s the dollar value of a starry-eyed idealist?’”

“The idea that each corporation can be a feudal monarchy and yet behave in its corporate action like a democratic citizen concerned for the world we live in is one of the great absurdities of our time.”

The news of the lucky winners—New York and Virginia—exposes the bad faith of Amazon’s much-hyped search.

Over the past year, mayors and governors nationwide have fallen over themselves to offer cash bribes to Amazon to court its second headquarters, billed as a “full equal” to its Seattle home base. Two hundred and thirty-eight cities submitted bids to attract HQ2, as it was quaintly known, stuffed with billions of dollars in government subsidies and detailed plans for how to accommodate Amazon employees’ housing and transportation needs. Some of these bids were borderline absurd: Chicago offered Amazon the income tax receipts from its own staff.

Practically every other multinational corporation in the world opens branch offices in other cities without fanfare. Google’s offices in Berlin, London and New York are not considered second or third headquarters – they’re just regional offices. …

As we try to grasp the reasoning behind cuts to life-saving programs while billion-dollar incomes and trillion-dollar profits are being made, we must understand that extreme wealth deadens parts of the brain. Empathy and honesty go first. Then rationality, as evidenced by some of the outlandish excuses given by the very rich for their abuses. …