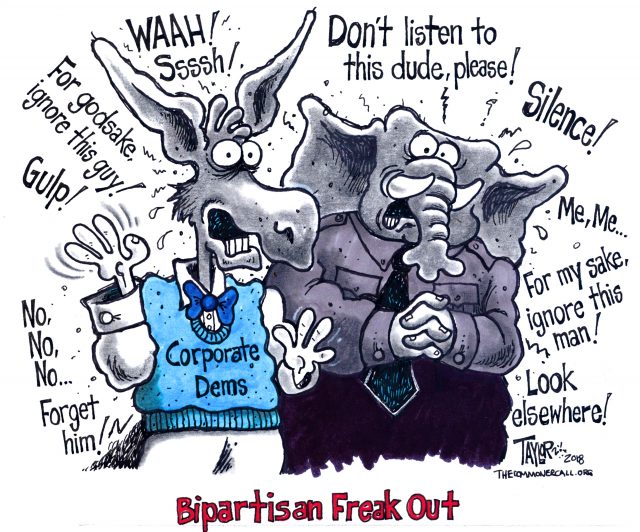 “The filthy rich convinced the dirt poor [that] the filthy rich are the ones who care. We need someone in Washington, D.C., who’s going to be a voice for these people.”

RICHARD OJEDA IS running for president. Ojeda, a West Virginia state senator and retired U.S. Army major, lost his congressional bid in the state’s 3rd District on Tuesday, but saw the largest swing of Trump voters toward Democrats in any district around the country — overperforming 2016 by more than 35 points. Still, in a district that Donald Trump carried by 49 points, Ojeda, who rose to prominence because of his support for a teachers strike in West Virginia, lost by 12 points.

Ojeda’s case for his candidacy is straightforward: The Democratic Party has gotten away from its roots, and he has a unique ability to win over a white, black, and brown working-class coalition by arguing from a place of authority that Trump is a populist fraud. He’s launching his campaign with an anti-corruption focus that draws a contrast with Trump’s inability to “drain the swamp.”

His authority — and one of his greatest liabilities — would come, in part, from his own previous support of Trump in the 2016 general election. After backing Sen. Bernie Sanders in the primary, Ojeda refused to support Hillary Clinton, seeing her as an embodiment of the party’s drift toward the elite.

“I think the biggest challenge for Richard is whether or not people actually want real change. Whether they actually want a nation. Or if they’d prefer to just keep their tribes and their grievances.”

Ojeda turned on Trump early in his term, concluding that the president’s interest in improving the lives of working people like those Ojeda grew up with in West Virginia, or served with in the military, was fake. Now, he wants to break the spell Trump still holds on half the country.

As a state senator, Ojeda led a push to legalize medical marijuana and played a central role in this year’s teacher walkouts that resulted in a rare pay increase for educators. In his congressional race, he ran on a thoroughly pro-labor, progressive platform, despite the partisan lean of the district, framing issues as pitting people against corrupt, out-of-touch elites. He focused heavily on the role of Big Pharma in sparking the opioid epidemic.

His energetic campaign style and pull-no-punches approach made him the focus of national attention during his congressional run. His announcement that he will run for president, which is first being reported by The Intercept, makes him one of the first Democrats to formally declare their intentions for 2020. …

(Commoner Call cartoon by Mark L. Taylor, 2018. Open source and free for non-derivative use and link to www.thecommonercall.org )

The Young Turks had a good segment on Richard Ojeda’s candidacy for president. Does he have a chance? Who the hell knows, but as host Cenk Uygur lays it out, Ojeda could have a real impact on the campaign. For example, listen to Cenk describe the modest proposal Ojeda has regrading the personal finances of anyone honored to serve — serve, not gorge — in the United States congress. How many low paid voters who have to routinely choose between groceries and rent won’t resonate to Ojeda’s reasonable proposal?

Imagine how veteran Richard Ojeda would have represented the United States at the recent Armistice Day commemorations in Paris, in contrast to Trump’s disgraceful petulant pout.

Oh, I love this development. The potential to shake up and really make clear the corruption of BOTH parties is real and could expose the cancerous weasels in the swamp. Run ’em, ragged Mr. Ojeda! — Mark L. Taylor, Editor 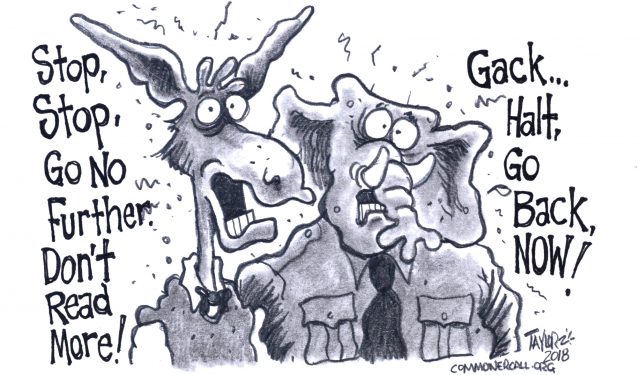 We ask our men and women in uniform to put their lives on the line.  Many make the ultimate sacrifice.  They do so for modest salaries and no chance at great wealth, out of love of country.  But our elected representatives and our president, they get rich feeding at the trough of public service. Year after year congressmen making $175,000 per year suddenly are worth millions of dollars.  And when they leave public service, then the cashing in really begins.  Most of them have no idea what it’s like to try to put food on the table or tell their kids that they can’t afford college.  They don’t use the same healthcare as us, they send their kids to private schools, they have their own security.

It’s time for us to ask of our legislators and our president to make a fraction of the sacrifices our troops do.  Live modestly while serving your country and live on a modest pension thereafter.  It’s not too much to ask when our country hangs in the balance.  This ensures not just that our representatives won’t be bought and paid for, but that they will have some understanding of the life of the working class citizen.  We will all be amazed how our healthcare improves when our representatives have to use the same health care that the working class citizen or returning veteran uses.

1.) Anyone who is elected to Federal public office, or is appointed to the Cabinet, must sacrifice any net worth over a million dollars to charity of their choice (a real charity, not some family foundation run by their kids).

3.) Elected officials will have the same healthcare package options as everyday Americans.

We’re tired of millionaires making decisions that impact our families but do not impact their own. Whether it be public schools, healthcare, housing, or banking, elected officials must be held accountable by ensuring their own decisions will impact their families as well.