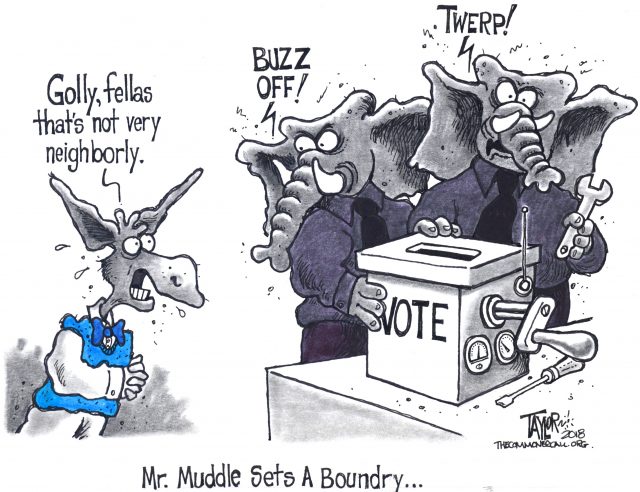 “The GOP’s long game of gerrymandering districts and using the courts to undermine easy access to voting will continue to come into play as their message shrinks to its bigoted and maniacal base.”

Rick Perlstein, historian and author of The Invisible Bridge: The Fall of Nixon and the Rise of Reagan

The reporting of the election returns coming on Tuesday was surreally and tragically incomplete. We hung on every word in down-to-the-wire races. In Florida, the governor and Senate races were supposedly decided by something like 51,000 votes and 20,000 votes out about eight million cast. In Georgia, Stacey Abrams is asking for a recount after coming 1.6 percentage points short.

Did you hear a single word on TV late last night, however, about the black precincts in Georgia where officials didn’t supply power cords for the voting machines? The batteries died, and people had to wait for hours to vote.

Twelve years ago, I wrote: “From now on there should be no excuse: anticipating such inevitabilities has to be made an active part of Democratic strategizing.” Start now, because we sure as hell didn’t start then.

You and I know that the guy running the election in Georgia, Brian Kemp, was also the Republican running for governor in Georgia. Not including an ongoing tabulation of how many votes were being suppressed along with how many were cast is derelict.

So what is the lesson for progressives? The same one I proposed back in 2006, when it was already apparent that the Republican’s long-term strategy was holding control of government whether they had a majority of the voters or not. That year, among the cheating tactics were voters being deluged with fake robocalls, homeless men hired to distribute flyers intended to trick black voters into thinking the Republican candidate was actually the Democrat, a campaign office sabotaged by a skunk, and calls placed from the “Virginia Elections Commission” alerting recipients “you will not be allowed to cast your vote on Tuesday. If you do show up, you will be charged criminally.”

Twelve years ago, I wrote: “From now on there should be no excuse: anticipating such inevitabilities has to be made an active part of Democratic strategizing.” Start now, because we sure as hell didn’t start then.

Bill Fletcher Jr., racial justice, labor and international activist and author of They’re Bankrupting Us! And 20 Other Myths About Unions & Solidarity Divided

There are five key takeaways from Tuesday’s results:

1: The Republicans have consolidated as President Trump’s party and they are not splitting off. Progressives should not expect any great schisms.

2: Voter suppression is alive and well and appears to have played out in Texas, Georgia and Florida, along with several other states. The active voter suppression was accompanied by racist and xenophobic propaganda at a new scale.

3: Despite the predictable losses in the Senate, Democrats actually did very well, making gains among the poor, women and suburban voters. And many of the newly elected officials seem to illustrate a transitioning Democratic Party.

4: Progressives will need to build independent political organizations that function inside and outside of the Democratic Party in order to sustain the momentum gained from this election and the movement organizing that made it possible.

5: Neofascists are no longer hiding their colors and have used the Trump movement as their “united front” within which they operate and where they seek a certain type of legitimacy. We on the Left must respond with a broad front against right-wing populism that both offers a political and economic alternative while not shying away from directly addressing racism, sexism, religious intolerance and xenophobia.

Keeanga-Yahmatta Taylor, assistant professor of African-American Studies at Princeton University, and the author of From #BlackLivesMatter to Black Liberation

The electoral victories that broke the Republican hold on the House of Representative have pierced the perceptions of Trumpism as all powerful and impenetrable. This includes all kinds of progressive referenda, left candidates in state races, and most dramatically, the restoration of voting rights for (most of) the formerly incarcerated in Florida. There were significant victories in the Midwest, where Trump secured his electoral outcome in 2016. These are important repudiations of the white supremacy emanating for the White House. It was also a confirmation of the audience that exists for actual Left politics, not watered down centrism.

Conservative and centrist Democrats found that voters won’t waste their time with cheap knockoffs. The only chance we have to bury the Trump nightmare is a radical political agenda that provides an actual and real alternative to the status quo.

The progressive current within the Democratic Party did not just run against Trump—they ran on Medicare for All, abolition of ICE and other political issues seen as progressive and not just maintenance of the status quo.

Where these politics failed to win, most spectacularly in Florida with Andrew Gillum and possibly with Stacey Abrams in Georgia, the naked racism, voter intimidation, voter suppression and outright theft should not be underestimated. The GOP’s long game of gerrymandering districts and using the courts to undermine easy access to voting will continue to come into play as their message shrinks to its bigoted and maniacal base.

The other truth coming out of the elections is that the need for struggle and organizing remain as important as they have ever been. In the effort to generate the mobilization of voters, that unfortunate narrative reducing nearly all of Black struggle and politics to voting was revived. Of course, securing the right to vote had been a central part of Black political movements since emancipation, but even activists and organizers within the Civil Rights Movement, understood their struggle to be about so much more.

To put it sharply, voting is not enough when the first words from Nancy Pelosi’s upon winning the House of Representatives are her intentions to “reach across the aisle” in hope of attaining “bipartisanship.” It confirms how out of touch the existing Democratic Party leadership is, how little they have learned from 2016 and that struggle remains absolutely critical to making them take the agenda of poor and working-class people in this country seriously. They will not do it on their own.

The growth of the hard right is real. The threat of fascism is real. Climate collapse is real. These all require a qualitative transformation in our political expectations and demands. We have to think big; we have to organize bigger. It requires more than getting out the vote. Now the hard work continues.

Read The Rest: 8 Thinkers On The Left Explain What The Midterm Results Mean For Progressives