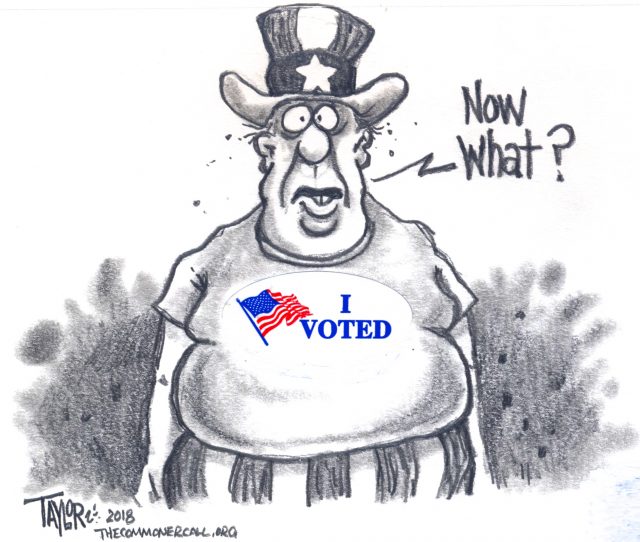 While there was a Democratic “blue wave”, it was modest, in line with usual midterm shifts, particularly when one party is in charge of all the branches of government. Trump will celebrate this as a victory, which is not without merit.

Many people have dubbed the midterm elections a referendum on Donald Trump. The president himself agreed, having toured the country extensively, crowding out rational messages by Republican candidates about the booming economy with a emotional message of nativism. Trump made the elections about him and his openly far-right agenda. That left little space for non-Trumpian, let alone anti-Trumpian, Republicans.

While the Democratic party emphasized economic issues, and particularly healthcare, they were happy to make the midterms a referendum on Trump and his nativism. They emphasized their support for a diverse America both through their candidates and discourse. The implicit slogan was: Trump does not define America.

The fact that the Republicans held up pretty well during the midterms even though Trump himself was not on the ballot will give them hope for the 2020 presidential elections.

The midterms turned out to indeed be a referendum on Trump and “Trumpism”, ie a populist radical right combination of authoritarianism, nativism and populism. It was fully embraced by the Republican party and fully rejected by the Democratic party. The key result of the midterms is that America is now both more nativist and more multicultural.

True, some of the most strident white nationalist and white supremacist Republicans were defeated – although an open neo-Nazi like Arthur Jones still got over 25% of the vote in the third congressional district of Illinois, while openly white nationalist and pro-Confederate Corey Stewart lost the Virginia senate race with virtually the same score as his conservative predecessor six years ago. Perhaps most painful for Trump was that Kris Kobach, a key player in his ill-fated and ill-named Presidential Advisory Commission on Electoral Integrity who has a decade-long history of racial voter suppression, was handsomely defeated in the Kansas gubernatorial race.

But many other far-right Republicans were re-elected, including Louie Gohmert, Steve King and Ted Cruz in Texas, while old-school Republicanswere replaced by more brazenly Trumpian ones – as, for example, Katie Arrington in South Carolina (House of Representatives), Brian Kemp in Georgia (governor), and Ron DeSantis in Florida (governor).

On the other side of the political spectrum, the Democratic party made modest overall advances, in terms of seats rather than votes – barely taking the House, while staying well behind a US Senate majority. …

It ain’t over… The NPR’s website headline buried the lede and misrepresents conservative critic Max Boot’s warning that the midterms have confirmed the GOP is now a white nationalist party. That’s fascism, folks.

Being anti-Trump is not good enough for defeating Trump. The Democratic Party needs a clearer and more progressive platform if it hopes to halt the country’s rightward movement, says Empire Files’ Abby Martin on the TRNN midterm election panel.

Midterm Mixed Bag: Democratic Control Of The House Is Trouble For Trump, But…

There are a lot of different ways to read the results from elections across the country Tuesday.

There will be lots of spin in the coming days about what it all means, but here are seven ways to cut through the noise and put what happened in context:

1. It was a Democratic wave in the House, and that is a very big deal.

This stands head and shoulders above anything else you’ll read about the 2018 midterm elections — and maybe the only thing that matters. Come January, Democrats will be in charge of the House once again. They stand to pick up between 24 and 32 seats when all the races that are too close to call are finally decided. Democrats needed a net gain of 23 seats to take control of the House. Make no mistake: That is a wave.

Just how big a deal is recapturing the House for Democrats? Imagine a scenario in which Republicans maintained control of the House. President Trump and Republicans would consider themselves validated and step on the gas, likely repealing the Affordable Care Act, rolling back more regulations and seeking any other number of policy priorities that Democrats would find odious.

Now all of that is stopped in its tracks. For Democrats — feeling a degree of disappointment at losing some closely watched governors’ races and suffering a net loss of at least a couple of seats in the Senate — taking back the House is a major victory. It’s the equivalent of a court-ordered injunction keeping the steamroller at the property line.

2. A lot of centrist Democrats will be headed to Congress. That presents an opportunity and a challenge for Democrats.

In order to secure that victory and retake control of the House, however, it took a lot of wins in center- to center-right congressional districts. That can be an opportunity for Democrats to own the middle after an election in which the president did little to win over independents. It’s also a challenge in that a new Democratic speaker of the House — presumably Nancy Pelosi, who spoke for the party Tuesday night — will have to try to unify a caucus that will have new centrists as well as a restive progressive base looking to exact revenge on Trump as the 2020 presidential campaign begins to ramp up.

3. The power of Trump was clear in Senate races.

Despite the results in the House, there was a very different message in the Senate.  …

Deep in the darkest recesses of Donald Trump’s very, very large brain, there is now a nagging feeling that gnaws at his braggadocious narcissism. His own supporters are just not that into him any more.

Not all of them have abandoned him, for sure. The angry old men are still there, screaming their insults at immigrants, the media and anyone else who isn’t an angry old man.

But all those white women – the people he called a majority of women (because the rest of them don’t count to him) – they just ran for the doors that say Trexit.

The exit polls gave Democrats a massive 21-point advantage among women, while Republicans scored just a two-point lead among men. White women split 50-48 for the anti-Trump movement known as Democrats. The only age group that Republicans won were 65 and older – and that was only by one point.

Just two years ago, in those same exit polls, white women gave Trump a nine-point lead over the first woman to hold a major party’s presidential nomination. Married women were pretty divided in 2016, but leaned heavily towards Democrats on Tuesday.

The 2018 election was a story of suburban white female flight away from Trump, shifting a Texas statewide race into nail-biting territory for the first time in more than two decades. You don’t need to be a political consultant to know what a competitive Texas means for the presidential contest that begins almost immediately.

To be sure, this is the point where sensible pundits say that midterms are different from presidential cycles. …