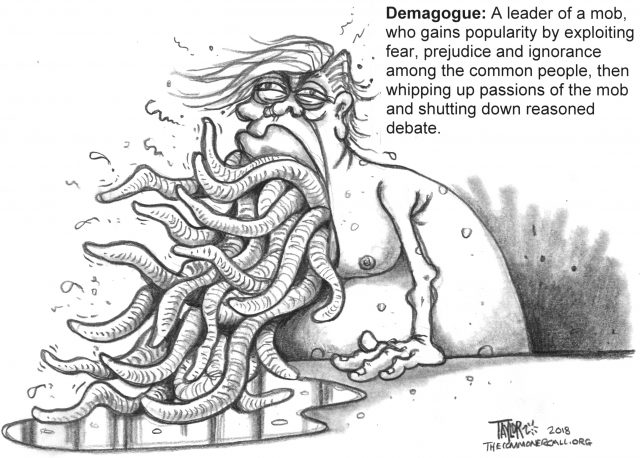 President Donald Trump’s closing argument for the 2018 midterm elections represents a dangerous escalation of demagogic rhetoric. If it works, things are only going to get worse.

During his presidential campaign, Trump shocked the media and half of the country by declaring Mexicans rapists and outlining an isolationist vision for America. He also covertly sent an “us versus them” message cloaked in the rhetoric of jobs and the economy.

“It used to be the cars were made in Flint and you couldn’t drink the water in Mexico. Now the cars are made in Mexico and you can’t drink the damn water in Flint. What the hell!” Trump yelled at the crowd during his final rally in the early morning hours of Election Day 2016.

His supporters see exactly what they want to see. They don’t support him in spite of his behavior. They support him because of it.

It was a promise to his white supporters that he would put them ahead of other groups, like racial and religious minorities and immigrants — the very definition of demagogic politics.

This year, Trump doesn’t bother with fig leaves. He smears minority groups, particularly immigrants, with impunity. This week alone, he made comments, sent tweets, and unveiled policies (some real and some fake) all designed to further dehumanize and demonize his scapegoats.

It looked erratic or even desperate, an irrational response to the reality that Republicans continue to trail in the generic ballot days before the election. It might be desperate, but it’s not irrational. Trump has a good reason to act as he has. It’s his most effective political strategy. And it’s a strategy that demagogues know has to keep ratcheting up to work. And if he’s not stopped now, he’ll only get worse.

“Every demagogue acts voluntarily and through choices. They are not how they are painted; they are not creatures of their own appetite, irrational and out of control,” said Michael Signer, a professor at the University of Virginia who has written extensively on demagogues.

“They tend to be extremely opportunistic and shameless and ruthless political actors.”

Trump’s nonplussed response to recent episodes of violence baffled the media, from the murder of a Washington Post reporter in Turkey to a spate of politically motivated mail bombings to a rampage at a synagogue. The press desperately hoped to hear him apologize. His supporters didn’t. …

(Commoner Call carton by Mark L. Taylor, 2018. Open source and free for no-derivative use with link to www.thcommonercall.org )