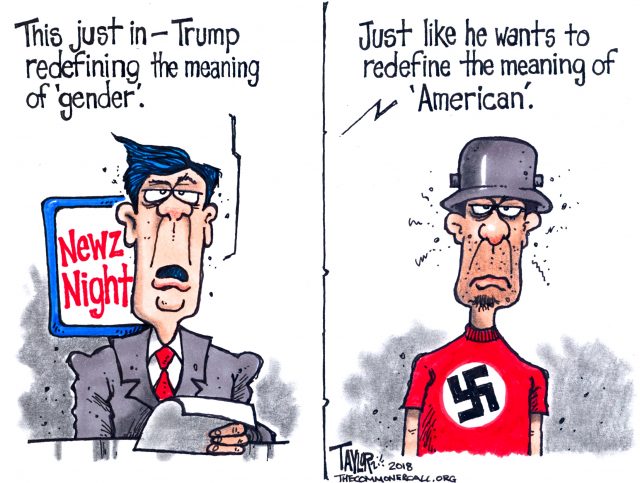 Attacking transgender people – especially transgender women – has become a favorite strategy for authoritarians, and Trump is no exception. On Sunday, the New York Times reported that the Trump administration is attempting to narrow gender identity to the one assigned at birth – thereby denying transgender people their place in society.

This is a deliberate attempt to deploy tried and tested transphobic messaging to rile up his voter base ahead of the midterm elections. Trump wants to rally conservatives while engaging in attacking a marginalized group that it is still socially acceptable to target. Unfortunately, support and inclusion of transgender individuals even among mainstream progressives is lacking, and even some self-proclaimed feminist movements advocate for trans exclusion in ways similar to the recent Trump directives.

It is not a coincidence that with increasing pushes towards gender equality and justice across the globe, patriarchal forces are striking back violently and propelling anti-women leaders such as Brazil’s Jair Bolsonaro towards power.

The irony in this is that if we peel the onion it becomes clear that transgender people are not actually the real target of such authoritarian leaders. Though transgender people will be the ones annihilated on the frontlines, figuratively and literally, by this tactic, we form too small a minority to pose a serious threat to authoritarianism. Women’s liberation is what autocrats are attempting to quell with anti-trans measures. Strongmen have made their hostility and contempt for women clear, whether it is through promotion of rape as was done by the Filipino leader Rodrigo Duterte, or pushing a US supreme court nominee credibly accused of sexual assault while insulting his accusers, in the case of Donald Trump.

Substantial evidence exists showing that gender equality and greater participation of women in the democratic process leads to more inclusive and socially oriented forms of government. Autocrats rely heavily on the “might is right” model and perpetuation of socially constructed violent models of misogyny in order to exert power, and women’s equality and liberation challenges basic tenets of totalitarianism. …

“If the demagogue is the father of the nation, then any threat to patriarchal manhood and the traditional family undermines the fascist vision of strength. These threats include the crimes of rape and assault, as well as so-called sexual deviance. The politics of sexual anxiety is particularly effective when traditional male roles, such as that of family provider, are already under threat by economic forces.”