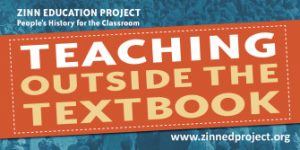 Student-selected and student-run current events discussions are a daily ingredient of my high school social studies classes. The first 20 minutes of every 90-minute class period, we read an excerpt from a recent newspaper article and discuss its significance. In the last few years, the discussions have been dominated by names that have piled up with sickening frequency: Trayvon Martin, Eric Garner, Michael Brown, Walter Scott, Freddie Gray, Tamir Rice, Sandra Bland. My students, mostly Asian American and white, live in Lake Oswego, one of the wealthiest cities in Oregon and a community that benefits from mostly positive relationships with police. They struggle to understand a society that continues to allow Black lives to die at the hands of law enforcement.

Through examining FBI documents, students learn the scope of the FBI’s COINTELPRO campaign to spy on, infiltrate, discredit, and disrupt all corners of the Black Freedom Movement.

This year, student attention has turned to how activists are responding to the racism in the criminal justice system, particularly the Black Lives Matter movement. In November 2015, a student brought in an Oregonian article, “Black Lives Matter: Oregon Justice Department Searched Social Media Hashtags.” The article detailed the department’s digital surveillance of people solely on the basis of their use of the #BlackLivesMatter hashtag. My students thoughtfully discussed and debated whether tying #BlackLivesMatter to potential threats to police (the premise of the surveillance program) was justifiable, with most students agreeing with the Urban League and the American Civil Liberties Union that the U.S. Department of Justice acted improperly and potentially unlawfully.

But what was not noted in the Oregonian article was the historical resonance of this story, which recalls the ugly, often illegal, treatment of Black activists by the U.S. justice system during an earlier era of our history.

My students had little way of knowing about this story behind the story because mainstream textbooks almost entirely ignore COINTELPRO, the FBI’s counterintelligence program of the 1960s and ’70s that targeted a wide range of activists, including the Black freedom movement.

COINTELPRO offers me, as a teacher of classes on government, a treasure trove of opportunities to illustrate key concepts, including the rule of law, civil liberties, social protest, and due process, yet it is completely absent from my school’s government book, Magruder’s American Government (Pearson).