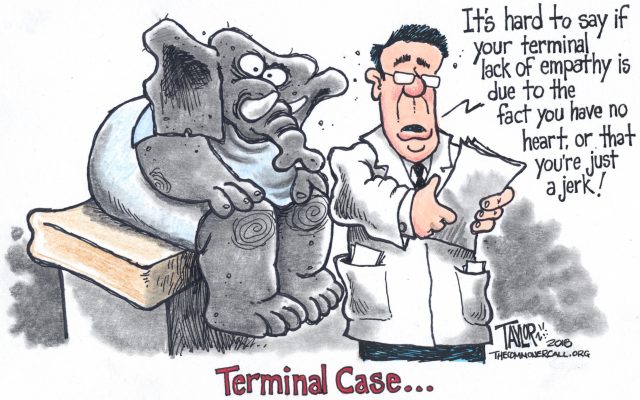 When all else fails, Republicans resort to playing the victim because that’s the one thing that binds all conservatives—the deep conviction that they’re always being picked on. Watch it play out in this tearful video from Rep. Lou Barletta (R-PA) who’s upset that the man he’s challenging for Senate, Sen. Bob Casey (D-PA), is running an ad reminding voters that Barletta wants to take their health care away.

Barletta has a grandson with cancer, which is a horrible thing to have to go through—something millions of families know from awful experience. Like Stacie Ritter of Manheim in Lancaster County, who Casey has known for years and who appeared in an ad for him. Casey “has spoken about Ritter’s family for years during the debate about the Patient Protection and Affordable Care Act, also known as Obamacare, and brought her up during a Senate hearing in January 2017.” In the ad, Ritter relates the experience of having her twin daughters both stricken with cancer at the same time when they were very young. “Thank God we had health insurance,” Ritter says in the ad. “But if Lou Barletta has his way, kids like mine could be denied the care they need.”

Apparently Barletta thinks—or wants voters to think—that Casey had this ad made specifically to be mean to him, because he told Casey about his grandson and because the child is also a twin. Because now someone in his own family is horribly ill, Barletta apparently believes his voting record on healthcare should be off-limits. Because that’s how it works with Republicans—until it happens to someone they love, until it affects their own families, they don’t care.

Barletta didn’t care about anyone’s health care and certainly not their pre-existing condition coverage all the times he voted to repeal the Affordable Care Act—every time it came up in the House. He voted for every bullshit “replacement” plan from Republicans that would, indeed, allow health insurers to deny coverage to people with pre-existing conditions or make it completely unaffordable.

That’s the reality, unfortunate as it is for Barletta and every Republican running for office right now—they’ve all voted, again and again and again, to take people’s health insurance away. And until someone they personally care about got sick, they simply didn’t care.

Provoking immediate warnings about what is now in store for the most vulnerable people in the United States, President Donald Trump on Monday reportedly tapped Maine’s former health commissioner Mary Mayhew—who was instrumental in Republican Gov. Paul LePage’s efforts to block Medicaid expansion in the state—to run the program at the federal level.

Critics such as Zak Ringelstein, a Democratic U.S. Senate candidate from Maine, rapidly denounced her appointment as “horrifying.”

“This is horrible news,” responded Maine-based Dr. Cathleen London. “She destroyed Medicaid in Maine now she will destroy it in the whole country.”

Healthcare policy expert Andy Slavitt—who ran the Centers for Medicare and Medicaid Services (CMS) under the Obama administration—declared: “The Medicaid director from the state that refused to implement Medicaid expansion is now apparently to run the Medicaid program nationally under Trump.”

Former Maine state Rep. Diane Russell, a Democrat, expressed her alarm in a series of tweets.

“Make no mistake, she was hired for her cruelty with the express purpose to dismember Medicaid,” Russell charged, referencing a 2017 Portland Press Herald column that detailed the findings of a federal audit that showed gross failures while Mayhew was the state’s top health official responsible for administrating MaineCare, the state’s version of the program.

Both Russell and Mayhew launched unsuccessful campaigns to replace term-limited LePage, who will leave office in November. Prior to her campaign, Mayhew was Maine’s health commissioner for seven years. As the Press Herald reported Monday:

“She was LePage’s most high-profile cabinet member for most of that time, overseeing major changes to Maine’s public assistance programs, including MaineCare, its version of Medicaid.

“Mayhew, like LePage, was an ardent opponent of expanding Medicaid, which was made allowable at the state level under the Affordable Care Act. Maine voters approved expansion through referendum but that expansion still hasn’t been funded and has been mired in legal challenges by LePage.”

The ACLU of Maine turned to Twitter on Monday to highlight a blog post from last year that outlined how “Mayhew has staked her career on reducing the number of Mainers who can access MaineCare.” The group points out that “under her stewardship, the state has reduced MaineCare’s enrollment by 37 percent, taking health insurance away from approximately 80,000 poor Mainers.”

While Mainers continue to fight for Medicaid expansion on the state level—because LePage has refused to expand the program despite legislation, a ballot measure, and court orders demanding he do so—Mayhew will serve as deputy administrator and director of Medicaid and the Children’s Health Insurance Program (CHIP) under Trump-appointed CMS Administrator Seema Verma.

Verma, for her part, has been key to the Trump administration’s efforts to dismantle social safety net programs that aim to help the nation’s most vulnerable citizens. Under her leadership, CMS in January issued new guidance enabling states to impose work requirements on Medicaid recipients—a move that healthcare experts denounced as a “truly savage” effort to “stigmatize the poor.”

While Republicans in Congress try to force through work requirements for food stamps on a federal level—despite warning from experts about the consequences of doing so—some GOP-controlled states such as Arkansas already have implemented such restrictions for healthcare. Arkansas revealed on Monday that this month more than 4,000 people have been kicked off the state’s Medicaid program under its new rules, bringing the total to more than 8,500 across two months.

Other states, meanwhile, are working to expand Medicaid—an objective that is bolstered by an analysis put out on Monday by the nonpartisan Office of Government Accountability. The office found that nearly 20 percent of low-income people in states that did not expand Medicaid did not seek necessary medical care because they couldn’t afford it, compared with 9.4 percent of people in states that expanded the program.