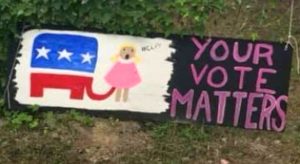 AUSTIN — Marion Stanford expected the political sign she painted to rile up some folks in her small town of Hamilton in Central Texas.

But she didn’t expect to end up in a heated Facebook exchange with Texas Agriculture Commissioner Sid Miller, or for the police to show up to confiscate her sign.

The sign features the GOP elephant logo with its trunk up the dress of a female figure, with the word “Help,” next to the phrase “Your vote matters.” Behind it in her yard were campaign signs for Democratic candidates Lupe Valdez, Beto O’Rourke, Julie Oliver and Miller’s challenger, Kim Olson.

“Here we have a political party that is using women,” Stanford said. “I thought the sign represented what is going on now, and we can’t just stand quiet. I wanted to tell people we could stop it with voting.”

“Police told me to remove the sign or they would take it and would arrest me,” Stanford said. “So I let them take the sign.”

Miller, who is notorious for sharing controversial posts to his nearly 800,000 followers, shared a photo of Stanford’s sign with the caption: “This is in Hamilton, Texas and is supposed to be Judge Kavanaugh’s young daughter. Notice my opponent’s sign in the background. The Democrat sleaze knows NO bounds!”

Stanford said she painted the sign last week after watching Supreme Court nominee Brett Kavanaugh testify about the sexual assault allegations against him.

“That was not Judge Kavanaugh’s daughter,” she said. “The cartoon was made last year by Washington Post cartoonist Ann Telnaes, a Pulitzer Prize winner.”

Telnaes is known for her cartoons and opinion pieces that take aim at President Donald Trump and other Republicans.

Miller’s post attracted thousands of reactions, with some Facebook users calling Stanford a pedophile and saying that her sign was pornogaphy and that she should be arrested. …