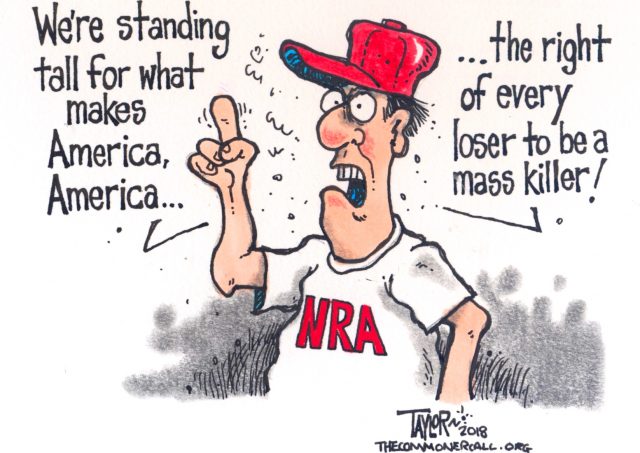 When a gunman perched in a Las Vegas hotel room used rifles affixed with bump stocks to commit the deadliest mass shooting in American history, Slide Fire Solutions went from an obscure Texas manufacturer of a gun world novelty to the main purveyor of a notorious and widely condemned product. As federal and state lawmakers of both parties called to ban bump stocks, and attorneys filed lawsuits, Slide Fire announced in April that it was shutting down.

But on the one-year anniversary of the massacre at the Route 91 Harvest Festival, bump stocks remain not only legal under federal law but unregulated by the Bureau of Alcohol, Tobacco, and Firearms, despite a proposed clamp down by the Trump administration. And Slide Fire’s wares remain readily available. RW Arms, a Fort Worth dealer that appears to have close ties to Slide Fire, is selling its remaining inventory, including bump stocks, magazines, and triggers.

“It is grossly irresponsible for any company to be marketing these devices to enable virtually anyone to obtain and use a machine gun. It poses a grave danger to public safety. That was obvious from the get-go with these bump stocks, but after Las Vegas it is completely undeniable.”

So long as the government continues to classify bump stocks as accessories, RW does not need a federal firearms dealer license to sell them. But RW is also advertising several bump-stock equipped AR-15s that look identical to ones once offered by Slide Fire. RW needs a license to sell the rifles, and according to the ATF, it does not have one. On Thursday, an ATF spokesperson said that The Trace’s questions about RW Arms had prompted a referral to its enforcement division.

A bump stock is a foot-long piece of plastic capable of transforming a semiautomatic rifle into a weapon functionally indistinguishable from a machine gun. That means a gun fitted with a bump stock can fire up to 800 rounds per minute.

After Route 91, not even the National Rifle Association defended the products. The Department of Justice announced it would consider designating bump stocks as machine guns, releasing the proposed rule in March. However, the rule change — which would effectively outlaw civilian ownership of the devices — has not yet been implemented. As a result, unregulated bump stock sales remain legal.

A search of Texas’ taxable entities database shows that RW Arms is registered to an unassuming single-story brick house in the Bluebonnet Hills neighborhood of Fort Worth. The only registered agent of the company is a man named Mark Maxwell, and a corporation called Maxwell Brothers, which is operated by him and his brother Brian, is a part owner.

RW was chartered on April 30 of this year — less than two weeks after Slide Fire told customers it was shutting down. On July 27, Slide Fire alerted subscribers to its email list that RW was now selling its remaining inventory of bump stocks.

“It is grossly irresponsible for any company to be marketing these devices to enable virtually anyone to obtain and use a machine gun,” said Jonathan Lowy, the Vice President for Litigation at the Brady Campaign to Prevent Gun Violence, which is representing victims of the Las Vegas shooting in a class action lawsuit against Slide Fire. “It poses a grave danger to public safety. That was obvious from the get-go with these bump stocks, but after Las Vegas it is completely undeniable.”

On its website, RW advertises the Slide Fire bump stocks, as well as bump stocks made by Bump Fire Systems, a competitor that went out of business before Las Vegas, and also accessories like scopes and ammunition magazinesfrom a range of manufacturers.

RW also sells three models of bump stock-equipped AR-15 rifles. The rifles and their listings are identical to those that appear on a cached version of Slide Fire’s website, down to the item descriptions and images.

Nonetheless, RW does not appear on the ATF’s online list of licensed gun stores in Texas. It’s legal in Texas and 29 other states for private individuals to sell guns without a license, and many hobbyists and collectors do so. But federal law requires any person “engaged in the business” of selling firearms to obtain a Federal Firearms License, or FFL, from the ATF.

The criteria for establishing that someone is “engaged in the business” of selling guns are notoriously vague. But one measure used in successful prosecutions is whether the person advertises guns for sale on a regular, ongoing basis. RW has marketed the Slide Fire-equipped rifles through the website since at least August 22.

“On its face, this certainly raises questions,” said Peter Gagliardi, a former ATF official who oversaw industry regulatory activities at the New York field office. “Only an investigation will tell.”

Meredith Davis, a spokeswoman for the Dallas Field Division of the ATF, said that RW does not currently have a FFL and has not applied for one. She added that if an investigation revealed that Mark Maxwell was using his business to sell a small number of rifles from his personal collection, that would be legal — but extremely unusual.

A couple of days later, Davis told us that the matter had been referred to the bureau’s enforcement division in response to The Trace’s questions. People who regularly sell guns without such a license are at risk of felony federal prosecution.

Reached by phone, Mark Maxwell declined to comment on his company’s sale of bump stocks. He hung up when asked if he had a license to sell firearms. He did not respond to subsequent calls and emails seeking comment.

Maxwell maintains a limited public profile. Public records show that he was found guilty of misdemeanor assault in 1999, disturbing the peace in 2003, and driving under the influence in 2012. None of these convictions would prohibit him from owning a gun in the state of Texas or from getting a federal firearms license.

The owner of Slide Fire, Jeremiah Cottle, did not respond to requests to explain his relationship with Maxwell or RW Arms. But social media posts suggest that Maxwell may be a former employee. In 2017, Maxwell described packing up and driving a Slide Fire trailer to an event, and in early 2018, he described the company’s Moran, Texas, facility as “the office.” Maxwell also shared the April notice that Slide Fire would be shutting down. When friends asked why the company was closing its doors, Maxwell offered to explain more in private.

Three months later, Slide Fire emailed its customers to say that ever since it stopped taking orders, “the demand for bump fire stocks has been on the rise.” But now the company had “some great news!”

“If you’re still in the market for a Slide Fire® stock,” the company wrote in the July 27 message, “shop confidently and securely with RW Arms.”