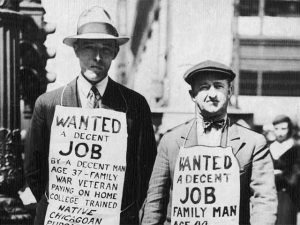 The idea of a genuine economy shorn of Wall Street contrivance touched a chord.

he mood at kitchen tables in California in the early 1930s was as bleak as it was elsewhere in the United States. Factories were closed. More than a quarter of the breadwinners in the state were out of work. There were no federal or state relief programs, nothing but some local charity—in Los Angeles County, a family of four got about 50 cents a day, and only 1 in 10 got even that.

Not long before, America had been a farming nation. When times were tough, there was still the land. But the country was becoming increasingly urban. People were dependent on this thing called “the economy” and the financial casino to which it was yoked. When the casino crashed, there was no fallback, just destitution. Except for one thing: The real economy was still there—paralyzed but still there. Farmers still were producing, more than they could sell. Fruit rotted on trees, vegetables in the fields. In January 1933, dairymen poured more than 12,000 gallons of milk into the Los Angeles city sewers every day.

The factories were there, too. Machinery was idle. Old trucks were in side lots, needing only a little repair. All that capacity, on the one hand, legions of idle men and women on the other. It was the financial casino that had failed, not the workers and machines. On street corners and around bare kitchen tables, people started to put two and two together. More precisely, they thought about new ways of putting two and two together.

In the spring of 1932, in Compton, California, an unemployed World War I veteran walked out to the farms that still ringed Los Angeles. He offered his labor in return for a sack of vegetables, and that evening he returned with more than his family needed. The next day a neighbor went out with him to the fields. Within two months 500 families were members of the Unemployed Cooperative Relief Organization.

That group became one of 45 units in an organization that served the needs of some 150,000 people.

It operated a large warehouse, a distribution center, a gas and service station, a refrigeration facility, a sewing shop, a shoe shop, even medical services, all on cooperative principles. Members were expected to work two days a week, and benefits were allocated according to need. A member with a wife and two kids got four times as much food as someone living alone. The organization was run democratically, and social support was as important as material support. Members helped one another resist evictions; sometimes they moved a family back in after a landlord had put them out. Unemployed utility workers turned on gas and electricity for families that had been cut off.

The cooperative model seems to defy what economists call “economic law”—that people work only for personal gain and in response to schemes of personal incentive and reward. …When the next crash comes, the self-help movement of the 1930s may be just as important a model as the New Deal.

Conventional histories present the Depression as a story of the corporate market, foiled by its own internal flaws, versus the federal government, either savvy mechanic or misguided klutz, depending on your view. The government ascended, in the form of the New Deal; and so was born the polarity of our politics—and the range of our economic possibilities—ever since.

Yet there was another story, too. It embodied the trusty American virtues of initiative, responsibility, and self-help, but in a way that was grounded in community and genuine economy. This other story played out all over the U.S. for a brief but suggestive moment in the early 1930s.

The UCRO was just one organization in one city. Groups like it ultimately involved more than 1.3 million people, in more than 30 states. It happened spontaneously, without experts or blueprints. Most of the participants were blue-collar workers whose formal schooling had stopped at high school. Some groups evolved a kind of money to create more flexibility in exchange. An example was the Unemployed Exchange Association, or UXA, based in Oakland, California. (The UXA story was told in an excellent article in the weekly East Bay Express in 1983, on which the following paragraphs are based.) UXA began in a Hooverville (an encampment of the poor during the Depression, so-called after the president) called “Pipe City,” near the East Bay waterfront. Hundreds of homeless people were living there in sections of large sewer pipe that were never laid because the city ran out of money. Among them was Carl Rhodehamel, a musician and engineer.

Rhodehamel and others started going door to door in Oakland, offering to do home repairs in exchange for unwanted items. They repaired these and circulated them among themselves. Soon they established a commissary and sent scouts around the city and into the surrounding farms to see what they could scavenge or exchange labor for. Within six months, they had 1,500 members and a thriving sub-economy that included a foundry and machine shop, wood shop, garage, soap factory, print shop, wood lot, ranches, and lumber mills. They rebuilt 18 trucks from scrap. At UXA’s peak, it distributed 40 tons of food a week.

It all worked on a time-credit system. Each hour worked earned a hundred points; there was no hierarchy of skills, and all work paid the same. Members could use credits to buy food and other items at the commissary—medical and dental services, haircuts, and more. A council of some 45 coordinators met regularly to solve problems and discuss opportunities.

One coordinator might report that a saw needed a new motor. Another knew of a motor, but the owner wanted a piano in return. A third member knew of a piano that was available. And on and on. It was an amalgam of enterprise and cooperation—the flexibility and hustle of the market, but without the encoded greed of the corporation or the stifling bureaucracy of the state. The economics texts don’t really have a name for it. The members called it a “reciprocal economy.”

It would seem that a movement that provided livelihood for more than 300,000 people in California alone would merit discussion in the history books. Amidst the floundering of the early 1930s, this was something that actually worked. Yet in most accounts, the self-help co-ops get barely a line.

The one exception is Upton Sinclair’s campaign for governor in 1934. Sinclair was a kind of Ralph Nader of his day. He based his campaign on a plan he called End Poverty in California, or EPIC, which was based in turn on the self-help cooperatives, UXA in particular. It would have taken the state’s idle farmland and factories and turned them into worker co-ops.

The idea of a genuine economy shorn of Wall Street contrivance touched a chord. Some 2,000 EPIC clubs sprang up. Sinclair won the Democratic primary, but California’s moneyed establishment mustered $10 million dollars to pummel him. EPIC died with his campaign, and the idea has been associated with quixotic politics ever since.

To say UXA and the other cooperative economies faced challenges is to put it mildly. They were going against the grain of an entire culture. Anti-communist “Red Squads” harassed them, while radicals complained they were too practical and not sufficiently committed to systemic change.

But the main thing that killed the co-ops was the Works Progress Administration and its cash jobs. Those WPA jobs were desperately needed. But some of them were make-work, while the co-op work was genuinely productive.

The co-ops pleaded with FDR’s Administration to include them in the WPA. Local governments were helping with gasoline and oil. But the New Dealers weren’t interested, and the co-ops melted away. For years they were period pieces, like soup lines and Okies.

Or so it seemed.

Today, the signs of financial and ecological collapse are mounting. We are strung out on foreign debt and foreign oil and riding real estate inflation that won’t last forever. Add the impending collapse of the natural life support system, and the 1930s could seem benign by comparison. …