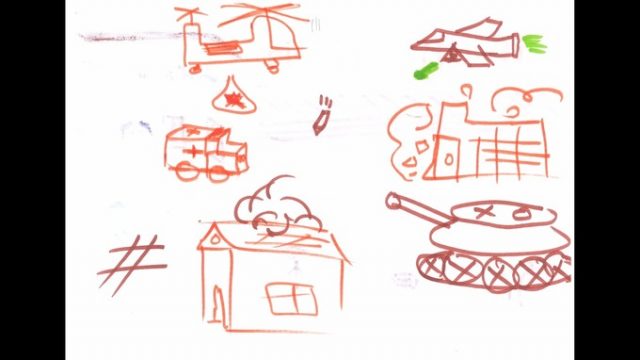 A child’s drawing of the reality of life in Syria from the book “Home: Drawings By Syrian Children”.

“In a strange way it is journalism at its best.”

In 2016, with my friend Richard Flanagan, I stopped at a transit station halfway across Serbia. It was a clear day – blue sky from horizon to frozen horizon. Three dirty black buses rolled into the makeshift rest stop and 200 Syrian people climbed down off the big final bus step in need of food and a toilet break. Anywhere else in the world, a group of people like these would be smiling tourists on their way north or south, to the snow or the desert.

Richard and I had followed this river of Syria’s people and all of them were on a journey of escape, fleeing unimaginable horror, men in black clothes, murderous men, murderous civil war and the end of their homeland. And their destination was thousands of kilometres north in a direction none had ever imagined they would travel, to a future utterly unknown. Among them were doctors and firefighters, teachers, mechanics and university students.

I noticed that day that the young men who huddled their little families around themselves were blank, their eyes full of the shock of profound loss. These men had failed their families; they had run, deserted the homeland that hundreds of their generations had built for so many thousands of years before them. Richard softly ushered these men and their wives to a quiet corner of the complex, with warm coffee and the soothing, loving attitude he shows all his fellows humans, and as they spoke he wrote; they shared stories and they cried.

To quieten the children, I caught their attention. First they were hungry; they ate. Speaking no Arabic, and without translation, I gestured to the little people around me to draw. To tell me about themselves. Grubby little boys drew rainbows and orange trees, and the girls drew princesses and yellow suns. Some lost interest quickly so we used my paper to make aeroplanes with a design my own little boy had discovered, a paper aeroplane that flew and flew, and before long six little boys ran and laughed and watched the plane briefly sweep away the trauma that must surely have travelled with them on those buses, and in their tiny backpacks, all the way from Syria.

One little girl didn’t stop drawing. She barely glanced up at the paper aeroplanes dancing in the blue sky above her. She drew and she drew. …