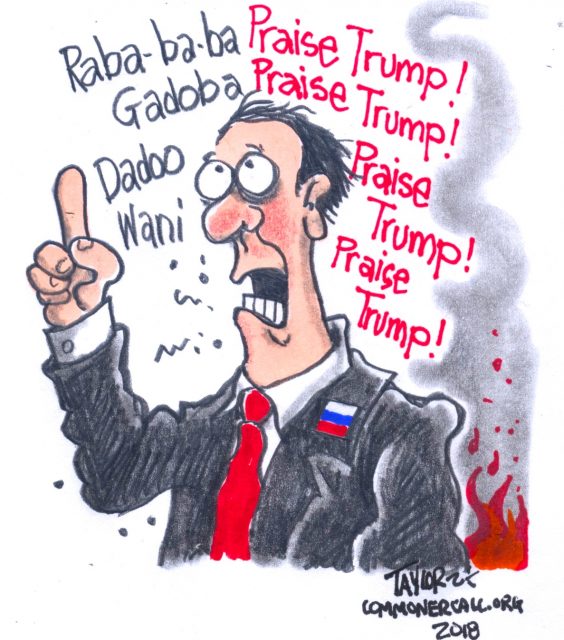 There is crazy and then there is Trump Crazy.

And then there is right down the old rabbit hole evangelical Trump Crazy.

The video below is a little mind boggling to watch but I urge you to because it gives a raw glimpse into an element of energized Trump support and delusion that is both real and an active part of what is going on in the nation.

The video is of a recent sermon by Alabama Pentecostal Pastor John Kilpatrick of the Church of His Presence, in Daphne, Alabama.  Kilpatrick leads his congregation of mostly white followers in a rousing emotional talking-in-tongues prayer for Donald Trump. Disingenuously, the Kilpatrick periodically assures that he is not being “political” (gotta’ protect that tax-free exemption of the ol’ collection plate, dontcha’ know) the pastor whips the church into a sweaty group call for God’s defense of Trump and his program.

Kilpatrick calls out to his followers, “It’s time to pray for the president.”

His sermon revolves around 2 Kings 9:22, which accuses Jezebelof witchcraft.

“I am not being political, but I don’t see how President Trump bears up under it,” Kilpatrick intoned. “He is as strong as I’ve ever seen a man be. But here’s what the Holy Spirit said to me last night and what He said for me to tell you. He said, ‘Tell the church that so far, Trump has been dealing with Ahab. But Jezebel’s fixing to step out from the shadows.’ That’s what the Lord said to me.”

Kilpatrick warns that God had told him directly that there was an evil plot to remove Trump from office.

“He said, ‘Pray for him now, because he said there’s about to be a shift, and the Deep State is about to manifest, and it’s going to be a showdown like you can’t believe. So, I’m coming to you as a prophet, as a man of God, and I’m telling you, it’s time to pray for the president.”

Everyone is on their feet and shouts echo though the room and hands are in the air. There is an electric energy running through the gathered.

Well on that I can agree with the pandering huckster preacher: the soul of the country is at risk.

(Commoner Call cartoon and column by Mark L. Taylor, 2018. Open source and free for non-derivative use with link to www.thecommonercall.org )

An Alabama pastor who went viral for claiming the United States is under the tyranny of witches admitted in a Sunday sermon that Donald Trump is an adulterer — but refuses to condemn him for it.

“If God has raised him up, and I believe that is the case, then I would say I would not touch him because [who] God has raised up, you don’t want to oppose,” the pastor said.

He went on to note that he believes allegations that Trump cheated on his wife with adult-themed models — though he mentioned neither the women nor their professions.

The pastor added that he doesn’t understand how God can use a man who has “betrayed his family,” been “married so many times” and has had so many lovers.

Christian Post reported that Rev. John Kilpatrick of Daphne, Alabama’s Church of His Presence said he cannot judge the way God decided to “raise up” the president. … 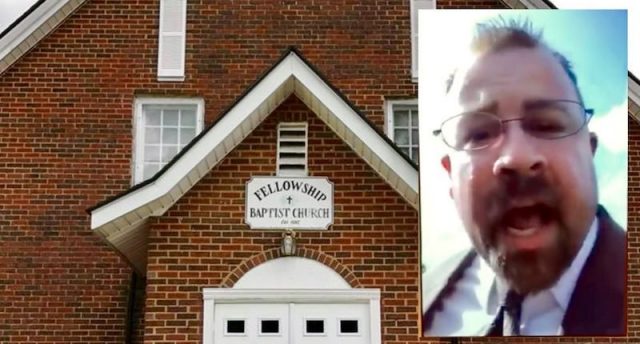 “When these children are burning in Hell, how do you think you gonna feel?”

A Kentucky Baptist preacher has faced backlash after recording a live video in which he complained about a youth football game, saying that the children were going to hell and that the cheerleaders were dressed as “prostitutes.”

It started when Pastor Ernie Spence of Fellowship Baptist Church in Kentucky passed by Trimble County High School in the Northwest corner of the Bluegrass State and saw children laughing and playing. …

Now, before you laugh, Smartypants, consider this bit of American reality…

“Presently, 42 percent of the U.S. public believes in creationism or ‘intelligent design.’ And nearly a third of the population, 94 million people consider themselves evangelical.”