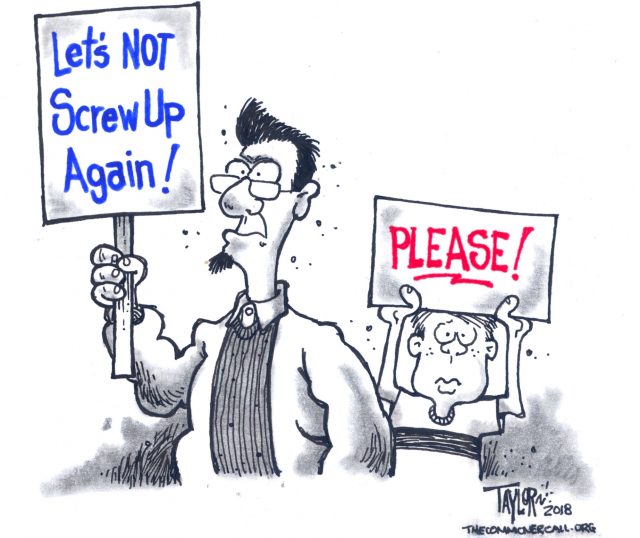 Placards are being prepared. Photo-opportunities are being organised. A list of demands is being drawn up by a coalition of pressure groups, unions and NGOs. Yes, preparations are well under way for protests to mark next month’s 10th anniversary of the collapse of Lehman Brothers – the pivotal moment in the global financial crisis.

Make no mistake, the fact that events will take place in all the world’s financial centres is no cause for celebration. On the contrary, it is a sign of failure. The banks were never broken up. Plans for a financial transactions tax are gathering dust. Politicians toyed with the idea of a green new dealand then promptly forgot about it. There never was a huge swing of the pendulum away from the prevailing orthodoxy, just a brief nudge that was quickly reversed. The brutal fact is that the left had its chance, and it blew it.

Ten years on, international finance is as powerful as it ever was. There has been only cosmetic reform of the banking industry. Corporate power is ever more concentrated. The benefits of the weakest global recovery from recession in living memory have been captured by a tiny minority. Wages and living standards for the majority in developed countries have grown only modestly, if at all.

September 2008 was a near-death experience for global capitalism. At one point there were fears for the entire western banking system; when the recession was at its worst, industrial production was collapsing more quickly than it had in the early stages of the Great Depression. It was that bad. The moment was ripe for politicians brave enough to state the obvious: that the crisis was the result of removing all the shackles on global financial capitalism put in place for good reason in the 1930s. But social democratic parties failed miserably to come up with a progressive response to the crisis that would have involved redressing the imbalance between capital and labour. They were timid when they should have been brave, and have paid a heavy price as a result. Mainstream parties patched up the system and paid scant heed to

“There was a very short period when the powers that be were on the back foot. Progressive forces were not able to take advantage. Nothing substantial has changed and we are sleep-walking into another crisis.” — David Hillman, director of Stamp Out Poverty.

the anger felt by those who felt ignored. The bitterness bubbled away and eventually found other ways of manifesting itself.In the winter of 2008-09, there was a naive assumption on the left that the shock of Lehmans was so profound that change would inevitably occur. If the oil shocks of the 1970s had been the catalyst for the seizure of control by a rightwing political agenda, then the sub-prime mortgage crisis would do the same for the left. But it wasn’t quite that simple, because those who had done well in the decades that followed the Thatcher-Reagan revolution used all their power, influence, financial clout and cunning to resist change. A few tactical retreats were made in order to safeguard the status quo.

The contrast between Franklin Roosevelt in the 1930s and Barack Obama is telling. Both men arrived in the White House in desperate times. Both had a mandate for change. Roosevelt thought reform was necessary to save capitalism from itself. It was this intellectual framework that resulted in the Glass-Steagall Act to separate banks’ investment and retail operations; public works schemes for the unemployed; and laws to make it easier for trade unions to organise. Obama, like most of his fellow centre-left politicians 10 years ago, was a technocrat who broadly accepted the status quo and never seriously contemplated taking on finance. Wall Street detested Roosevelt. It found Obama much more amenable.

Obama deserves a bit of sympathy. Every radical period requires a philosopher king to help to provide a political framework for action. For the first generation of free-market liberals, the gurus were Adam Smith and David Ricardo. For Lenin it was Karl Marx. In the 1930s, it was John Maynard Keynes. And in the 1970s it was Milton Friedmanand Friedrich Hayek. Ten years ago there was no one.

The process of challenging business-as-usual lacked a unifying analysis of what had caused the crisis. There was a green narrative, a Keynesian narrative and a Marxist narrative, all of which had merit and all of which had their adherents. The upshot, though, was that progressives all headed off in their own directions. That left the door open for a narrative that few would have expected to emerge triumphant in September 2008: that the crisis had been caused by governments spending too much.

There are plenty of lessons that need to be learned. …

10th Anniversary Of The Financial Crash That Wiped Out Millions, Preparing For The Next Crash

Ten years ago, there was panic in Washington, DC, New York City and financial centers around the world as the United States was in the midst of an economic collapse. The crash became the focus of the presidential campaign between Barack Obama and John McCain and was followed by protests that created a popular movement, which continues to this day.

Banks: Bailed Out; The People: Sold Out

On the campaign trail, in March 2008, Obama blamed mismanagement of the economy on both Democrats and Republicans for rewarding financial manipulation rather than economic productivity. He called for funds to protect homeowners from foreclosure and to stabilize local governments and urged a 21st Century regulation of the financial system. John McCain opposed federal intervention, saying the country should not bail out banks or homeowners who knowingly took financial risks.

By September 2008, McCain and Obama met with President George W. Bush and together they called for a $700 billion bailout of the banks, not the people. Obama and McCain issued a joint statement that called the bank bailout plan “flawed,” but said, “the effort to protect the American economy must not fail.” Obama expressed “outrage” at the “crisis,” which was “a direct result of the greed and irresponsibility that has dominated Washington and Wall Street for years.”

By October 2008, the Troubled Asset Relief Program (TARP), or bank bailout, had recapitalized the banks, the Treasury had stabilized money market mutual funds and the FDIC had guaranteed the bank debts. The Federal Reserve began flowing money to banks, which would ultimately total almost twice the $16 trillion claimed in a federal audit. Researchers at the University of Missouri found that the Federal Reserve gave over $29 trillion to the banks.

This did not stop the loss of nine million jobs, more than four million foreclosures and the deep reduction in wealth among the poor, working and middle classes. A complete banking collapse was averted, but a deep recession for most people was not.

The New Yorker described the 2008 crash as years in the making, writing:

“…the crisis took years to emerge. It was caused by reckless lending practices, Wall Street greed, outright fraud, lax government oversight in the George W. Bush years, and deregulation of the financial sector in the Bill Clinton years. The deepest source, going back decades, was rising inequality. In good times and bad, no matter which party held power, the squeezed middle class sank ever further into debt.”

Before his inauguration, Obama proposed an economic stimulus plan, but, as Paul Krugman wrote, “Obama’s prescription doesn’t live up to his diagnosis. The economic plan he’s offering isn’t as strong as his language about the economic threat.”

In the end, the stimulus was even smaller than what Obama proposed. Economist Dean Baker explained that it may have created 2 million jobs, but we needed 12 million. It was $300 billion in 2009, about the same in 2010, and the remaining $100 billion followed over several years — too small to offset the $1.4 trillion in annual lost spending.

New York Magazine reports the stimulus was “a spending stimulus bigger, by some measures than the entire New Deal.” But unlike the New Deal, which benefited people at the bottom and built a foundation for a long-term economy, the bi-partisan post-2008 stimulus bailed out Wall Street and left Main Street behind.

Wall Street executives were not prosecuted even though the financial crisis was in large part caused by their fraud. …