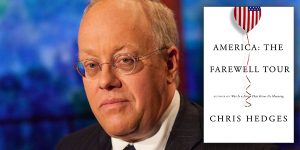 Chris Hedges is a New York Times Pulitzer-prize winning war correspondent who for two decades covered conflicts in Central America, the Middle East, Africa and the Balkans. He returned to the United States to become a powerful social critic and critic of capitalism, and is the author of a dozen books, including War is a Force that Gives us Meaning; Death of the Liberal Class; and Days of Destruction, Days of Revolt. He is a columnist for Truthdig and the host of the Emmy-nominated show On Contact on RT America.