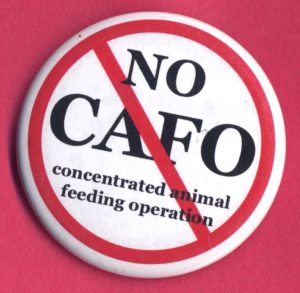 August is the busy season for shrimpers along the Gulf Coast, and fishermen like Randy Skinner and Lance Nacio should be heading out in their trawlers to try to haul in a day’s catch.

But instead, last week Skinner and Nacio traveled more than 1,000 miles north to central Minnesota to share stories about how what happens along the Mississippi River is affecting their livelihood.

Every year, a dead zone about the size of Connecticut forms in the Gulf of Mexico. It’s caused by excess nutrients washing down the Mississippi River — and it has a major impact not only on fish and marine life, but on the people who earn their living on the Gulf.

Local clean water advocates invited Skinner and Nacio to the Brainerd area to talk about that impact. The pair toured a ranch near Staples, Minn., that uses sustainable farming practices and spoke at a harvest dinner with local farmers at Sunup Ranch near Brainerd.

“I’m here to give my point of view on what happens on the other end of the Mississippi River, because we see the effects of everything that’s coming out of the river,” said Skinner, who began shrimping in Alabama’s Mobile Bay when he was 13. He turns 63 this year.

Nacio owns a shrimp and fish company in southern Louisiana, where his family has been in the business for generations. Despite all those years of experience, it’s getting tougher to make a living in shrimping.

“We have to travel further depending on how bad the dead zone is,” Nacio said. “We get fish kills along the coast where hypoxia is a problem.”

A “dead zone,” also known as hypoxia, happens when nutrients like phosphorus and nitrogen help spur algae growth. When the algae die and decompose, they use up all the oxygen, creating a zone where most organisms — including shrimp — can’t survive. …

(Commoner Call photo, 2017. Open course and free for non-derivative use with link to www.thecommonercall.org )