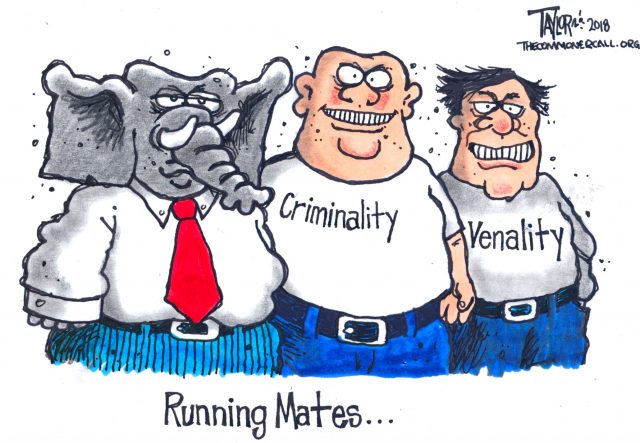 It’s difficult to imagine a worse day in the presidency of Donald Trump than Tuesday, when two gripping legal dramas, one involving his former campaign chairman, Paul Manafort, and the other embroiling his longtime lawyer, Michael Cohen, collided in a surreal split screen crescendo.

Unindicted Co-Conspirator Again In Our White House: A Turning Point In American History

Historians will mark August 21, 2018, as a turning point in American history.

President Donald Trump’s personal lawyer pleaded guilty to 8 counts of criminal wrongdoing that could carry a sentence of up to 65 years.

Most significantly, he pleaded guilty to having attempted illegally to interfere in an election “in coordination with and at the direction of a federal candidate for office.” … Read the Rest

Rep. Chris Collins (R-N.Y.), the first member of Congress to back President Donald Trump before the 2016 election, was indicted Wednesday by federal prosecutors and charged with fraud in connection to an alleged insider-trading scheme linked to his investments in an Australian biotech firm.

The third-term congressman, who represents a district in western New York, had been under scrutiny from the Office of Congressional Ethics for his connection to the company, Innate Immunotherapeutics. He was the company’s largest shareholder and served on its board.

Prosecutors say that in 2017, Collins passed inside information to his son, Cameron, who passed it to another alleged conspirator, Stephen Zarsky, father of Cameron Collins’ fiancee. … Read the Rest

Republican Rep. Duncan Hunter And His Wife Indicted For Use Of Campaign Funds For Personal Uses

The charges of wire fraud, falsifying records, campaign finance violations and conspiracy were the culmination of a Department of Justice investigation that has stretched for more than a year, during which the Republican congressman from California has maintained his innocence.
The detailed indictment portrays the Hunters as living well beyond their means … Read the Rest and 2+-Minute Video
*****

During the 2016 election, President Donald Trump regularly boasted that he only hired “the best people.”

Given that his former campaign chairman and his former longtime attorney are both headed to prison, CNN’s John Avlon decided to do a rundown of all of the most corrupt and inept people whom Trump has hired — and the results looked very bad for the president.

“Remember, this is not a complete list,” Avlon said before digging in. … Read the Rest and 3+-Minute Video

The Republican Party is feeling under siege now that two of President Donald Trump’s associates are headed to jail — and his first two congressional supporters have been indicted on corruption charges.

In an interview with Axios, one anonymous GOP operative didn’t sugarcoat how bad this is for his party, and simply said, “the Republican Party looks like a criminal enterprise.” … Read the Rest