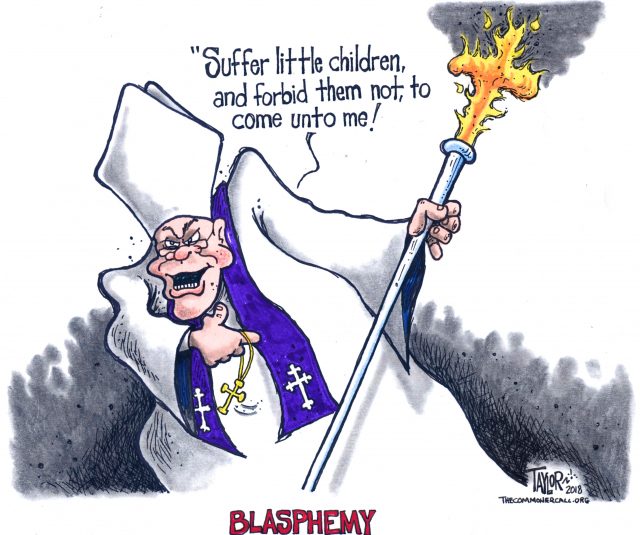 “The same victim also testified that the ring of priests groomed their victims with gifts. The priests would mark their “favorite boys” with gold cross necklaces.”

For decades, stories about clerical sexual abuse committed by Pennsylvania Catholic priests were reportedly locked away in the church’s secret archives.

These old secrets exploded into the light Tuesday with the publication of a grand jury report into six of Pennsylvania’s eight Roman Catholic dioceses.

The jurors’ 884-page report allowed Pennsylvania Catholics to finally grasp the extent of the abuse ― and cover-up ― in six dioceses: Allentown, Erie, Greensburg, Harrisburg, Pittsburgh and Scranton. Over the course of two years, jurors identified 301 “predator priests” and more than 1,000 victims.

Underpinning the horrific alleged crimes in the report are hundreds of pages of documents from the church’s secret archives that the jurors claim show that senior church officials knew the abuse was happening and failed to act properly. Catholic leaders, including former bishops, actively worked to protect abusers and the church’s public reputation, while brushing aside victims’ reports, the jurors claim. …

A Culture Of Catholic Church Secrecy That Perpetuated Abuse

“You were lucky, you were only abused fifteen times.”

A grand jury report found that Roman Catholic priests had abused more than 1,000 children in Pennsylvania over a period of 70 years. Some church officials say the report reiterates issues that have already been addressed, but details suggest otherwise. Guest: Laurie Goodstein, a national religion correspondent for The New York Times.

If the Catholic Church wasn’t a religious institution, would we be handling the situation differently?

“They would have been arrested under the RICO federal laws already and they would have been considered organized crime,” Pennsylvania State Rep. Mark Rozzi, a Democrat, told Salon. Rozzi is more than just a proponent of passing new legislation to help victims of childhood sex abuse, whether from employees of the Catholic Church or other organizations; he is also a victim himself, one who was raped by a priest in a rectory shower in Pennsylvania when he was 13 years old.
Although Rozzi still identifies as a Catholic and is proud of his Catholic heritage, he acknowledged that the Catholic Church’s attempts to thwart legislation that would protect future victims could be interpreted as a blurring of the separation between church and state.

“That’s a real possibility,” Rozzi told Salon. “There’s no doubt that the Catholic Conference, the legislative arm of the Catholic Church, is out there spending millions. The last time the bill passed the House with the retroactive component in it and went to the Senate, they hired 39 lobbyists to work 50 Senators. How do victims even compare to that?” …