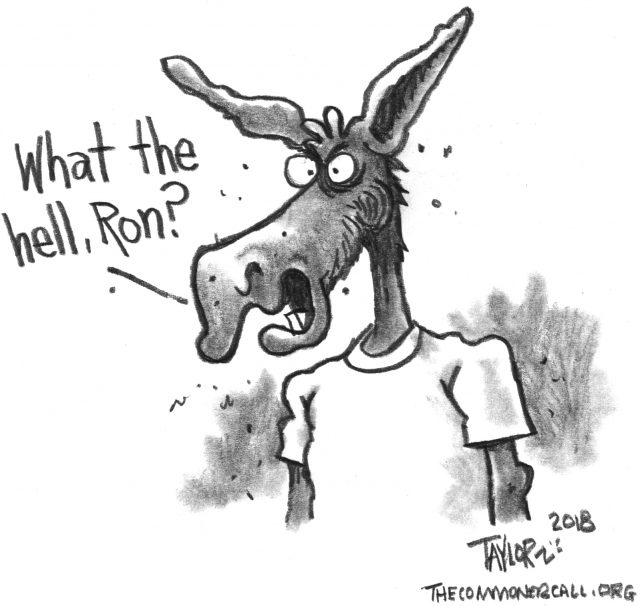 For those who closely watch Rep. Ron ‘Wall Street’ Kind there is a clear understanding of the two Ron Kinds. The first is the upbeat, sunny, good looking, glad-handing pol with the rolled up sleeves waving to the crowds at the annual Westby Syttende Mai parade.

As the story below details, on five important legislative initiatives of importance to the health, wellbeing and future of Wisconsin families Ron Kind is AWOL on all five. In fact, of the three Wisconsin dem reps, Kind is the only one to not support a single proposal, putting him in the ranks of Sean Duffy, Mike Gallagher, Glenn Grothman, Paul Ryan and James Sensenbrenner.

It’s been years since I have voted for Ron Kind. I joyfully leave that slot on the ballot empty. Dem friends will implore me to vote for Kind explaining: “Yeah, I know he’s a weasel and a corporate stooge but at least he’s a democrat!”

No he’s not. He’s a republican.

Don’t fall for mindless partisan groupthink. In the November midterms do yourself and the Third Congressional District a favor and leave the slot on the ballot for the 3rd congressional rep blank. Perhaps if his numbers soften that will encourage a progressive who really cares about the district over Wall Street to run against Kind in 2020.

In the meantime, when you see a smiling Ron Kind patting kids on the head at the next Syttende Mai parade know that back in D.C. he doesn’t give a damn about that child having health insurance or a fair shot at future economic security.

With the momentum and energy within the Democratic Party clearly tilting towards those willing to embrace a bolder, progressive set of policies and priorities, a new congressional scorecard released Tuesday reveals that only twelve lawmakers in the U.S. House of Representatives have put their support behind five specific bills that would “collectively ensure a strong, just future of public health and environmental protection” in the country.

The progressive scorecard—created jointly by National Nurses United, Food & Water Watch, and Progressive Democrats of America—is intended to be used as tool by voters to determine whether or not their lawmakers are putting their political muscle behind ambitious and visionary legislative proposals already introduced in Congress. The groups behind the effort say would dramatically improve the lives of Americans if ultimately voted into law.

“These five bills are vitally important to ensure the health and safety of the American people and of our planet.”
—Jean Ross, National Nurses United

“To build an equal and just society in which every person can live a healthy life, Members of Congress must support bold progressive policies that address the public health and environmental crises that are ripping our country apart,” the groups declared.

According to the Congress-Scorecard.org website—where visitors can check the record of their own member of Congress or any member via a state-by-state index—the five bills on which the scorecard is based include:

“These five bills are vitally important to ensure the health and safety of the American people and of our planet,” Jean Ross, RN, co-president of National Nurses United.

After that, there are an additional thirteen Democratic lawmakers who are backing four of the five bills.

“In today’s tumultuous world,” said Food & Water Watch executive director Wenonah Hauter, “it is important for all Americans to know exactly who in Washington is standing up for our most essential needs: a clean, livable environment, quality universal healthcare, and a more just, equitable society for all. By advocating for bold solutions to our most pressing health and environmental problems, these 12 Congress members have shown they are public health and environmental champions in Washington.”

“The progressive and dynamic dozen Congressional members sponsoring all five of these critical bills understand the deep integration between access to health care, economic justice, clean water, and the health of our planet,” added Donna Smith, the executive director of Progressive Democrats of America.

Along with her allies, Smith invited people across the country to check out how their lawmakers scored and then urged those constituents to get “to work to move their members to co-sponsor these critical bills and be environmental and public health champions.”