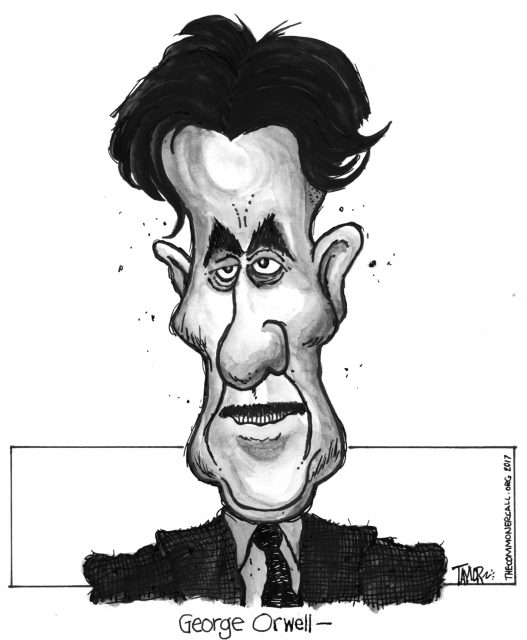 “Power is in tearing human minds to pieces and putting them together again in new shapes of your own choosing.”

In his too-brief lifetime novelist George Orwell had seen two disastrous world wars, witnessed the rise of brutal fascist regimes in Germany and Italy and fought as a resistance fighter on the front lines in another, in Spain. He had witnessed the mechanization of industrial scale death from World War I with the advent of machine guns, tanks and gas warfare to the development of nuclear bombs.

His Europe had been the home of death camps and seen two brutal fascist regimes replaced by the rise of a threatening and expanding Soviet power under the direction of yet another mass murderer, communist Josef Stalin.

All of that was the bloody soil from which Orwell’s dystopian novel “1984” emerged in 1949.

“Doublethink means the power of holding two contradictory beliefs in one’s mind simultaneously, and accepting both of them.” — Orwell, “1984”

The novel is set in Airstrip One, what had once been known as Great Britain but now was just another outlier in the superstate of Oceania, which was locked in perpetual war. Erasure of independent speech and “thought crimes” is strictly enforced by “Thought Police”.

Orwell’s main character is Winston Smith, a small cog in Oceania, whose job at the Ministry of Truth is to rewrite news stories so that history will forever conform to the ever changing party line. While good at his job and quick to send offending facts down the ministry’s “memory hole”, Winston hates his job and the regime. He longs for freedom and love.

The fact that a 1949 dystopian novel  distilled from the tragedy of fascist war and communist suppression is so appropriate to today’s reality should be a wake-up call to all. Bustle.com recently paired quotes from “1984” with photos of our now every day world. As the article’s writer, Mady Foley notes:

“If the following quotes make you scared, good. If you finish this article furious and desperate, even better. Cherish these emotions, honor your anger, and let it propel you forward.”

“Orthodoxy means not thinking — not needing to think. Orthodoxy is unconsciousness.”

“Power is in tearing human minds to pieces and putting them together again in new shapes of your own choosing.”

(Commoner Call story by Mark L. Taylor, 2018. Open source and free for non-derivative use with link to www.thecommonercall.org )