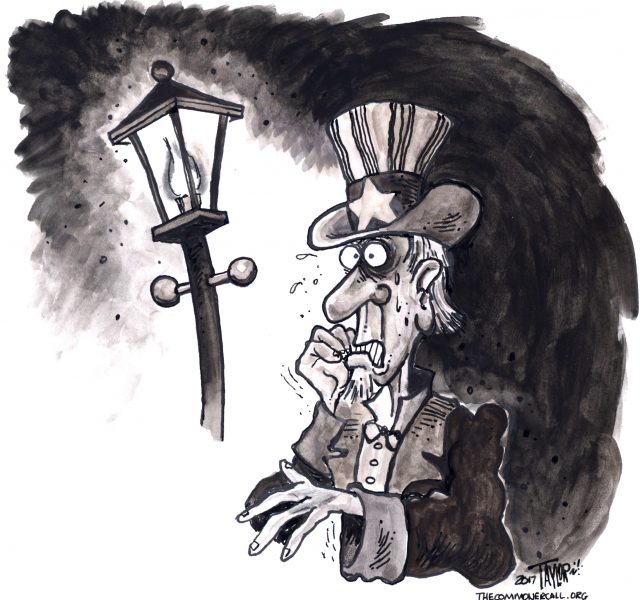 “The Party told you to reject the evidence of your eyes and ears. It was their final, most essential command.”

“It’s all working out,” Trump told a gathering of Veterans of Foreign Wars (VFW) in Kansas City, Missouri. “Just remember: What you’re seeing and what you’re reading is not what’s happening.”

Journalists and observers immediately drew comparisons to a line from Orwell’s book, which reads, “The Party told you to reject the evidence of your eyes and ears. It was their final, most essential command.”

The remark was made as the president promoted his plan to hit China with new tariffs in an address that took on the form of a campaign speech. Trump’s escalating trade war has resulted in rising costs for some products that farmers rely on, as China has responded to Trump’s first round of tariffs introduced earlier this month.

“Don’t believe the crap you hear from these people—the fake news,” he said of reports of the negative impact of his trade policy.

It was just Trump’s latest attack on the news media, which he has denounced as “really bad people” and “dishonest” and whose licenses he threatened to revoke last year, complaining of the news media’s negative coverage of his presidency, including Special Counsel Robert Mueller’s investigation into his 2016 campaign’s contacts with Russia.

In addition to negative coverage of his tariff proposals, whose impact he attempted to offset on Tuesday with $12 billion in emergency relief for farmers—a move that was dismissed by trade groups as “a short-term attempt at masking the long-term damage caused by tariffs”—Trump is facing new questions over the tape his former attorney, Michael Cohen, released on Wednesday.

The president is heard apparently asking Cohen how much money is available to transfer to Karen McDougal, a former model who claims to have had an affair with Trump, in exchange for her story.

The tape was recorded during the 2016 campaign, offering new evidence that the president may have violated campaign finance laws.

Here’s How Gas Lighting Works In Every Day America: Twisting The Meaning Of A Single Word

Every victim of a crazy, abusive relationship or childhood suffered at the hands of an abusive parent knows what it means to be the target of “gas lighting”, even if they have never heard the term.

It is taken from “Gaslight”, a 1944 Oscar-winning mystery-thriller movie starring Ingrid Bergman, Charles Boyer and Joseph Cotten about a woman whose husband slowly manipulates her into questioning her reality and making her believe she is going insane. Gaslighting is when someone in some position of relationship or power lies with a boldness then denies lying, instead causing the victim to believe they may have just misunderstood, or been too sensitive or dull to figure out what was originally said. Over time, they become confused trying to keep the contradictory information, lies, half-truths and manipulation sorted in their mind. In gaslighting one’s reality is denied, mocked, discounted and eventually doubted in the victim’s own mind to the point where reality itself falls apart.

Remind you of anybody? Anybody orange, bloviating and prone to Tweeting out the most insane crap in the middle of the night? Like Tweets accusing the former president of wiretapping?

What Trump is doing is gaslighting America.

Turning up the gas light

Just consider the recent craziness regarding the accusations that Barack Obama had wiretapped Trump before the inauguration. The FBI said it didn’t happen. Senators and representatives from both parties have said it didn’t happen. So then Trump switches tactics and accuses the British of doing the deed for Obama. The British go ballistic and say it didn’t happen and, again, bipartisan denunciations of Trump’s new claims. Trump offers no evidence, even though he has the sole power to declassify and display any classified document he wishes to. White House spinmeisters Sean Spicer and Kellyanne Conway say, yes, no … and watch out for your microwave.

Trump is undeterred and Americans are left wondering, “What the hell?”

In a topsy-turvy Trumpian universe facts don’t matter. History is a rumor. Science is irrelevant. Up is down and black is white and you are a crazy person. Surprise, you’ve been gaslighted!

Now actually, the Republicans have been doing this kind of stuff for a long time and they do it with manipulation of the language; with a deft linguistic sleight of hand an inheritance tax becomes a “death tax” as common sense work safety standards become dreaded regulations. They have perfected the art of selling strychnine as linguistic butterscotch. There are all kinds of examples that I will explore in future columns but let’s look at one that especially sets me to grinding my teeth: the abuse of the work “reform”.

After all, who would oppose a “reform”? Reforms must make things better, right?

The Republicans say they will reform Social Security … by cutting benefits.

They promise to reform Medicare … by reducing funding.

Republicans declare it is time to reform work safety … by getting rid of common sense safety standards.

Worried about the financial system? Why the GOP will gladly reform banking safety standards … by eliminating them!

Why just last week we were told that by kicking upwards of 24 million off of health care coverage Paul Ryan and his merry band of Grinches are reforming Obamacare.

The only “re-forming” going on is the forming of a whole new meaning for the word and a perversion of the language: black is white; up is down and you are a crazy person.

As we have seen with his manic daily Tweet storms, Trump will keep shoveling the lies out at a frantic pace to intentionally overwhelm, confuse and exhaust us all to the point where we not only can’t tell what is true or not, but many will stop even caring. This is exactly what Vladimir Putin – Trump’s soul pal – has done to the Russians. Both depend upon a confused, disoriented and numbed out population to build their kleptocratic regimes.

As linguistic researcher George Lakoff has demonstrated in his research on neurolinguistics, language can be made to frame political argument in a way that will get people to support legislation that will devastate their families, destroy their communities and vote in politicians who have the morality of sociopaths. In his book, “Don’t Think of An Elephant! Know Your Values And Frame The Debate” (2014), Lakoff puts it all in an understandable frame.

In the months – and years – to come, understanding and resisting gas lighting will be key to preserving your sanity and mounting the resistance that will be needed to save ourselves and our nation for our children.

How To Deal With Gaslighting

[Editor’s Note: These tips for the personal apply to the political. Rule One: BE DEFIANT! — Mark L. Taylor]

Gaslighting is an emotionally abusive tactic that makes the victim question their own sanity and perception of reality. In this important talk, Ariel Leve shares some of the life-saving strategies she adopted as a child to survive her mother’s gaslighting.

(Commoner Call cartoon and article by Mark L. Taylor, 2017. Open source and free to use with link to www.thecommonercall.org ) 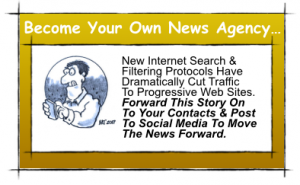