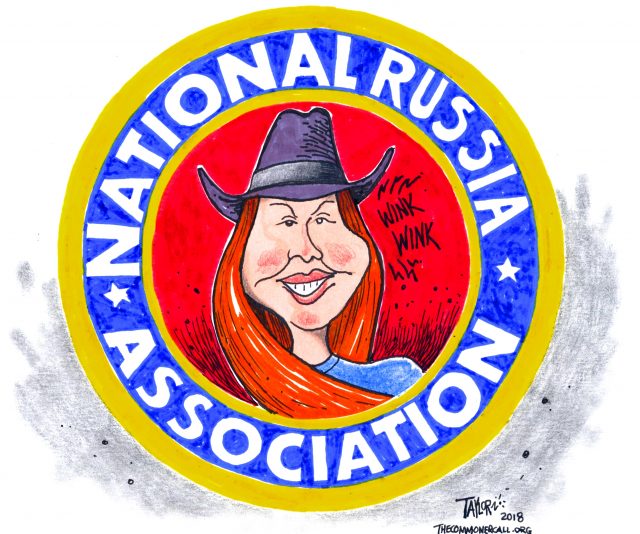 It typically takes a mass shooting to keep the National Rifle Association this quiet.

As of this writing, the NRA has issued no public comment about this week’s arrest and indictment of Maria Butina, a 29-year-old Russian gun rights activist who had spent years ingratiating herself with the NRA, as well as Republican politicians and conservative notables. Butina is suspected of conspiracy to act as an unauthorized agent of the Russian Federation within the United States without the authorization of the Attorney General.

And yet all we hear from the notoriously outspoken group is crickets.

The NRA contributed $30 million to help elect Donald Trump in 2016. The FBI has been investigating whether some or all of that cash may have been supplied by Russia. Rolling Stone reported in April that the Russian central banker Alexander Torshin, along with Butina, had deeper ties to the NRA than previously known. The NRA even flew a delegation to Moscow in 2015 to meet with Kremlin officials, including one freshly sanctioned by the Obama administration.

One member of that delegation, disgraced former Milwaukee County Sheriff David Clarke, filed an ethics report in February 2016 showing that $6,000 of his trip expenses were paid for by Butina’s group, The Right to Bear Arms. The recently departed NRA president, Pete Brownell, covered $14,000 of Clarke’s airfare and visa expenses. The details continue to trickle out.

And yet, the NRA hasn’t said one word either in Butina’s defense or to distance itself from her and Torshin, Butina’s alleged handler who has also been hit by U.S. sanctions. On Wednesday, a new court filing alleged that Butina was sexually involved with an American connected to the NRA, which media reports have identified as veteran Republican operative Paul Erickson. More importantly, the court memo alleged that Butina had been in contact with the Russian intelligence agency FSB, which replaced the more infamous KGB. As Rolling Stone reported in April, Torshin received a medal from the FSB in 2016. …

MSNBC host Rachel Maddow is floored that the National Rifle Association has managed to stay silent given their link to alleged Russian “spy” Maria Butina.

On her Wednesday show, the host walked through the concerns held by government lawyers about handing over documents in her case. Normally the prosecution would give everything they have to the defense team so they can mount an actual defense. In this case, the government has a concern that if they turn that data over, it will get used by Butina’s lawyers in the media.

During her Wednesday show, Maddow read through the back and forth between lawyers and the judge in the case that exposed just how much information is available about the Russia investigation

Prosecutor Thomas Saunders told the judge “the government has substantial discovery they’re ready to turn over right away. Right now we already have about 4 to 6 terabytes of data the equivalent of over 1.5 million files that we’re ready to turn over just as fast as it can be loaded onto a portable hard drive.”

That was just the first batch. There’s a second one of equal size, he said. …

The Maria Butina Indictment Isn’t About The Sex Life Of An Accused Spy. It’s About Following Russian Money & Influence In U.S. Politics

THE FEDERAL INDICTMENT of Maria Butina, the 29-year-old gun rights activist charged with being a Russian agent, has attracted plenty of media attention this week — but mostly for the wrong reasons.

Many stories about her case have been filled with salacious allegationsabout her sex life and have been rife with superficial comparisons to the television show “The Americans.” What has been missing in the media narrative is the indictment’s ominous significance. The Butina case is almost certainly the opening move in a brand new front in the Trump-Russia investigation.

Butina is just a minor figure in what appears to be a broader ongoing inquiry into the relationships between Russia, conservative American organizations like the National Rifle Association, and Donald Trump’s presidential campaign. For months, federal investigators have been looking into whether the NRA or other conservative organizations were used by the Russian government or Russian oligarchs to funnel money to the Trump campaign during the 2016 election.

Investigators working with special counsel Robert Mueller have repeatedly questioned Russian oligarchs traveling to the United States about whether they made cash donations directly or indirectly to Trump’s campaign or his inauguration, CNN reported earlier this year. In at least one case, they stopped a Russian oligarch when his private plane landed in New York. …