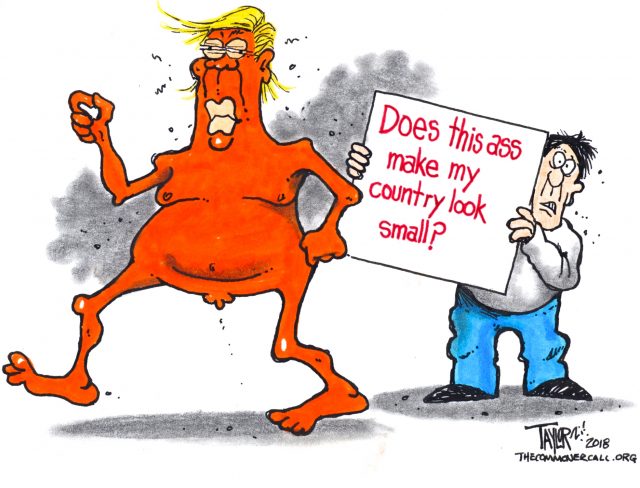 The Manchurian Money-Launderer has just kissed every inch of his mafia don’s anatomy.

The Donald has been washing Russia’s mob cash since the 1980s. The constant stream of ruble injections has funded his many bankruptcies.

In 2016, GOP election thieves like Kris Kobach, Jon Husted, Scott Walker, Rick Snyder, Rick Scott (state secretaries of Kansas and Ohio, governors of Wisconsin, Michigan and Florida) and so many more turned Trump’s 3-million-vote loss to Hillary Clinton into a victory for the Russian mob and America’s corporate 0.01%. They’re set to do it again in 2018 and 2020.

The brutal, ruthless Putin is orders of magnitude more savvy and capable than the orange American. Globally, he is the mob boss Don Corleone, lording it over his addled son Fredo.

Amidst Trump’s Helsinki rant storm against US intelligence, Putin admitted he favored Trump in the 2016 election.

In light of Trump’s invitation to hack the Democrats, Putin magnanimously hinted he might allow American legal representatives to listen in while his KGB consiglieres “question” operatives indicted by Robert Mueller for doing what Trump asked them to do.

Trump’s Helsinki treason raises two questions: Will it wobble his base? Will the brain-dead Corporate Democrats get out of the way?

Nationwide, Trump continues to maintain poll support between 35% and 45%. 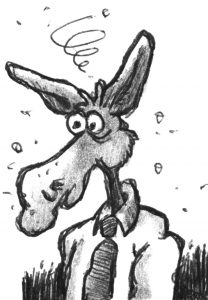 “It won’t be enough to merely show how terrible this mafia underling really is. It also will take an alternative vision, which the Corporate Democrats seem incapable of presenting. The likes of Chuck Schumer and Nancy Pelosi, Andrew Cuomo and Diane Feinstein need to step aside if we are ever to be rid of Trump, Putin, and their fascist Russo-American mob.”

But at the top, the right-wing response borders on the astonishing. The spectacle of an American president trashing US intelligence agencies in the presence of a foreign dictator was too much for many of even the most loyal.

Former far-right Illinois congressman Joe Walsh, now a radio shock jock, said: “Trump was a traitor to this country today.” Donald “made it clear” he favors Russia over the US. “What you saw was ‘collusion’ on the world stage.”

Trump was guilty of “high crimes & misdemeanors,” tweeted former CIA chief John O. Brennan in a call to “Republican Patriots.” Donald’s remarks were “imbecilic” and “nothing short of treasonous.”

Arizona Republican John McCain added: “No prior president has ever abased himself more abjectly before a tyrant. Today’s press conference in Helsinki was one of the most disgraceful performances by an American president in memory.”

Nebraska Republican Ben Sasse said every senator “should be disgusted by what happened in Helsinki today.”

Lame duck House speaker Paul Ryan, the Ayn Rand cultist who would kill Social Security and Medicare, said, “there is no question that Russia interfered in our election and continues attempts to undermine democracy here and around the world.”

But will all that uproar shake Trump’s fascist grassroots/corporatist support? The New York Times reports he’s already raised $88 million for a 2020 re-election campaign. His ceaseless outrages seem to bounce off the armor of an iron-clad constituency. Having “joked” he could kill someone in public and not drop in the polls, he now seems set to prove the same thing about stabbing the whole country in the back.

On the left, the Times ran a rare full-banner page one headline: “Trump, at Putin’s Side, Questions U.S. Intelligence on 2016 Election.”

More importantly, a recent open letter in The Nation, signed by an all-star cast of progressive notables, rightly warns against increased hostility between Russia and the US. Had Helsinki been a meet-up between Putin and Hillary Clinton, we might well be on the brink of nuclear war.

But the Putin-Trump mafioso bromance is less about geopolitical rivalries than the foreign ownership of an incompetent interloper by a master manipulator, and the overall vulnerability of our rickety, corrupted electoral system, no matter who is on the attack.

Predictably, the Corporate Democrat money machine has seized on the image of a wig-wearing Benedict Arnold trashing US intelligence in the presence of a foreign dictator. The endless flow of outraged fundraising emails now features this latest Trump infamy.

But the party itself remains as visionless as ever. It’s yet to endorse Medicare for All, a real push to end poverty, a moratorium on student loan payments, a genuine effort to regulate Wall Street, an end to Empire, real resistance to the Koch/Putin fossil/nuke juggernaut, a Solartopian vision for a green-powered earth, a genuine attempt to protect our elections from being stripped and flipped by domestic operatives, or much of anything else.

The NY Congressional victory of 28-year-old democratic socialist, Alexandria Ocasio-Cortez, has sent shockwaves through the party elite. Progressive California Assembly president Kevin de León has just won the state party’s endorsement for US Senate over the corporatist incumbent Diane Feinstein. Feinstein won the recent primary and has a huge financial advantage. But a de León victory has become more of a possibility.

There’s much more. The Progressive left has never stopped resisting Trump, and this latest treason can only deepen the effort.

Ultimately, it won’t be enough to merely show how terrible this mafia underling really is. It also will take an alternative vision, which the Corporate Democrats seem incapable of presenting.

The likes of Chuck Schumer and Nancy Pelosi, Andrew Cuomo and Diane Feinstein need to step aside if we are ever to be rid of Trump, Putin, and their fascist Russo-American mob.

Harvey “Sluggo” Wasserman’s Life & Death Spiral of US History: From Deganawidah to the Trumpocalypse will soon be at www.solartopia.org. His California Solartopia is broadcast at KPFK-Pacifica 90.7 FM Los Angeles; Green Power & Wellness is podcast at prn.fm.

Benedict Trump And ‘What If…’

Ann Arbor (Informed Comment) – White House spokesperson Sarah Sanders acknowledged that Russian President Vladimir Putin asked Donald Trump to let Russian security forces interrogate former US ambassador in Moscow Mike McFaul on US soil, and that Trump did not dismiss the request out of hand. He would, Sanders said, take it under consideration and consult his cabinet about it.

The bizarre episode is causing outrage in Washington, D.C., where there are a lot of officials who have served overseas and who would be in trouble if their enemies over there felt as though the White House no longer had their back. Clearly, simply making the request and publicizing it is Putin’s way of pressuring his critics in the US, like Mike McFaul and Bill Browder. It is like when goons from organized crime visit you and leave behind a bullet on your coffee table.

The episode is also to my knowledge unprecedented. I tried to think of historical analogies.

What if Leonid Brezhnev (Soviet Premier 1964-1982) had asked Lyndon Johnson if Soviet secret police at the Soviet embassy in Washington, D. C., could interrogate Kremlin critic Sen. Henry “Scoop” Jackson (D-WA)? I mean, Johnson did launch an attempt at “rapprochement” or reducing tensions with Moscow after the dire Cuban missile crisis, but his answer would have been colorful Texas expletives, not “I’ll think about it.”

President Donald Trump’s disastrous performance since his news conference alongside Russian counterpart Vladimir Putin has sent West Wing morale to its lowest level since the Charlottesville fiasco almost a year ago.

As happened last August, when the president refused to condemn neo-Nazi demonstrators, Trump’s attempts to tamp down outrage have backfired. Stilted statements followed by ad-libbed remarks left even his allies feeling that while the president was technically acknowledging a mistake, he actually meant what he’d said on the first go-round — that he believed Putin’s denials of Russian meddling in the 2016 election.

“People are just depressed,” said one Republican close to the White House. “Nobody wants to take on the public heat of resigning right now, but there are a bunch of people who were thinking maybe they’d leave after the midterms who are very seriously starting to consider accelerating their timetable.” …