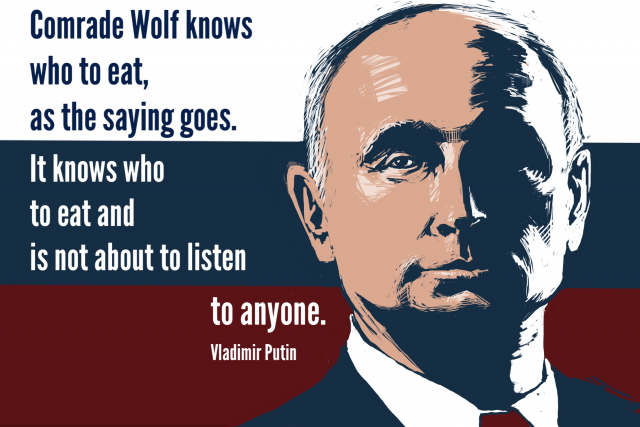 How do you give democracy a bad name?

You fail to deliver on its promise.

People fighting for democracy want individual rights and freedoms, but they also want and expect economic prosperity. So every democratic movement that doesn’t produce both the political and economic rights people expect becomes a nail in the coffin of democracy.

Russia’s experiment with democracy and market reforms started in 1991 but began to collapse with Vladimir Putin’s rise to power at the end of 1999. President Putin’s March re-election is the latest sign that the liberal experiment in Russia is over for the foreseeable future.

It also signals a loss in the struggle for liberal democracy globally. Today, a resurgent Russia is pushing for an alternate non-democratic model to rival the prevailing Western democratic one.

In 1945, war-torn states of the world came together to create the United Nations, an institution that from its start has preached democracy and human rights. The rhetoric of democracy spread throughout the world over subsequent decades, as did the apparent connection between Western democracy and wealth.

But the enormous, largely economic, expectations people have of democracy set the stage for popular disillusionment with new democracies.

As I argued in my most recent book, the anti-democratic movement we see most visibly in countries such as Poland, Hungary and Turkey today is an increasingly common response to the almost inevitable disappointment of democracy.

Perhaps Putin’s greatest success is in sowing turmoil in Western democracies themselves. By attacking global democracy in its Western heart, Putin simultaneously reveals democratic deficits and weakens those who might wage a counterattack to save their long-held values.

Soviet Russia, where Yeltsin grew up, was a global power abroad and a police state with a centralized economy at home. The average Russian during this communist period lived well enough, but the system was riddled with ridiculous inefficiencies, a lack of quality consumer goods and a frustrating degree of censorship.

Russians yearned for a free, well-managed state, with all the bubble gum and blue jeans that seemed to come with it. Yeltsin addressed these demands, promising a more democratic, market-based system.

Instead, Russians watched as Yeltsin clumsily dragged the country through a decade of lawlessness, poverty and humility, all in the name of American-supported democracy. The economy plummeted while a new tiny class of ostentatious “haves” made their fortune frequently by plundering what people had built during Soviet times.

As social norms and structures crumbled under the weight of democratic capitalism, so did the central government’s control over the vast country’s regions. The vivid pictures of Yeltsin shelling his own uncooperative parliament and soldiers swapping weapons for spirits in the streets of occupied Chechnya encapsulate the destruction early democracy meant for most Russians.

Since taking power, Putin has cast himself as Yeltsin’s antithesis and Russia’s savior. He has consolidated power with a strategy based on hope, destruction and suspicion of perceived enemies, whether terrorists or democrats.

In his first two terms, from 2000 to 2008, Putin inspired hope, with the first pillar of his rule, by reversing Russia’s decade-long slide into economic turmoil. Thanks to increasing energy prices, the economy grew by 83 percent and the purchasing power of Russia’s citizens more than doubled to US$21,600. Rising oil and gas revenues filled state coffers and allowed Putin to revive governmental spending on everything from social welfare to military modernization.

Putin also stuck up for the everyday Russian, chasing and even jailing the so-called oligarchs, or at least those who refused to stay out of politics. Regional fiefdoms went back to bowing to Moscow.

To maintain this image of security and prosperity, Putin has relied on a second pillar: destruction.

Yeltsin’s Russia was never a hallmark of democracy. But over the past 18 years, Putin has worked to dismantle whatever inconvenient democratic institutions managed to take root.

Free media outlets were shuttered. Civil society organizations were strangled. Electoral institutions were carefully manipulated to ensure Putin and the United Russia party backing him could not be beat.

According to Freedom House, a nonprofit organization that rates countries based on political rights and civil liberties, Russia now ranks among the least democratic fifth of all countries in the world.

It’s nearly impossible to contest Putin today. Media freedom has been severely curtailed with state media coverage practically scripted by the Kremlin. Those who stand up to Putin risk arrest and imprisonment. Many of Putin’s most vociferous foes have died under mysterious circumstances.

Putin’s destruction of democratic institutions has guaranteed his time in power will exceed that of Russia’s brutal dictator, Joseph Stalin, who consolidated power in the 1920s and ruled until his death in 1953.

Just as Stalin warned of “the capitalist encirclement,” or Western attempts to surround and manipulate the country, Putin has created enemies to unite his population. Putin’s hasty rise came in the wake of a series of apartment bombings that rocked the country’s capital in 1999. Then, Putin blamed Chechen terrorists and promised to find the culprits wherever they might hide. Since then, he has sold himself as the antidote to danger and guarantor of stability.

After spending billions of dollars on military modernization, Putin gradually began to aggressively counter perceived enemies outside of Russia as well. His initial targets were the two countries where Western-supported democratic revolutions threatened to increase NATO’s presence in the region. Putin started small, invading Georgia in 2008, and then went bigger, taking Crimea from Ukraine in 2014. After years of military modernization, Putin finally went global with his full-scale intervention in Syria in 2015.

Of course, off the battlefield, Putin’s international footprint is even larger. With liberal democracy now on his list of perceived enemies, Putin has sought to portray Western states as both chaotic and menacing. And he has moved to curtail the threat.

Putin’s regime has been implicated in everything from interfering in Western elections and poisoning enemies in exile, to supporting an anti-Western Syrian regime accused of chemical attacks on civilians.

With every incident, Putin and his entourage have played the bullied, not the aggressor. They mock Western conventions of due process by questioning the assumption of Russia’s guilt and demanding the sorts of evidence they know Western intelligence agencies cannot produce. They manipulate a rash of “fake newsites” to condemn the West for spreading “open lies and disinformation.” They warn of the West’s next provocation in its mission to keep Russia down.

All of this has made Putin tremendously popular and left Russia’s few remaining democrats in the political wilderness. It has also emboldened others to take up the fight against liberal democracy in the hope of building a successful illiberal state like Russia.

Hungary’s Viktor Orban, who went from top anti-communist dissident to a cheerleader for illiberal democracy, is the most blatant example. Poland, while less enthusiastic about Putin, has followed suit, recently politicizing the judiciary and limiting free speech. Turkish President Recep Tayyip Erdogan, who recently strengthened his oppressive hand through constitutional changes, has shown fellow NATO members that Turkey has an alternate partner in Putin.

Perhaps Putin’s greatest success is in sowing turmoil in Western democracies themselves. By attacking global democracy in its Western heart, Putin simultaneously reveals democratic deficits and weakens those who might wage a counterattack to save their long-held values.

(Republish our articles for free, online or in print, under Creative Commons license.)