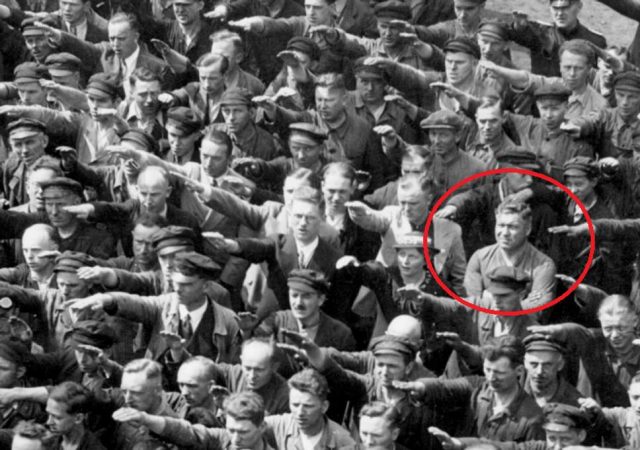 Go along or resist. Stand up or lay down. Speak out or be silent. There will be no neutral.

The arrival of government detention — concentration — camps for an oppressed and dehumanized minority group means that politics in America is about to become far more personal and much, much more consequential. The kidnapping of children into for-profit concentration camps has added an especially grotesque dimension. The forcible separation of parents from their infants and children into concentrations camps have made it official: We are living in a fascist state now.

With the news of yesterday’s retirement on the Supreme Court the capture of the court by the corporate fascist right is complete. Trump — and Wall Street – are likely to have another appointment before Trump’s first term is completed. Expect to see the kidnap and concentration camp program found constitutional by the court … and expanded to other “undesireables.” Given the Supreme Court’s judicial supremacy, the shaky judicial branch of the federal government has fallen, snaping all three branches of government into line with the fascist field manual. To see what is in store check out Nancy MacClean’s Democracy In Chains: The History of the Radical Right’s Stealth Plan For America. Unless we organize and resist, MacClean has laid out our future in black and white.

Consumer advocate and political organizer Ralph Nader has long said, “If you don’t do politics, politics will do you.”

Well, Trump’s America is about to do a lot of “doing” and citizens will need to make a decision: Go along or resist. Stand up or lay down. Speak out or be silent. See or close the eyes. You will either be in resistance or a part of the machine now clicking into place. You will either be a hero, or a coward. There will be no moral neutral, just as there is no neutral in the famous photo above of German citizen August Landmesser at a 1936 Nazi rally Hitler was personally addressing. If we were to compare where we are now and where things were when Landmesser took his stand we are around 1934, though I may well be too blissfully naive in that estimate. Maybe it’s denial.

There are no moral bystanders

The government sponsored kidnapping and disappearing of children from their parents into distant government concentration camps beyond public view — including nursing babies and toddlers — has sling-shot this nation into a whole new political landscape. A whole new politics. The old Republican vs Democrat / Left  vs Right paradigm is dead and gone. We are in a moral zone that most have yet to fully appreciate and absorb.

In the coming months, think of the photo above and where you want to be. There will be no moral bystanders. To not act against injustice and brutality is to act for injustice and brutality. It is a choice that has now been thrust into the hands of every citizen. Silence is consent. Speak or be complicit in the crimes.

Adopted by the Nazi Party in the 1930s, Hitler’s infamous “sieg heil” (meaning “hail victory”) salute was mandatory for all German citizens as a demonstration of loyalty to the Führer, his party, and his nation.

August Landmesser, the lone German refusing to raise a stiff right arm amid Hitler’s presence at a 1936 rally, had been a loyal Nazi.

Landmesser joined the Nazi Party in 1931 and began to work his way up the ranks of what would become the only legal political affiliation in the country.
Two years later, Landmesser fell madly in love with Irma Eckler, a Jewish woman, and proposed marriage to her in 1935. …
Read the Rest