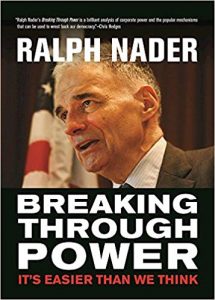 In this “On Contact” interview consumer advocate and political activist Ralph Nader and journalist Chris Hedges outline the problem and Nader lays out a path of resistance that would only take one percent of citizens to become involved. Before one can reform a system however, that system must be thoroughly understood and seen with unblinking clarity.  You will find both in this fast moving discussion.

Along the way Nader gives insight on what has gone amiss in the courts and American law schools and the true history behind Trump’s new “war monger” national Security adviser John Bolton. Both provide important background and context to former Sec. of State Hillary Clinton’s disastrous role in the fall of Libya, which has accelerated the refugee crisis across Europe which, in turn, has triggered the rise of vicious fascist parties and right wing nationalist movements echoing our own turn to fascist brutalism.

Nader gives a quick summary of the path back to citizen power, as he outlined in his book Breaking Through Power: It’s Easier Than We Think .