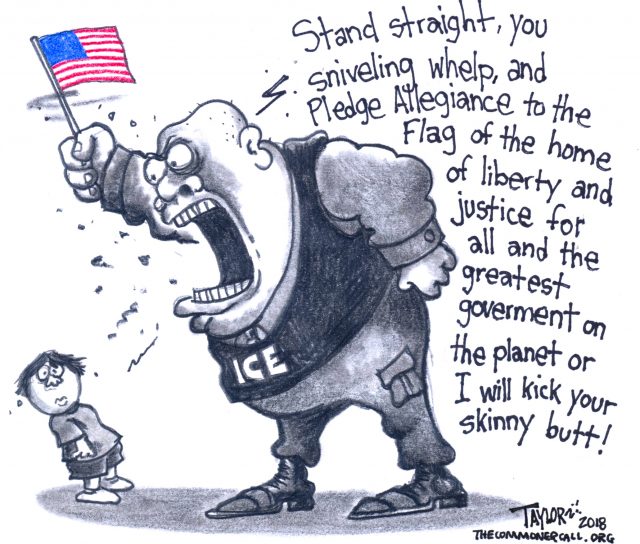 While tearing children away from parents under a policy designed to keep asylum seekers from entering U.S. society, the Trump administration is forcing those same children to pledge their allegiance to the country that is actively trying to expel them.

President Donald Trump signed an executive order last week stating that families would be detained together under his “zero tolerance” immigration policy, but thousands of children remain separated from their parents.

The Washington Post on Monday detailed the conditions in which many of those children are living, in detention centers like Casa Padre in Brownsville, Texas, describing “a converted Walmart where each morning they are required to stand and recite the Pledge of Allegiance, in English, to the country that holds them apart from their parents.”

A facility employee told the Post, “We tell them, ‘It’s out of respect.'” 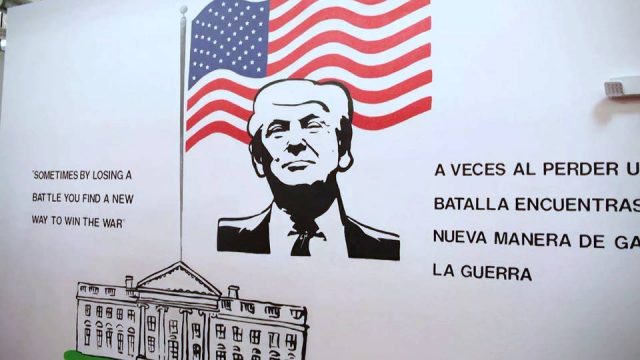 As details about the treatment of children in detention facilities have emerged, many have drawn comparisons to internment camps for Japanese-Americans that were established during World War II. Actor and activist George Takei’s memories of the camp he lived in as a child mirror the descriptions of children reciting the Pledge of Allegiance.

As the Post‘s report coincided with much discussion of the Virginia restaurant whose owner refused to serve White House Press Secretary Sarah Huckabee Sanders over the weekend—and other public protests against administration officials—many critics strongly pushed back against the notion that Americans should be concerned with “civility” toward the Trump administration—while children are being forced to show “respect” for the government holding them hostage.

Footage, audio, and photos from inside a children’s detention center in New York show a child crying and asking to speak with her mother and an employee ominously warning children that speaking to the press could endanger their immigration case.

A former employee of a facility in New York shared the material with “The Rachel Maddow Show” on MSNBC a week after quitting her job in protest of the Trump administration’s forcible separation of families.

In one clip, the employee speaks to a young girl named Jessica about her mother, who she says has been sent to Virginia and who she hasn’t spoken with in at least a week, and says she will try to connect the two.

Employees are instructed to keep their distance from the children in their care, according to the whistleblower, but she told MSNBC that toward the end of her time at the center she flouted the rule.

“I feel that it’s time for everybody to stand up and stop being afraid and actually help these children being separated from their parents.” — Concentration camp whistleblower

The woman quit her job after realizing the center was holding children who had been taken away from their parents, when a huge influx of younger children arrived at the facility in recent weeks.

“I am here today because I feel like it’s important to make a difference,” the whistleblower said. “I feel that it’s time for everybody to stand up and stop being afraid and actually help these children being separated from their parents.”

In one audio clip, another worker is heard telling a group of children that they shouldn’t talk to the press about the detention center—and suggesting that doing so could keep them away from their parents and in detention for even longer.

“If for whatever reason you tell a reporter—you know what’s going to happen to your case? It is going to be on the news, and then one doesn’t know what is going to happen—if you are going to last here for a long time. I am not trying to scare you. I am just telling you, it’s the truth. You have to be careful not to talk,” the employee is heard saying.

On social media, some applauded the employee for refusing to be complicit in the Trump administration’s “zero tolerance” policy—under which thousands of children are still currently being kept away from their parents, despite an executive order declaring that the practice was ending—and for shedding light on children’s experiences in detention.

Link to Story and 2 Brief Videos