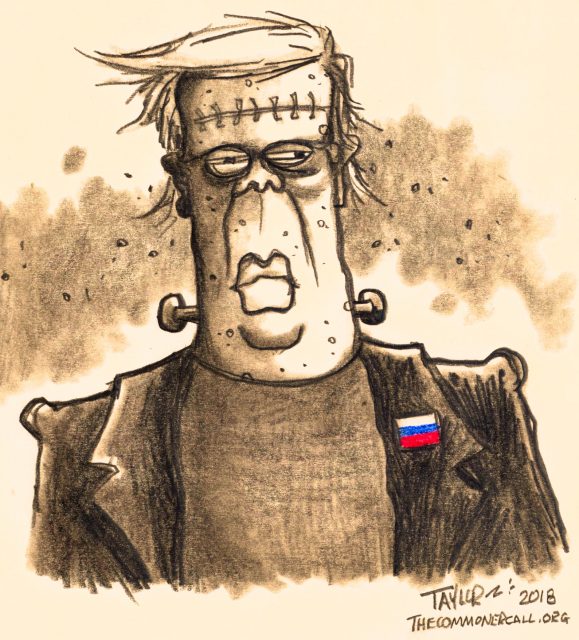 The speed of America’s moral descent under Donald Trump is breathtaking. In a matter of months we’ve gone from a nation that stood for life, liberty and the pursuit of happiness to a nation that tears children from their parents and puts them in cages.

Economist Paul Krugman is a smart Princeton professor who won a Nobel Prize, and most of what he says in this column is heartfelt, decent, and humane. His argument is relatively simple: since there is no present immigration crisis, there is no basis – practical, moral – no decent basis whatsoever for the current government’s inhumane, illegal, brutal treatment of immigrants and their children. In an apparently deliberate exercise of hatred and bigotry, the Trump administration is committing crimes against humanity.

That’s all quite true, quite obvious, and millions of people already recognize the government’s mindless cruelty for what it is – mindless cruelty that stimulates the mindlessly cruel base of Trump supporters from the cabinet on down.

But the way Krugman opens his column is mind-bogglingly delusional at best, dishonestly partisan at worst. Yes, “America’s moral descent under Donald Trump is breathtaking,” but notbecause of its speed. America’s moral descent has been with us from the beginning. America’s beginning was a struggle to ascend from the accepted moral order rooted in slave-holding authoritarianism, where inequality was God-given and women and children were property. The big difference between now and then is that then the angry white men making a revolution had enlightened ideals that were in conflict with the darker angels of their nature. The core dynamic of American history has always been the struggle between those who want to realize American ideals and those who don’t. The record is decidedly mixed, but the big victories mostly belong to the exploiters and killers. Trump is clearly in that line of descent.

Krugman asks us to believe that, in January 2017, America was “a nation that stood for life, liberty and the pursuit of happiness.” This is just a fantasy. These are words from the Declaration of Independence and have no weight in law that defines the nation. The preamble to the Constitution sets our national goals as a more perfect Union, Justice, domestic Tranquility, the common defence, general Welfare, and the Blessings of Liberty. In January 2017, our common defence was secure, except in the paranoid rantings of demagogues. Every other aspiration of the Constitution was in a shambles of long duration.

As he rose to the Presidency, Donald Trump was not so much a unique persona in triumph as he was the cobbled-together excrescence of more than 40 years of collective struggle by right-wing operatives trying to build their own fantasy of America, which Trump now embodies, perhaps imperfectly in the eyes of the idealist right. But he’s their Frankenstein creation and the rabble loves him, contradictory sewn-together bits and all.

Trumpenstein was a long time in the making, but one could see the first bits taking shape at least as early as Ronald Reagan’s presidential campaign. The racist veins were pulsing clearly at the kick-off in Philadelphia, Mississippi, in quiet celebration of the lynching of the three civil rights workers, Goodman, Chaney, and Schwerner, who went unmentioned.The racism of the right has only grown with race-based drug laws, race-populated prisons, race-based poverty, police executions, and on and on. The Clintons were shameful accomplices. No president since Reagan has dialed back American racism. Obama spoke eloquently about race, but that didn’t keep Republicans from racializing politics, much to the glee of the Tea Party, and Obama never pushed back effectively, instead becoming the deporter-in-chief after blessing the military coup in Honduras that later fed the immigration wave fleeing oppression and murder.

Yes, we are now officially “a nation that tears children from their parents and puts them in cages.” We are also a nation that took years to notice our official brutality to immigrants, especially asylum seekers, and most especially those seeking asylum from brutal dictatorships we nurture and support. American brutality on the border is hardly a serious departure from American brutality in Iraq or Vietnam or Korea or in nations of Native Americans where we took children and put them in cages we called Christian schools.

Krugman surely knows all this and more, so why won’t he see it or say it? It’s as if he’s drunk the kool-aid of American Exceptionalism and must deny anything not pre-blessed by our cultural cult. Republicans were rabid to impeach Clinton for lying about a blow-job, Democrats couldn’t even impeach Bush for lying us into war (a war we’ve yet to escape). Obama couldn’t even close Guantanamo, but he refused to prosecute the torturers, and now one of them runs the CIA. It’s taken America years of bipartisan betrayal to get where we are now, but how can we change if we can’t even say clearly and directly who we are and how we got this way?

Krugman is wholly justified in any moral outrage he may feel about the Trump administration, but he is not justified, morally or intellectually, in making Trump a scapegoat embodying longstanding American evils long promoted by the right with little opposition. Trump is a mirror for the country, and if the country doesn’t like what it sees, the country needs to change.