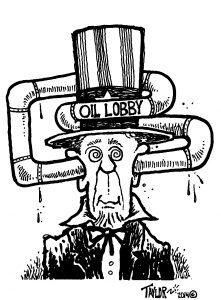 The proposal was reportedly introduced by Christine Pelosi, a member of the DNC and the daughter of House Democratic leader Nancy Pelosi.

“Climate change caused by the burning of fossil fuels represents an existential threat to civilization,” the text states, “and Democrats committed in our 2016 Platform to curbing the effects of climate change, protecting America’s natural resources, and ensuring the quality of our air, water, and land for current and future generations.”

The resolution cites President Obama’s ban on all corporate PAC donations to the DNC as well as his Farewell Address, in which he called on efforts to “reduce the corrosive influence of money in our politics, and insist on the principles of transparency and ethics in public service.”

The vote was cheered by environmentalists who have pushed progressive lawmakers to affirm their commitment to the climate crisis and swear off contributions from fossil fuel companies.

Looking to the grassroots

The resolution urges the DNC to encourage grassroots donors and “reject corporate PAC contributions from the fossil fuel industry that conflict with our DNC Platform” in order for Democrats “to walk our talk in harmony with our stated beliefs and convictions.”

The DNC will also consider banning contributions of over $200 from donors employed by the fossil fuel industry, according to HuffPost. That vote will take place at a board meeting in Chicago in August.

“So if Eddie Exxon is your college buddy and a frat-boy friend of yours and he’s employed at an Exxon gas station and wishes to donate $25 to have a barbecue and a beer with you, fine,” RL Miller, president of the super PAC Climate Hawks Vote Political Action and a co-author of the resolution explained to the website. “But if Edward J. Exxon in Exxon’s middle management thinks you’re worth contributing $2,700 to out of his own salary, that is much more concerning to us.”

The vote was cheered by environmentalists who have pushed progressive lawmakers to affirm their commitment to the climate crisis and swear off contributions from fossil fuel companies.

“Wow. This is a big step AND it’s serious proof that our pressure is working,” the Sunrise Movement, a youth-led climate action network, tweeted. “Now, the DNC must step up further and refuse all donations over $200 from fossil fuel execs to prove they value young people’s futures over oil and gas profits.”

(Commoner Call cartoon by Mark L. Taylor, 2018. Open source and free for non-derivative use with link to www,thecommonercall.org )

The Antarctic ice sheet is melting at a faster rate than at any previously recorded time, according to a comprehensive new study.

The planet’s largest ice sheet is now losing more than 240 billion tons of ice every year ― a threefold increase from less than a decade ago. The melting is happening so fast that it could cause sea levels to rise 6 inches by the end of the century, the study projects.

The accelerating pace of melting means rising sea levels could threaten coastal communities far earlier than scientists had expected. North America, particularly the East Coast of the U.S., could be particularly hard-hit.

The study, published Wednesday in the journal Nature, has been described as the most exhaustive analysis ever conducted on the changes to Antarctica’s ice sheet. The research involved more than 80 scientists from 44 international organizations and used data taken from multiple satellites, as well as air and ground measurements and computer simulations.

“We took all the estimates across all the different techniques, and we got this consensus,” Isabella Velicogna, an Antarctic ice expert at the University of California at Irvine, told The Washington Post.

The study, published Wednesday in the journal Nature, has been described as the most exhaustive analysis ever conducted on the changes to Antarctica’s ice sheet. The research involved more than 80 scientists from 44 international organizations and used data taken from multiple satellites, as well as air and ground measurements and computer simulations.  …

Read the Rest and Video