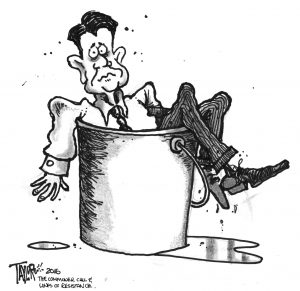 House Speaker Paul Ryan (R-WI) was soundly scolded on the internet after wishing “all of the dads” a happy Father’s Day as Republican President Donald Trump separates families at the border.

Speaker Ryan is a father of three children.
“My life changed the day I became a father. Liza, Charlie, and Sam are my highest priority,” Ryan tweeted. “Wishing all of the dads out there a happy early Fathers Day.”
The ensuing uproar was quick and passionate.

As a father who clearly cares for his children, Speaker Ryan should think of the agony that immigrant fathers are experiencing as their children are torn away from them due to the Trump Admin’s heartless policy and congressional Republicans’ complicity,” noted political scientist Miranda Yaver.

“Paul Ryan is wishing a happy Father’s Day to all the dads out there, except those who may be seeking asylum in this country and have had their young children ripped from their arms,” argued Brian Fallon. “Those dads get Paul Ryan’s cowardly silence.” …

After Forcibly Separated From His Family At The Border, A Honduran Father Took His Own Life

“They had to use physical force to take the child out of his hands.”

A Honduran father who was arrested and forcibly separated from his wife and child while trying to enter the United States, killed himself in a padded cell, according to a new report from the Washington Post.

The Post obtained a report from the sheriff’s department, which detailed how Marco Antonio Muñoz, 39, “was found on the floor of his cell May 13 in a pool of blood with an item of clothing twisted around his neck.” The deputies recorded it as a “suicide in custody.”

Muñoz, his wife, and their three-year-old son crossed the Rio Grande at the small Texas town of Granjeno on May 12, seeking to apply for asylum, according to border patrol agents the Post spoke with about the matter.

Once they were taken to McAllen to a processing stating, they were told they would be separated, and Muñoz “lost it” according to the agent who spoke to The Post.

“They had to use physical force to take the child out of his hands,” the agent said. Muñoz was extremely “agitated” and the Border Patrol considered him “pre-assault” despite never attacking agents.

He repeatedly attempted to escape and they moved him to a jail cell at the Starr County Jail, where he was then placed in a padded cell. He was praying in the corner of his cell the following morning. Shortly after, he was found dead with a piece of clothing twisted around his neck, in a pool of blood. …