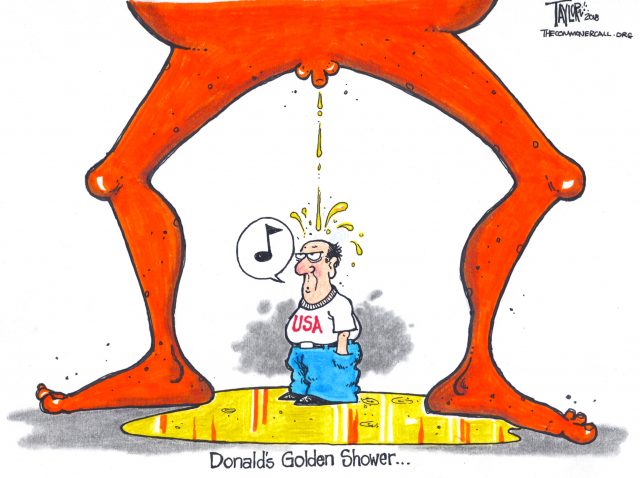 During the presidential election the Huffington Post’s US site carried the following editor’s note at the end of every story about the Republican nominee: “Donald Trump regularly incites political violence and is a serial liar, rampant xenophobe, racist, misogynist and birther who has repeatedly pledged to ban all Muslims – 1.6 billion members of an entire religion – from entering the US.”

Shortly before 6am on that long election night – in between Trump’s winning Iowa and being declared the victor in Pennsylvania – the Washington bureau chief announced that the note would be removed, “in respect for the office”, and that it was time for a “clean slate”.

“The political situation in America is many things: it’s exhausting, exasperating, terrifying, volatile, vulgar, unsustainable and unhinged. The one thing it is not, is normal.”

A year before his election, Fiona Hill, who would become one of Theresa May’s joint chiefs of staff, tweeted: “Donald Trump is a chump #trumpisachump”. Six months later Nicholas Timothy, who would become May’s other joint chief, wrote: “As a Tory I don’t want any ‘reaching out’ to Trump.” Once Trump was elected, however, May couldn’t reach out fast or far enough – the first foreign leader to meet the president, just a week after his inauguration.

During the primaries former Republican presidential hopeful Mitt Romney tweeted: “If Trump had said 4 years ago the things he says today about the KKK, Muslims, Mexicans, disabled, I would NOT have accepted his endorsement.” Almost two years later, Romney decided to run for the Utah senate seat and Trump endorsed him. “Thank you Mr President for the support,” he responded.

According to Tim Shipman’s account in Fall Out, a month before the US election the foreign secretary Boris Johnson told a friend: “This is an election that is going to expose America’s primal pysche as never before. If it is Trump, it will be a victory of really base daytime TV Redneck America.” Last month there was Johnson, on breakfast TV (Fox & Friends) insisting that Trump could be a candidate for the Nobel peace prize, as he unsuccessfully pleaded with the president, via one of his favourite TV shows, not to abandon the Iran nuclear deal.

Power can apply a soothing balm to a raging conscience. In its absence, all kinds of moral positions can be staked out in bold, vivid rhetoric. But it is only in the presence of power that these values are tested. For it is only then that there is a price to pay. In those moments we see whether the lines people have drawn have been carved in stone, so they can stand by them, or etched in sand, ensuring no permanent trace.

So it has been with Trump’s elevation. …

Have We Been Broken? Why Some Have Stopped Fighting Against The Forces Of Oppression

A major component of the craft of maintaining morale is not taking the advertised reality too seriously.

Can people become so broken that truths of how they are being screwed do not “set them free” but instead further demoralize them? Has such a demoralization happened in the United States?

Do some totalitarians actually want us to hear how we have been screwed because they know that humiliating passivity in the face of obvious oppression will demoralize us even further?

What forces have created a demoralized, passive, dis-couraged U.S. population?

Can anything be done to turn this around?

Can people become so broken that truths of how they are being screwed do not “set them free” but instead further demoralize them?

Yes. It is called the “abuse syndrome.” How do abusive pimps, spouses, bosses, corporations, and governments stay in control? They shove lies, emotional and physical abuses, and injustices in their victims’ faces, and when victims are afraid to exit from these relationships, they get weaker. So the abuser then makes their victims eat even more lies, abuses, and injustices, resulting in victims even weaker as they remain in these relationships.

Does knowing the truth of their abuse set people free when they are deep in these abuse syndromes?

No. For victims of the abuse syndrome, the truth of their passive submission to humiliating oppression is more than embarrassing; it can feel shameful — and there is nothing more painful than shame. When one already feels beaten down and demoralized, the likely response to the pain of shame is not constructive action, but more attempts to shut down or divert oneself from this pain. It is not likely that the truth of one’s humiliating oppression is going to energize one to constructive actions.

Has such a demoralization happened in the U.S.?

In the United States, 47 million people are without health insurance, and many millions more are underinsured or a job layoff away from losing their coverage. But despite the current sellout by their elected officials to the insurance industry, there is no outpouring of millions of U.S. citizens on the streets of Washington, D.C., protesting this betrayal. …