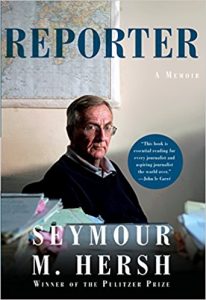 “Some will claim that I have attempted to exploit some dumb, out of service, overly talkative G.I.s. But few men are exposed to charges of murder… it is not a “naming names and telling all affair.” In fact, one of the strengths is that discriminating readers will know how much more I know — and did not tell. I’m convinced that to give the name and hometown of a G.I. who committed rape and murder that day, or one who beheaded an infant, would not further the aim of the book. It is an exposé, but not of the men of Charlie Company. Something much more significant is being put to light. … Both the killer and the killed are victims in Vietnam; the peasant who is shot down for no reason and the G.I. who is taught, or comes to believe, that a Vietnamese life somehow has less meaning that his wife’s, or his sister’s, or his mother’s.”

— Journalist Seymour Hersh letter to colleague regarding his reporting on the My Lai massacre, “Reporter”, 2018. (p. 135)

‘On The Media’ — Seymour Hersh Looks Back

For decades, Seymour Hersh has been an icon of muckraking, investigative reporting: his work exposed such atrocities as the massacre of Vietnamese civilians in My Lai and the torture of Iraqis in Abu Ghraib. He also documented the US’s development of chemical weapons in the 60s, CIA domestic spying in the 70s, wrote a highly critical piece on the raid that killed Osama bin Laden in 2015 and did a whole lot more. Hersh speaks with Brooke about his latest book, Reporter: A Memoir, which chronicles his half century of reporting and the various obstacles he’s encountered along the way.

We spoke to Hersh in 2008 about his My Lai reporting. Listen here.

We spoke to Hersh in 2015 about his bin Laden reporting. Listen here.