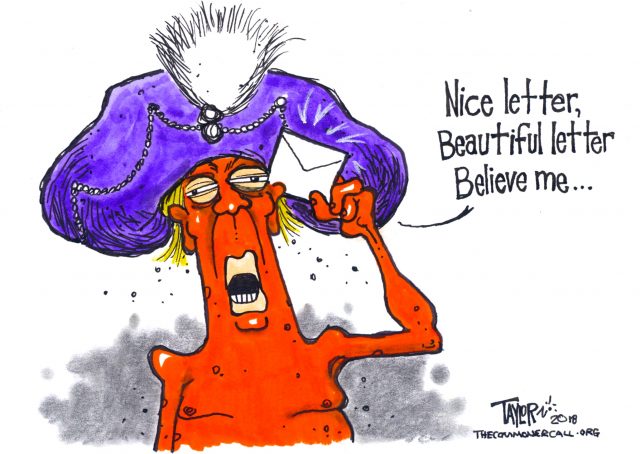 The letter was hand-delivered to the president by senior North Korean official Kim Yong Chol. The White HOuse issued photos of Trump and Kim Yong Chol with a Trumpian scale envelope.

Trump teased the journalists at a press conference, noting, “Oh, would you like to see what was in that letter? How much? How much?”

When asked if Trump could share a sense of the letter’s contents Trump replied, “It was a very interesting letter. At some point, it may be appropriate and maybe I’ll be able to give it to you, maybe.”

Then a few minutes later, in response to another question, Trump said: “I haven’t seen the letter yet. I purposely didn’t open the letter. I haven’t opened it. I didn’t open it in front of the director. I said, ‘Would you want me to open it?’ He said, ‘You can read it later.’”

But, hey, Donald Trump doesn’t actually need to open and read a letter to know all the intimate details. Folks of a certain age will recognize Trump is carrying on a proud tradition begun by that great American seer, Carnac The Magnificent.

Selective Outrage: Chelsea Clinton Points Out Ted Nugent Once Called Hillary Clinton A “Toxic C***t” And Trump Invited Him To The White House

The Trump White House and the Republican party went into predictable cranked-up moralistic hyperventilating overdrive meltdown mode this past week over comedian Samantha Bee’s description of Ivanka Trump as “a feckless c***t”.

A statement from the White House branded Bee’s show Full Frontal as “not fit for broadcast.”

As The Hill reported, Chelsea Clinton, the daughter of former President Clinton, passed along a tweet by Shareblue writer Oliver Willis of President Trump meeting with Ted Nugent — who once called her mother a “toxic c—” — in our nation’s Oval Office.

“You probably can’t use the term ‘toxic c—’ in your magazine, but that’s what she is,” Nugent said of Hillary Clinton. “Her very existence insults the spirit of individualism in this country. This bitch is nothing but a two-bit whore for Fidel Castro.”

Nugent had used the crudity in an interview to describe the then first lady in a 1994 interview in Westword.

Nugent had been accompanied on the visit by Republican Party luminaries Sarah Palin and Kid Rock.

“I keep hoping for consistency too, Oliver. Though I’m not holding my breath!” Clinton tweeted.