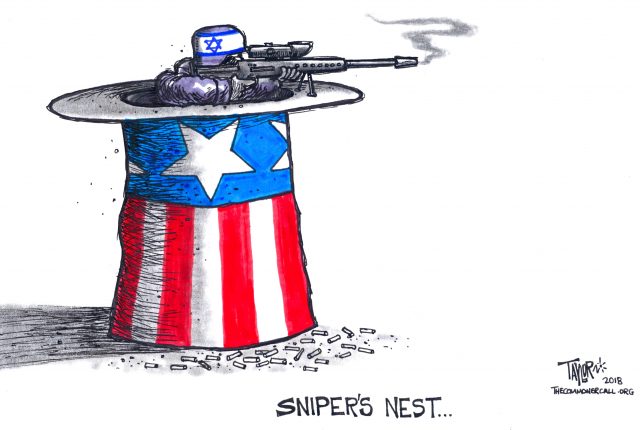 The wholesale, coldly methodical violence by Israeli military forces against thousands of Palestinain protesters this week has been as riveting as it is revolting. As dozens of dead and hundreds of badly wounded were filling the blood-soaked hallways of Gaza hospitals the world was treated to the self-satisfied smugness of Trump’s “little ghoul” daughter Ivanka and her husband and Trump “boy senior adviser” Jared Kushner and chortling Israeli officials at a swanky “opening” of the new American embassy in Jerusalem (which actually hasn’t yet been built).

As gut wrenching as the systematic, officially sanctioned Gaza killings were there was another aspect of the shootings ignored by Israeli-coddling American mainstream media. Last Friday (5/11/18) Democracy Now! interviewed Laleh Khalili, professor at SOAS University of London. She’s the author of a number of books, including Time in the Shadows: Continement in Counterinsurgencies.

As Khalili revealed, the Israeli attacks had an especially coldly pernicious aspect:

“What has also been quite terrible about this, but what has revealed, again, another modus operandi of the Israeli state, is that in addition to the 40-something, 47, people that have been shot dead, often by sniper fire, often through the eye or through the forehead, has been the number, the vast number, the actually surprising number, of people who have been injured, many of them maimed permanently. Some of those who have been injured have been shot, for example, in their spine, and therefore they will not ever be able to walk again. Now, this has also been a modus operandi of the Israeli state. Such casualties very often don’t get as much attention as deaths do. And maimings and injuries, of course, place an enormous amount of cost, economic cost as well as emotional and the human cost, on not only those who have been injured, but also on their families. Again, this is a complete and total modus operandi of Israeli counterinsurgency. It engages in military warfare alongside with other kinds of activities that tend to have enormous economic and social costs.

“And what has been quite interesting is the extent to which this has gone uncommented upon. Now, here in London, there are NGOs that specifically address these kinds of medical needs, one of them being Medical Aid for Palestinians. And they have been, for example, trying to highlight some of these enormous economic and social costs that come from maimings and injuries of Palestinians, but we don’t hear very much of it. And again, it is—in some ways, it’s profoundly disappointing that the press is not more interested in this.”

Reports by human rights observers on the ground emphasized the inhumane tactical terrorism of the Israeli government.

“Half of the more than 500 patients we have admitted in our clinics have injuries where the bullet has literally destroyed tissue after having pulverized the bone”, said Marie-Elisabeth Ingres, Head of Mission of Medecins sans Frontieres in Palestine. “These patients will need to have very complex surgical operations and most of them will have disabilities for life.”

In the United States a growing number of Jews are increasingly uneasy with Israel’s apartheid system and the ongoing cycles of state violence against innocent Palestinians. But it is important for all Americans to remember that the blood of this week’s shootings is not just on the hands of the Israelis. It is on our hands as well, given the United States is firmly yoked to Israeli militancy and mum on right wing racist Israeli policies beyond the needlessly provocative embassy move. This bond with Israeli brutality is bipartisan as both political parties have behaved cowardly in enabling, minimizing and defending Israeli war crimes.

Because of our amoral, blind and blinkered blank-check support, Israel’s crimes this week are our crimes and the blood debt is jointly owned. The inevitable day of reckoning will be needlessly tragic for all.

Front page Of The Week… 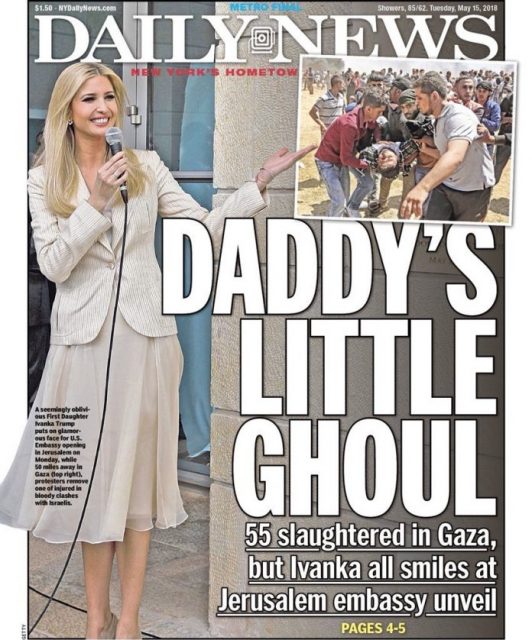