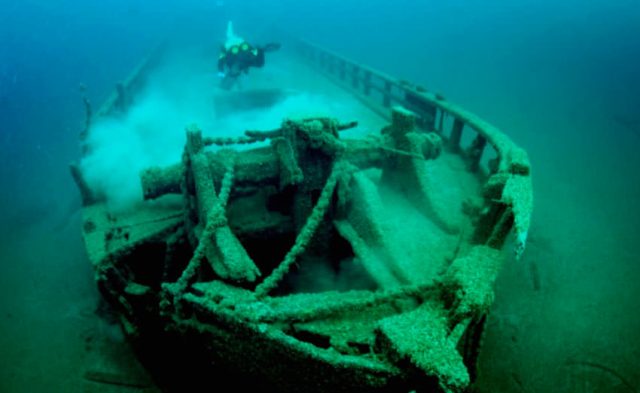 A diver explores the schooner Home, one of the oldest shipwrecks discovered in Wisconsin. (Photo by Tamara Thomson, Wisconsin Historical Society via www.sanctuaries.noaa.gov/wisconsin/

When Gov. Scott Walker rescinded his nomination for a federal designation of a marine sanctuary north of Milwaukee on March 6, he caught a lot of people by surprise.

Walker had made the nomination back in 2014 with the support of the municipalities in the area,  including Manitowoc, Port Washington, Sheboygan, and Two Rivers. The designation was supposed to preserve the area for scuba divers and others interested in shipwrecks. And it was expected to boost tourism in the area.

So why did Walker, who brags about boosting tourism, all of a sudden change his mind on the Wisconsin-Lake Michigan National Marine Sanctuary?

Well, it turns out that some right wing ideologues, along with Lake Michigan property owners, made a stink.

Jim Zeiler is president of a group  called Citizens for Responsible Zoning and Landowner Rights, based in Hudson, clear across the state. Zeiler, who was named “Volunteer of the Year” in 2009 by Americans for Prosperity Wisconsin, claimed that the National Oceanic and Atmospheric Administration was somehow going to take over Lake Michigan.

The Wisconsin Conservative Coalition, consisting of four tea party groups, also opposed the designation, as did some lakefront property owners.

Learn More About The Sanctuary HERE.