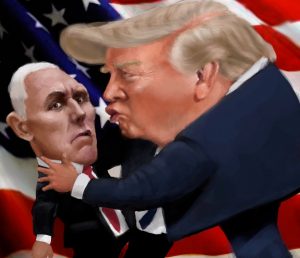 Pence is what he has chosen to be, which is horrifying.

Donald Trump, with his feral cunning, knew. The oleaginous Mike Pence, with his talent for toadyism and appetite for obsequiousness, could, Trump knew, become America’s most repulsive public figure. And Pence, who has reached this pinnacle by dethroning his benefactor, is augmenting the public stock of useful knowledge. Because his is the authentic voice of today’s lickspittle Republican Party, he clarifies this year’s elections: Vote Republican to ratify groveling as governing.

Last June, a Trump Cabinet meeting featured testimonials offered to Dear Leader by his forelock-tugging colleagues. His chief of staff, Reince Priebus, caught the spirit of the worship service by thanking Trump for the “blessing” of being allowed to serve him. The hosannas poured forth from around the table, unredeemed by even a scintilla of insincerity. Priebus was soon deprived of his blessing, as was Tom Price. Before Price’s ecstasy of public service was truncated because of his incontinent enthusiasm for charter flights, he was the secretary of health and human services who at the Cabinet meeting said, “I can’t thank you enough for the privileges you’ve given me.” The vice president chimed in but saved his best riff for a December Cabinet meeting when, as The Post’s Aaron Blake calculated, Pence praised Trump once every 12 seconds for three minutes: “I’m deeply humbled. . . . ” Judging by the number of times Pence announces himself “humbled,” he might seem proud of his humility, but that is impossible because he is conspicuously devout and pride is a sin.

Between those two Cabinet meetings, Pence and his retinue flew to Indiana for the purpose of walking out of an Indianapolis Colts football game, thereby demonstrating that football players kneeling during the national anthem are intolerable to someone of Pence’s refined sense of right and wrong. Which brings us to his Arizona salute last week to Joe Arpaio, who was sheriff of Maricopa County until in 2016 voters wearied of his act.

Noting that Arpaio was in his Tempe audience, Pence, oozing unctuousness from every pore, called Arpaio “another favorite,” professed himself “honored” by Arpaio’s presence, and praised him as “a tireless champion of . . . the rule of law.” Arpaio, a grandstanding, camera-chasing bully and darling of the thuggish right, is also a criminal, convicted of contempt of court for ignoring a federal judge’s order to desist from certain illegal law enforcement practices. Pence’s performance occurred eight miles from the home of Sen. John McCain, who could teach Pence — or perhaps not — something about honor. …

“Because his is the authentic voice of today’s lickspittle Republican Party, he clarifies this year’s elections: Vote Republican to ratify groveling as governing.” — George Will on Mike Pence

Donald Trump and the spectacle of his presidency didn’t metastasize out of thin air. Trump is the manifestation of the Republican party. He is sewn from the whole cloth … the pointed white hood of Republican orthodoxy.
The republican party has been a yeasty petri dish for this ugliness going back to the 1964 campaign of Barry Goldwater and sanctified by Ronald Reagan’s candidacy announcement in 1980 in Mississippi’s Neshobo County, the location of the 1964 grisly murder of three civil rights workers by local members of the KKK: “Critics claim that Reagan’s choice of location for the speech (the fairgrounds were about 7 miles from Philadelphia, Mississippi, a town associated with the murders of Chaney, Goodman, and Schwerner in 1964) was evidence of racial bias.”
It was no accident that he chose that location. They specifically picked it. Reagan told the adoring crowd of yahoos, “I believe in states’ rights.”
We all know what that means, and certainly the racists and America’s 35% fascist slice of the population knew exactly what he was saying. If there was any doubt his campaign manager and political Svengali Lee Atwater made things clear: “You start out in 1954 by saying, “Nigger, nigger, nigger.” By 1968 you can’t say “nigger”—that hurts you, backfires. So you say stuff like, uh, forced busing, states’ rights, and all that stuff, and you’re getting so abstract. Now, you’re talking about cutting taxes, and all these things you’re talking about are totally economic things and a byproduct of them is, blacks get hurt worse than whites.… “We want to cut this,” is much more abstract than even the busing thing, uh, and a hell of a lot more abstract than “Nigger, nigger.””
And of course that staid republican statesman (CIA chief and probably more) H.W. Bush wasn’t above playing and dealing out the stinky race card with his race-baiting Willie Horton ad.

Oh, no, Trump is no anomaly. He is the direct creation — the logical intellectual outcome — of all those good principled conservatives over the past 50 years who gave a wink and a nod to racism, militarism, slander about ‘welfare queens’, and calls to eliminate Social Security, Medicare, Food Stamps, early child programs etc. They were there pulling the trigger when the Black Panther’s Fred Hampton was slaughtered in his bed. Nixon did the right thing on a few issues — like EPA — but only because he was scared shitless that he would be dragged from his bed some night and lynched in the Rose Garden by a bunch of LSD-addled love children Marxist hippies.

I don’t recall George Will leading a charge against any of those Reagan standards. George Will has licked up his share of GOP spittle.

My good Dane County Republican John Birch Society father was far ahead of the curve in the late 1960’s, but he was definitely part of the curve of the mainstream republican party.
As for George Will? Better late than never but he has plenty of blood on his hands. He helped mold the Frankenstein he and his greedy, arrogant, race baiting corporate pals cobbled together in the Koch brothers’ lavish underground bunker. They deserve Trump.
We don’t, but they do.
So, yes, it’s great George Will is speaking up. Good for him. We just need to remember that Trump is not anything new and George Will played a role in creating the republican party Trump now browbeats into submission.