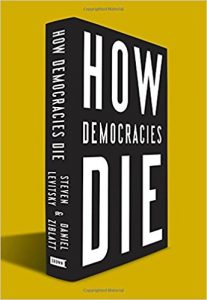 “In his 1964 essay “The Paranoid Style in American Politics,” historian Richard Hofstader described the phenomenon of “status anxiety,” which, he believed, is most likely to emerge when groups’ social status, identify, and sense of belonging are perceived to be under existential threat. This leads to a style of politics that is “overheated, over suspicious, over aggressive, grandiose, and apocalyptic.” Half a century after its publication, Hofstader’s essay may be more relevant than ever. The struggle against declining majority status is, in good part, what fuels the intense animosity that has come to define the American Right. Survey evidence suggests that many Tea Party Republicans share the perception that the country they grew up in is “slipping away, threatened by the rapidly changing face of what the believe is the ‘real’ America.” To quote the title of sociologist Arlie Hochschild’s recent book, they perceive themselves to be ‘”strangers in their own land.”

“This perception may explain the rise of a discourse that distinguishes “real Americans” from those associated with liberals and the Democratic Party. If the definition of “real Americans” is restricted to those who are native-born, English-speaking, white, and Christian, then it is easy to see how “real Americans” may view themselves as declining. As Ann Coulter chillingly put it, “The American electorate isn’t moving to the left — it’s shrinking.” The perception among Tea Party Republicans that their America is disappearing helps us understand the appeal of such slogans as “Take Our Country Back” or “Make America Great Again.” The danger of such appeals is that casting Democrats as not real Americans is a frontal assault on mutual toleration.”