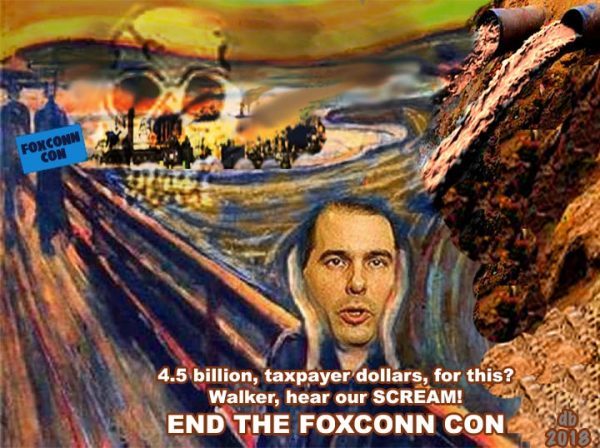 When one lives under the tyranny of one party rule,
our laws and constitution don’t matter to the party in power.
They can just rewrite them to suit their tyrannical wants.
#EndTheTyranny    #VoteBlue2018

*****
Chicago Tribune — “The Trump administration on Tuesday exempted most of southeast Wisconsin from the latest federal limits on lung-damaging smog pollution, delivering a political victory to Gov. Scott Walker as he makes a new Foxconn Technology Group factory the centerpiece of his re-election campaign. By dramatically reducing the size of the areas required to crack down on smog, Trump EPA Administrator Scott Pruitt overruled the agency’s career staff, a move that will save Foxconn from having to make expensive improvements as it builds a sprawling new electronics plant in Racine County, just north of the Illinois border in an area with some of the state’s dirtiest air.” Read the Rest at: EPA chief Pruitt Overrules Staff, Gives Wisconsin’s Walker, Foxconn Big Break On Smog.
*****
Chicago Sun Times — “Last week, in an earlier attack on our regional natural resources, Wisconsin officials approved a request to pull millions of gallons of additional water each day from Lake Michigan for use by Foxconn. The decision, by the Wisconsin Department of Natural Resources, was made without the approval of the other seven states, including Illinois, that normally would be consulted. Wisconsin and Foxconn did an end-run around the regional approval process by, among other dodges, claiming the water would be for a “public use.” And, in fact, a small amount of the water withdrawn will serve residential customers in the small town of Mount Pleasant, where Foxconn plans to build its plant. The rest goes straight to the company.” Read the Rest at: EDITORIAL: A Big Factory Gets To Pollute, And You Get To Wheeze.
(Meme by Dennis Brault.)