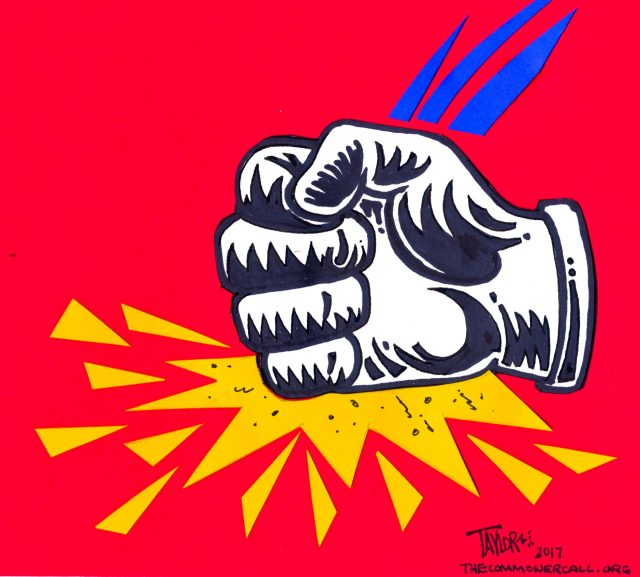 These recent incidents are part of a broader government scheme to wield immigration authority to silence activists both within and beyond the US borders.

The Trump administration has explained that its so-called “extreme vetting” program is intended to bar individuals from the United States based on their attitudes toward this country. It is the fulfillment of a campaign promise to resurrect a cold war–era “ideological screening test” for admission into the United States. If the growing number of activists who have been denied admission or removed from the country in recent months is any indication, that test is tricky to pass.

Hours after landing in Minneapolis on Wednesday, Yassmin Abdel-Magied was on a flight back to London. Border agents reportedly pulled her aside upon arrival, took her cellphone, and – following a minutes-long review of her case – canceled her visa and denied her entry into the country.

The exclusion and removal of activists and other individuals invited to speak in the United States denies American audiences the opportunity to hear from diverse viewpoints around the world – a right that the first amendment presumptively protects.

A prominent Muslim Australian activist, Abdel-Magied was scheduled to speak at the PEN World Voices Festival in New York, including at one event prophetically titled The M Word: No Country for Young Muslim Women. US Customs and Border Protection (CBP) claimed Abdel-Magied was traveling on the wrong visa, though she had traveled to the United States on the same visa for similar events in the past.

Without more information, we can’t say definitively that CBP’s justification for turning Abdel-Magied away was pretextual. But her experience aligns with those of other activists, artists and experts who have been denied entry into the United States in recent months.

Earlier in April, a Toronto-based Syrian trans activist named Ziva Gorani was reportedly denied a visa to speak at an LGBTQ conference in New Jersey. In February, the producer of the Academy Award nominated film Last Men in Aleppo, Kareem Abeed, was denied a visa to attend the ceremony. And in January, the Iran-born and London-based neuroscience PhD student Arman Eshaghi was denied entry to the United States to participate in a scientific conference.

American activists, too, have confronted increased government scrutiny at the border. …

(Carrie DeCell is a staff attorney at the Knight First Amendment Institute.)

(Commoner Call illustration by Mark L. Taylor, 2017. Open source and for non-derivative use with link to www,thecommonercall.org )

Shortly after his inauguration, President Trump issued an executive order directing agency heads to develop a program of “extreme vetting” of immigrants, refugees, and visitors to the United States, and in May the State Department adopted a questionnaire requesting that certain visa applicants  disclose their social media handles. In October of 2017, the Department of Homeland Security further indicated that it intends to maintain records of the social media accounts of immigrants, including naturalized U.S. citizens and lawful permanent residents, beginning on October 18.

After filing a FOIA request on August 7 seeking records relating to the government’s consideration of individuals’ speech, beliefs, or associations when making immigration decisions, the Knight Institute followed with a lawsuit to obtain these records. The documents sought by the Knight Institute concern the government’s claimed authority to exclude or remove non-citizens from the United States based on their speech, beliefs, and associations, and those relating to new screening policies focused on expressive and associational activity.

Link to Story and Suit Details