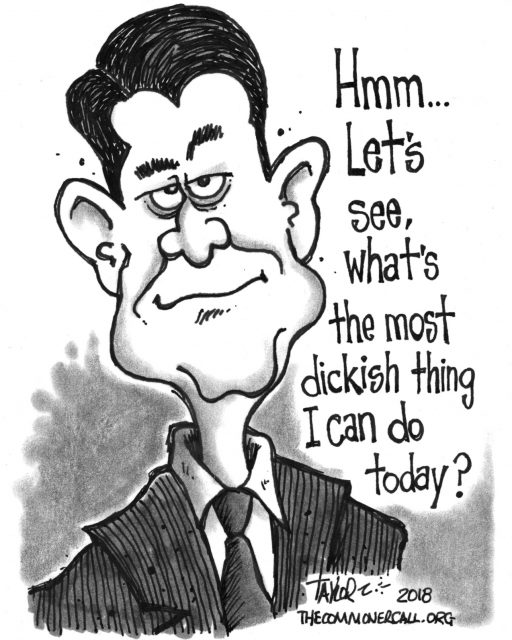 WASHINGTON ― House Chaplain Patrick Conroy was suddenly forced out of his job last week by Speaker Paul Ryan (R-Wis.), and while it’s not clear why, Democratic lawmakers and Hill sources say it was driven by Ryan’s distaste for one of Conroy’s prayers about the GOP’s tax bill.

As first reported by The Hill, Conroy was clear in his resignation announcement that it wasn’t his choice to go. It was Ryan’s.

“As you have requested, I hereby offer my resignation as the 60th Chaplain of the United States House of Representatives,” reads Conroy’s letter to Ryan, dated April 15. Conroy, who has been the chaplain since 2011, will officially resign on May 24.

The Hill reported that four different sources ― two Democrats and two Republicans ― said Conroy was told he had to quit or he would be fired. There’s been no reason given for why he was let go, but Rep. Gerry Connolly (D-Va.) tells HuffPost that his GOP colleagues have pointed him to a prayer that Conroy made on the House floor last fall amid the debate on the GOP tax bill.

Here’s that Nov. 6 prayer, in which Conroy wishes for no “winners and losers” under the legislation. As has been reported, the tax bill greatly benefits the rich over time. …

(Commoner Call cartoon by Mark L. Taylor, 2018. Open source and free to use for non-derivative use with link to www.thecommonercall.org )

Former altar boy and Esquire writer-at-large Charles Pierce slammed Speaker Paul Ryan (R-WI) for politicizing the office of Congressional chaplain during a Friday appearance on MSNBC’s “All In with Chris Hayes.”

“Democrats and Republicans in the house are outraged after Paul Ryan’s unexplained dismissal of the chaplain about the House, 148 members today sent a letter about the forced resignation of Patrick J. Conroy, the first ousting the House chaplain in congressional history,” Hayes noted. “Ryan’s office won’t say on the record why Conroy was effectively fired.”

“You know, there’s an old saying among we former altar boys, ‘if a sermon is uncomfortable, figure out why it makes you uncomfortable’ — don’t blame the person delivering the sermon,”

“I just don’t think there’s anything more Paul Ryan can screw up in this job,” Pierce argued. “Firing the chaplain?”

“You know, it should be a nonpartisan position, that does seem like a pretty clear like needling and if you think that the House chaplain is using his position to kind of like subtly, you know, orate against your legislative priorities, like, I can understand being angered by that,” Hayes suggested.

“You asking me this question?” Pierce wondered. “I think it’s the silliest thing I’ve ever heard.”

“The guy is a priest, he’s there to pray,” he continued. “He’s drawing his prayer, as near as I can tell, strictly from the gospels.” …