Editor’s note: To provide a full picture of what hate speech victims experienced, we have not edited out offensive language.

It was the day after the 2016 presidential election. Melissa Johnson was walking out of a Trader Joe’s in the heart of San Diego when a shiny BMW pulled up alongside her. The driver was a man in his late 30s. Dark hair. Green eyes. Her first thought: He’s kind of hot.

The car slowed down. Then the man shouted at her through the open window.

“Fuck you, nigger, go back to Africa. The slave ship is loading up,” he said. Then he added an exclamation point: “Trump!”

As the man drove away, Johnson, looked around at the shoppers who had witnessed the attack. She was the only African American in the parking lot. Not one person met her eye. Nobody said anything. So the 37-year-old walked, stunned, to her car, where she sat and wept.

Nearly every metric of intolerance in the U.S. has surged over the past 18 months, from reported anti-Semitism and Islamophobia to violent hate crimes based on skin color, nationality or sexual orientation.

This renaissance of hate features something new: xenophobic, racist and homophobic attacks punctuated with President Donald Trump’s name. To understand the scope of the phenomenon, Reveal from The Center for Investigative Reporting identified more than 150 reports of Trump-themed taunts and attacks stretching across 39 states over the past year and a half.

Interviews with the targets of and witnesses to these incidents showed a striking pattern. The abusers had a clear message: Trump’s going to take care of a problem – and that problem is you. 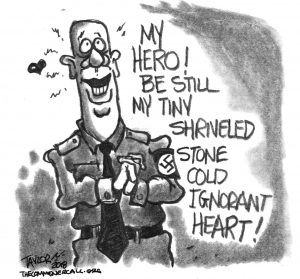 “You know, you’re still going to hear the occasional backwater person use the N-word, and that’s unacceptable. But we didn’t hear it as directly and as comfortably – the nasty things that people are saying right now.”

This pattern extended across races, religions and sexual orientation. Two days after the presidential election, a gay man in Michigan heard a taunt from a group of men: “Trump is going to get rid of people like you.” A week later, a Jewish woman in Austin, Texas, said she heard exactly the same threat from a middle-aged white man as she lined up to buy groceries. Two months later, a Latino man in California said he was told by a white ex-girlfriend that Trump was going “get rid of the Hispanics.” By March, a black woman in Houston reported that she was told by a white man that Trump was going to “get rid of all you niggers.”

Immediately after the election, there was a surge in Trump-related taunts. But all last year and into this year, the threats kept coming: An Asian American woman in Hollywood, California, had her hair pulled by an older white woman and was told that she had to “go back to China” now that Trump is president. In the Washington, D.C., area, the Trump-tainted threats got so frequent and so bad that Mohammad Qureshi, a Muslim American man who works at the Dulles Airport Marriott, changed his nametag to John.

These interviews reveal the trickle-down effect of a president who has called Mexicans rapists, proposed barring Muslims from entering the country and denigrated certain nations as “shithole countries.” Sometimes the perpetrators quoted the president’s words nearly verbatim. Other times, they signaled that as far as they’re concerned, the country has changed in their favor now that Trump is in charge.

For most of those targeted, it wasn’t the first time they have heard hateful speech. But dozens of people interviewed for this story said we’ve entered a new era of hate – one of open, blatant shouts, not whispers. And now that hate features a presidential seal of approval.

Racism in America used to be more subtle, Johnson said. As she shopped for dresses and handbags at Nordstrom, she said the security guards would follow her. The old lady in the elevator would clutch her Louis Vuitton bag a little tighter in the enclosed space – never mind that Johnson has five of those bags herself. Neighbors discouraged their son from dating her.

“Trump is giving these people so much power, so that they feel as though they’re also running the country,” Johnson said. “These horrible, ugly people now have a voice. And I’m so tired of hearing it because I’ve heard it my entire life. But it was whispers before. Now they’re yelling.”

Reveal culled the reports of Trump-themed attacks from Documenting Hate, a media collaborative led by ProPublica that tracks hate incidents across the country. Overall, Documenting Hate has received more than 300 reports of people using Trump’s name in hate speech since the effort launched in January 2017. That’s out of about 4,700 total tips.

Reveal spoke with more than 80 people who reported the Trump-themed cases, and located another 70 that had been reported by other media organizations or confirmed with documentation.

Most of the victims of abuse by Trump supporters said they’re scared. But their fear isn’t just that they will be attacked again by people emboldened by Trump. They worry that America has taken a step backward after generations of civil rights gains. …

Read the Rest and 52-Minute Audio